Figure 1 shows the changes in the crude divorce rate over a longer time period. After very low rates in the first half of the twentieth century, the crude divorce rate rose in the 1960s and 1970s. It peaked at 4.6 per 1,000 resident population after the introduction of the Family Law Act 1975 (Cth) that came into operation in January 1976 and allowed no-fault divorce. As some long-term separations were formalised and some divorces that had been filed in the previous years were brought forward, this contributed to the steep rise of divorce in 1976.

Although the COVID-19 pandemic led to wedding cancellations and a decline in the marriage rate in 2020, impacts of the pandemic on divorce rates may take time to manifest fully. This is because divorces are typically after a period of separation with a legislative requirement for 12 months of separation to be established before a divorce can be granted – see below for data on this.

Note: Crude divorce rate: Number of divorces per 1,000 of estimated resident population at June for each reference year.

At what age are couples divorcing?

Figure 2 shows the median age of men and women at divorce. The median age rose from the early 1980s, reflecting that people were marrying later (see fact sheet on Marriages). 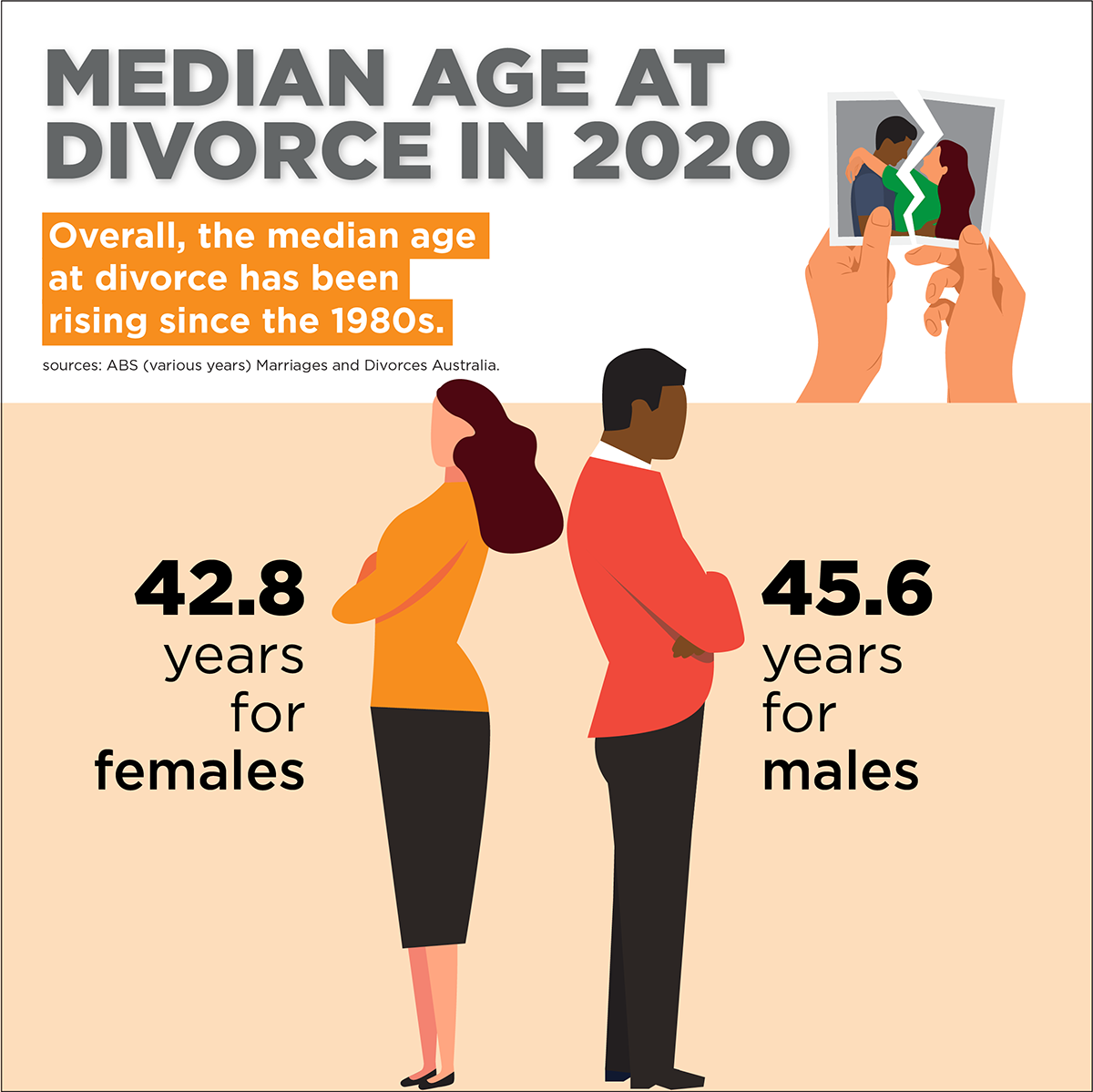 Duration of marriage to divorce

Figure 3 shows the distribution of how long, in years, men and women had been married before they separated and before the final granting of the divorce.

The largest proportion of couples separating and then divorcing were married for nine years or less. In 2020, 56% of separations and 41% of divorces were couples in this category. This showed little change from 2019.

What about the children?

The proportion of divorces involving children under 18 years has fallen since the 1970s, from 68% in 1975 to 47% in 2014. It has remained at around this percentage in recent years, shifting slightly higher, to 49%, in 2020. The general declining trend is partly due to the rise in divorces of long-term marriages where children have grown up. An overall decline in the fertility rate and rise in childlessness may also contribute to the fall in the proportion of divorces involving children. The apparent increase in 2020 was consistent with the downward movements in the median age at divorce in the last two years. Whether this change was a short-term fluctuation or the start of a reversing trend will not be known until sometime in the future.

Facts and Figures
Published by the Australian Institute of Family Studies, February 2022

Report no. 4: Impacts of COVID-19 on pregnancy and fertility intentions

This report explores the impacts of COVID-19 on women who were expecting or planning to have a child, and the effect on women’s future plans.