Although the Australian population has doubled in size since the early 1970s, the number of marriages registered each year has not increased over this time. The yearly number has instead fluctuated between 100,000 and 120,000 (Figure 1). The number of marriages registered in 2019 (113,815) was lower than in 1970 (116,066). The impact of the COVID-19 pandemic on marriages in 2020 is also evident (Figure 1). Lockdowns and restrictions led to wedding cancellations and the postponement of wedding plans.1 According to the Australian Bureau of Statistics (ABS), in 2020, there were only 78,989 registered marriages, representing a decline by 30% from 113,815 the previous year. 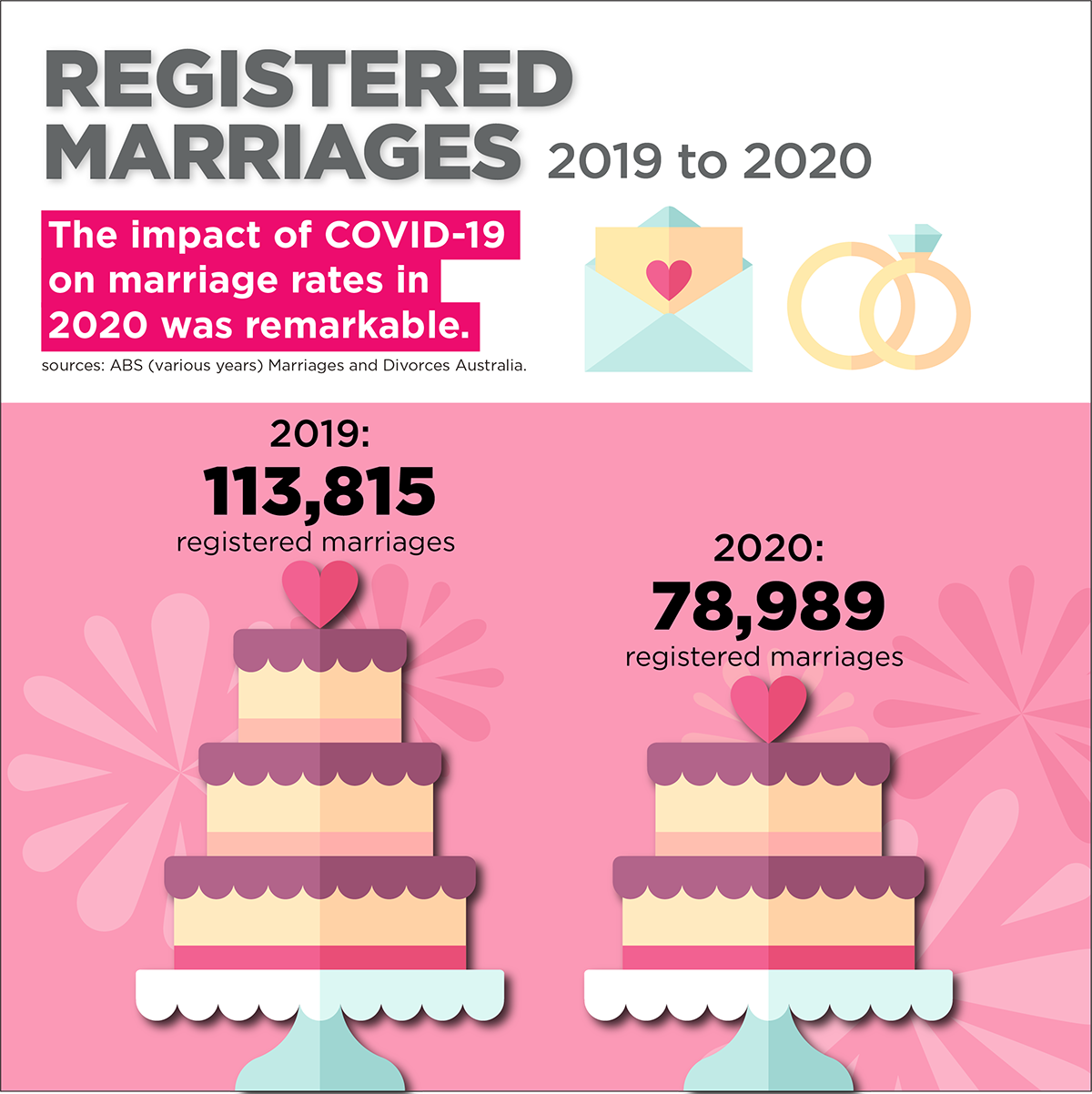 The crude marriage rate (the number of marriages registered in a year per 1,000 Australian residents) fluctuated across the first half of the twentieth century. The all-time high was in 1942. Following an increase in the 1960s, the rate began to fall steadily from 1970 until 2000. It then stabilised for a decade before falling again.

The fall in the marriage rate over the last half century has been influenced by a range of demographic and social changes, including extended time in pursuing education beyond Year 12 with increasing demands for a skilled workforce; increased labour force participation of women, especially mothers; the availability of the pill, which enabled a disconnection between marriage and childbearing; the rise in cohabitation, and a change in attitudes towards marriage. See Weston, Stanton, Qu, and Soriano (2001) for a discussion of social changes contributing to these trends.

As with the number of marriages, the crude marriage rate was especially low in 2020 because of the impact of COVID restrictions. In 2020 the rate was 3.1 marriages per 1,000 Australian residents, the lowest rate ever recorded.

Notes: Crude marriage rate: number of marriages per 1,000 of estimated resident population at June for each reference year. Same-sex marriage was legalised in Australia in December 2017 and figures from 2018 onwards include same-sex marriages.

The effects of the COVID pandemic on marriage numbers are most apparent when viewed by state and territory, given the varied experiences of COVID-related restrictions across different parts of Australia in 2020. Figure 2 shows the state variation in crude marriage rates. While all states experienced a decrease in marriage numbers, Victoria experienced the largest decrease in this rate compared to previous years.

Aside from the impacts of COVID, this figure also shows that the crude marriage rates are typically lower in the two territories – the Northern Territory (NT) and the Australian Capital Territory (ACT) – compared to the states, and usually highest in New South Wales (NSW). In 2020 these patterns were different, although NT continued to have the lowest crude marriage rate overall.

Note: Crude marriage rate: number of marriages per 1,000 of estimated resident population at June for each reference year.

When do we marry?

At a state level (data not shown – refer to ABS data) the impacts on marriages in the early months of the year were felt equally across Australia. In the latter half of the year, the marriage numbers had rebounded to above 60% of the previous year in most states, with numbers for Tasmania and the NT as high as 90%. Numbers for Victoria were the exception, where a second lot of COVID restrictions meant September had only 192 marriages registered, compared to 1,981 the previous September.

Figure 4 shows the proportion of marriages that were first marriages for both partners since 1960. The proportions of first marriages were 85%–87% in the 1960s. This fell sharply to 71% in 1976 when the no-fault principle was introduced through the Family Law Act 1975 (Cth), allowing couples who filed for divorce in previous years to finalise their divorce and remarry. The rate of first marriages remained stable from the late 1970s to the mid-2000s (66%–67%), with a progressive increase in the following years and, from 2013, becoming stable again at 72%–73%.

Figure 4: First marriages as a proportion of all marriages, 1961–20

How old are we when we marry?

Living together before marriage

Figure 6: Marriages by celebrants and ministers of religion, 1902–2020 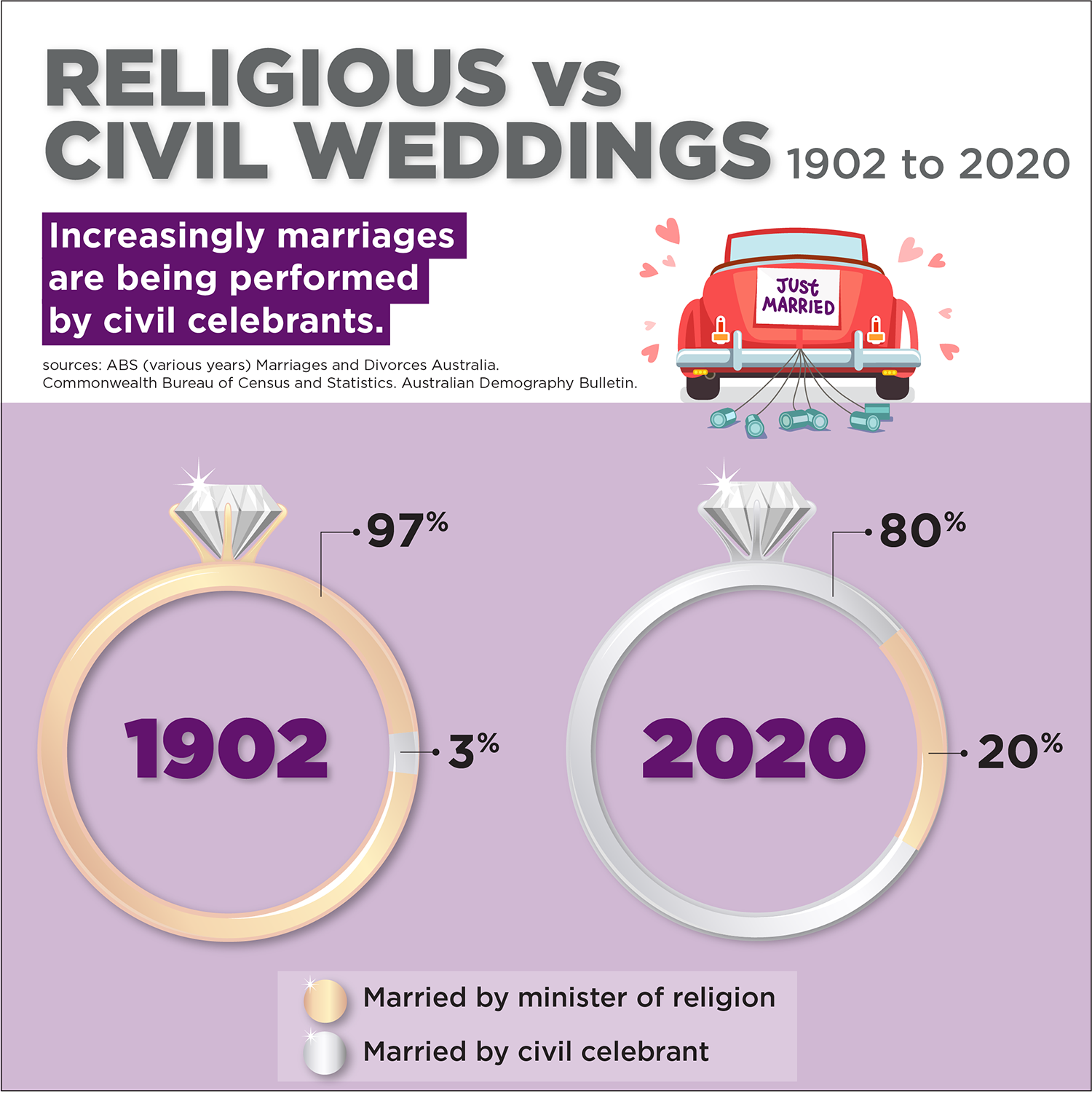 1 In addition to restrictions on large gatherings, venue capacity limits and border closures, many states had specific restrictions on the number of guests attending weddings at some time during 2020. At the height of restrictions in Victoria, weddings were only permitted for compassionate reasons.

Facts and Figures
Published by the Australian Institute of Family Studies, February 2022

Figures around divorces in Australia: divorce rate, duration of marriage at divorce, and the extent to which divorces involved children.

Report no. 4: Impacts of COVID-19 on pregnancy and fertility intentions

This report explores the impacts of COVID-19 on women who were expecting or planning to have a child, and the effect on women’s future plans.