This fact sheet uses reports from parents and children in Growing Up in Australia: The Longitudinal Study of Australian Children (LSAC) to reflect on how everyday things parents do with their children can increase their children’s health and happiness.

Children's early experiences are moulded by their family environments - by their relationships with parents, siblings, other family members or friends (and how they spend time with them), and by the characteristics of their home environment and neighbourhood. As children grow, their lives are increasingly exposed to the world beyond their family - through child care, preschool and school. Their experiences in these environments, as well as with their families, expand children's opportunities and developmental influences.

To support the 2010 National Families Week, the Australian Institute of Family Studies (AIFS) has prepared this Facts Sheet about the role that families and communities play in giving children the best possible start to life. The theme for Families Week in 2010 is "The best start: Supporting happy, healthy childhoods". This theme reflects the importance of the everyday things parents do with their children and the role this plays in ensuring children have both happy and healthy childhoods.

Growing Up in Australia: The Longitudinal Study of Australian Children (LSAC) has been collecting valuable information about children from birth to the beginning of middle childhood (8-9 years of age). Using LSAC data from 2004 to 2008, this Facts Sheet addresses key questions about the health and happiness of our children, including:

There is growing recognition of the importance and value of including children's own assessment of their wellbeing in assessments of how children are doing (e.g., Crivello, Camfield, & Woodhead, 2009). Therefore, this Facts Sheet includes reports from both parents and children.

The health of Australian children

In 2008, most Australian children were in good health, with nine in ten parents (89%) saying that their child was in excellent or very good health (Department of Families, Housing, Community Services and Indigenous Affairs [FaHCSIA], 2009).

While most Australian children were in good health, there were some significant health problems facing a substantial minority of children. A key issue was obesity. In 2008:

Time spent with parents, other adults and other children

Children of all ages typically spend many waking hours a week in the company of their parents (see Figure 1). Children spent more time on weekends with their parents (9.5-10.6 hours per day) than on weekdays (6.0-9.1 hours). The difference between weekdays and weekends was small for younger children (less than 1 hour), but became quite substantial for older children (3.8 hours).

Figure 1. Children's awake time with parents, by age of child, weekend or weekday 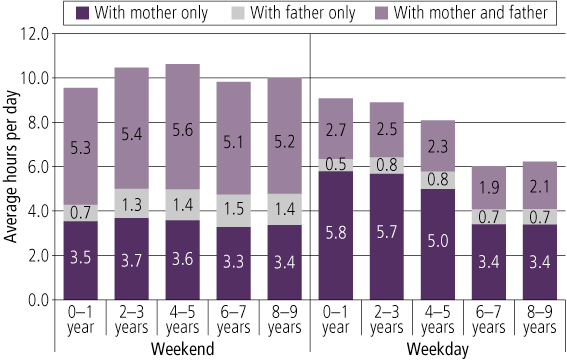 Even on weekends, children spent only a relatively small number of hours with their father when their mother was not present - varying from 0.7 hours per day for infants to 1.3-1.5 hours for 2-3 years and older.

As they grow up, children spend time with a widening range of people and experience a wider range of settings. Increasing amounts of their time are spent with people other than their parents and as they gain independence they also increasingly spend time either alone or with other children (Figure 2).

Figure 2. Children's awake time with parents and others, by age of child, weekend or weekday

Children also said that they had fun with their families:

Children who had a parent living elsewhere with whom they had some contact were mostly positive about the time they spent with this parent. When 8-9 year old children with a father living elsewhere were asked whether they liked spending time with their father:

Children are likely to be involved in various day-to-day activities with their parents or others in the family. These shared activities not only help them to develop particular skills, such as learning to read, but they are also important for the socio-emotional development of children (Coleman, 1988).

Activities shared between children and their parents that LSAC asks about include: everyday activities, such as cooking or caring for pets; playing outdoors; and reading to the child or helping with homework.

Figure 3 shows how often parents undertook these types of shared activities with their child. Most 4-5 and 8-9 year olds were involved in helping with everyday activities each week with one of their parents, with around 40% of these children helping out on 6 or 7 days of the week. The involvement of parents with their children on this activity was virtually the same for both age groups.

Figure 3. Activities parents do with their children, by age of child

Reading to children and helping with their homework are two ways parents can be involved with their children's cognitive development. At 4-5 years, around half of the children were read to on most days of the week, with another 27% being read to 3-5 days per week. By the time children reach 8-9 years of age, being helped with homework may gradually replace being read to as children become more independent in their reading, so these two activities have been combined here. At 8-9 years, parents were a little less involved in both reading to and helping with homework than they were at the earlier age, although very few children were not read to or not helped with their homework at all in the past week (7% of 4-5 year olds and 8-9 year olds).

Beyond these everyday family experiences, children may be given opportunities to participate in activities outside the home with their family. Parents in LSAC were asked about a range of activities they did with their children in the month prior to the interview. It was found that among 8-9 year olds:

There is now strong evidence that the type of neighbourhood in which a child lives can have an impact upon their wellbeing, how they learn and their future life chances (Edwards, 2005).

LSAC data show that parents were generally very positive about their neighbourhoods, most agreeing or strongly agreeing that they had a safe neighbourhood, with good parks, playgrounds and play spaces, and good access to public transport and basic services.

A minority of parents reported negatively about their neighbourhoods, and we know that living in these neighbourhoods is likely to be associated with other pressures, such as financial ones, that might also contribute to poorer outcomes for children. For example, for children aged 8-9 years, 17% of mothers in jobless families said they disagreed or strongly disagreed with the description of their local area as being a safe neighbourhood, compared to 5% of those families with at least one parent in employment.

Figure 4. Quality of neighbourhoods in which children live, by age of child

In LSAC, when 8-9 year old children were asked how often they felt happy:

Having a positive and rewarding school experience is very important to children's outcomes (Vassallo, Smart, Sanson, Dussuyer, & McKendry, 2003). Children spend many hours at school and, for most young children, this is a happy experience. Figure 5 shows that, while children were not all very enthusiastic about going to school, once they were there, the majority enjoyed it. 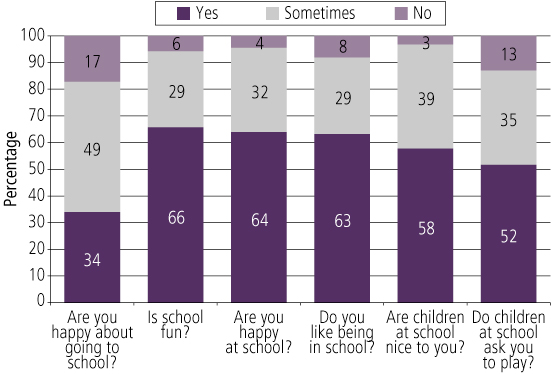 A minority of children reported less positive experiences of school and friendships at school. It is important that these experiences are detected and those children helped to cope.

Raising happy, healthy children is a collective responsibility for the common good. Most children do well. Some show the impacts of adversity, and for too many these mark their lives. Supporting families in the key roles they play is essential in ensuring that children have both a good start in life and continued opportunities to develop into happy and healthy adults. Understanding how they spend their time, the quality of their relationships and the impacts these have on their happiness and health is important if we are to address the problems that too frequently emerge in childhood and adolescence. Longitudinal data, such as those on which this Facts Sheet is based, provide a vital resource to those who frame policy and implement the kinds of practical family supports that are increasingly the focus of forward-thinking social policy.

This Facts Sheet was prepared by Jennifer Baxter, Matthew Gray and Alan Hayes. LSAC is managed by AIFS, in partnership with FaHCSIA and the Australian Bureau of Statistics. For more information about LSAC, see Gray and Smart (2009).

Children are spending considerably less time with their fathers than their mothers, according to research released today by the Australian Institut

Describes a new study that aims to fill gaps in the research literature concerning the influence of home-child care discontinuities on children.

Families make all the difference

Prepared for the 2012 National Families Week, with this year's theme being "Families make all the difference: Helping kids to grow and learn"