This research summary highlights some key findings from a range of studies dealing with: the experiences of separated families; children's needs in the context of the family law system; and the impact of domestic and family violence on parenting.

Among school-aged children, the majority of parents (86-93%) rated their child as doing the same as, or better than, peers in terms of school work, getting on with others and most other areas of their life.

Parents were asked about difficult child behaviours experienced in the three months before the survey. The results showed that:

Exposure to family violence and wellbeing

Exposure to or witnessing family violence had an effect on parents' reports of child wellbeing.

Kaspiew et al. (2015) found that parents who reported experiencing physical violence or emotional abuse before and/or during separation (63%) or since separation (58%) were more likely to report:

Overall, the majority of parents (71%) in the 2014 Survey of Recently Separated Parents (Kaspiew et al., 2015) who reported that their child had witnessed family violence felt that the experience had affected their child in some way.

Figure 2: Whether witnessing family violence affected the child, by percentage 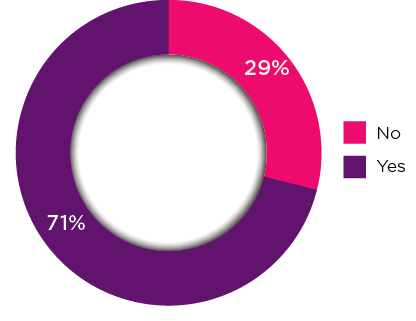 Some parents were asked to describe the effects on their child. The more commonly reported effects on children are shown in Figure 3.

Similar findings were made in the Domestic and Family Violence and Parenting project (Kaspiew et al., 2017, p. 108). That study highlighted the ongoing physical and emotional consequences of children being exposed to domestic and family violence, including high levels of stress and anxiety, and impaired social, emotional and educational functioning.

Similar findings arise from the Longitudinal Study of Separated Families, a national study of some 10,000 parents (Kaspiew et al. 2009; Qu & Weston, 2010; Qu et al., 2014), with this research providing insight into the longer-term effects of separation on child wellbeing.

Parents were asked about their children at different periods after separation, 15 months (Wave 1) and five years (Wave 3). Parents generally provided favourable reports of their child's health, learning, peer relationships and general development. Overall, more than half of the parents indicated that their child's progress in most areas of their life was better than other children of the same age or had improved over time.

Figure 4 shows the change in overall wellbeing reported by parents for children over 4 years old, between Waves 1 and 3.

Figure 4: Change in overall wellbeing between Waves 1 and 3 (children aged 4+ in Wave 1) 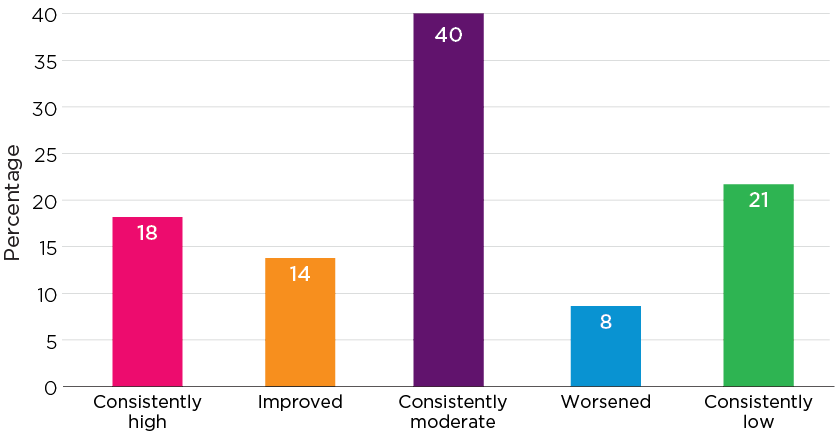 Where assessments had changed between Waves 1 and 3, the change was more likely to suggest that wellbeing improved rather than worsened.

Overall, these findings provide a positive picture of how most children are faring after separation. Children who live in families affected by violence/abuse, safety concerns or negative interparental relationships are more likely to be experiencing compromised development and wellbeing, particularly when those conditions are sustained over time.

What do children and young people want after separation?

In 2010, Lodge and Alexander highlighted the importance to adolescent wellbeing of parents being sensitive and responsive to their children's needs, including involving them in decision making and minimising parental conflict. In 2018, AIFS spoke with 61 children aged 10-17 years whose parents had separated (Carson, Dunstan, Dunstan, & Roopani, 2018). Consistent with Lodge and Alexander's findings, these children and young people wanted: 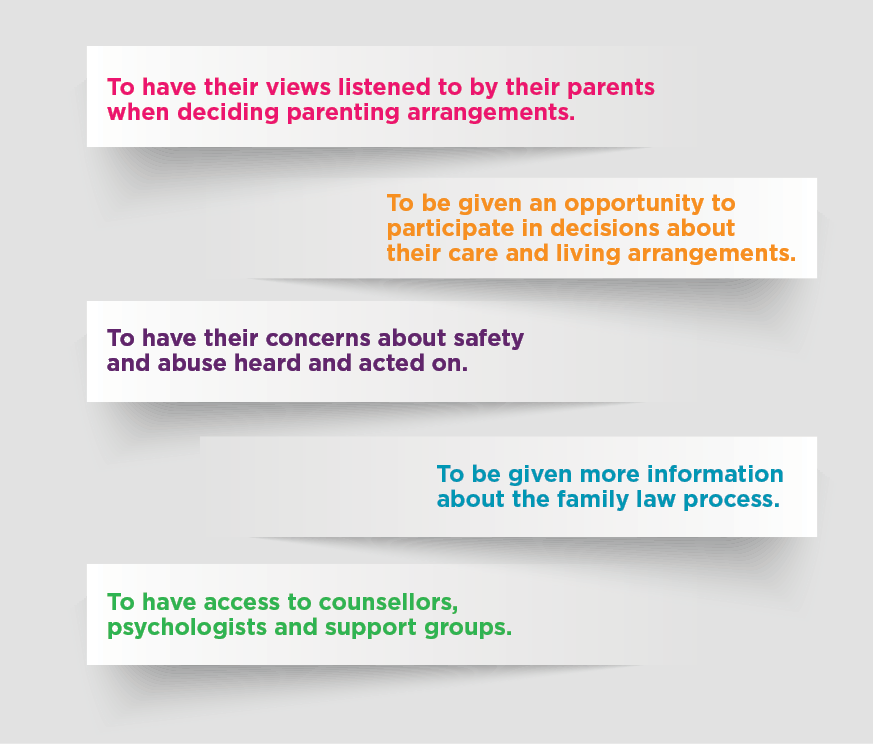 If you or your family are affected by family law issues or domestic and family violence:

AIFS is unable to provide advice or to assist with specific concerns in relation to individual family law matters. There is a range of information and advice available at the Family Relationships website.

You can also contact the Family Relationships Advice Line on 1800 050 321 for information and referrals. If you have a lawyer, you may also wish to discuss your family law matter with them.

Call 000 at any time if you are worried about your safety, or the safety of another person or a child.

For children: A great place to start if you want to talk about any issue in your life, is the Kids Helpline. Freecall on 1800 551 800.

If you have questions about the law, help is available at Lawstuff.

If you have questions about your health, help is available at Reachout and Youth Beyond Blue.

If you need some extra support or advice about issues in your life, Lifeline provides general and crisis telephone counselling. Call 13 11 14.

This Research Report investigates the experiences and needs of young people whose parents have separated and have accessed the family law system.

Evaluation of the 2006 family law reforms

The evaluation assessed the extent to which, by 2009, the changes to the family law system had been effective in achieving the policy aims