Many humanitarian migrants have experienced torture and trauma prior to arrival in Australia and these experiences can have serious long-term mental health impacts (Settlement Council of Australia, 2014).

This Research Summary explores Building a New Life in Australia (BNLA) participants' risk of psychological distress - shortly after arrival in Australia (3-6 months, Wave 1 of the study), and at annual interviews after that (at Wave 2 and Wave 3).1  Differences in risk of psychological distress between men and women and by age group are also explored.

Psychological distress was assessed in the study using the Kessler Psychological Distress Scale, which screens for general mental health in an adult population.2  This measure provides information on the likely presence of mental health problems. How these results changed over the first three years of settlement (over three waves of data collection) for the whole cohort are also reported.

1 Weighted data are used in analyses. Analysis was based on 1,704 respondents who completed a Wave 1, Wave 2 and Wave 3 interview.

Humanitarian migrants fare poorly on a range of health outcomes when compared to the general population in their resettlement country, including having poorer physical health and heightened levels of psychological distress (Davidson & Carr, 2010). This section investigates levels of psychological distress among BNLA participants, whether these change over time (across waves), and differences between men and women.

Levels of psychological distress at each wave were measured using the Kessler 6 Psychological Distress Scale. This scale includes six questions about anxiety and depressive symptoms experienced during the previous four weeks and screens for general mental health in an adult population (Kessler et al., 2003). Based on participants' responses to each item, they were classified into one of the following three groups: low, moderate or high risk of psychological distress.3 This information was collected from all participants aged 15 years and older.

Differences by age and gender

Previous research suggests a link between prior experience of trauma and humanitarian migrants' mental health (Davidson & Carr, 2010). The relationship between experiences of trauma prior to arrival in Australia and risk of psychological distress is investigated next. Jenkinson and colleagues (2016) reported that almost all BNLA respondents reported that they, or their families, had experienced one or more traumatic events prior to migrating to Australia. The relationship between number of traumatic events experienced before arrival and risk of psychological distress at each wave is described in Figure 2.6

Note: Analysis is restricted to participants who completed Wave 1, Wave 2 and Wave 3 surveys. 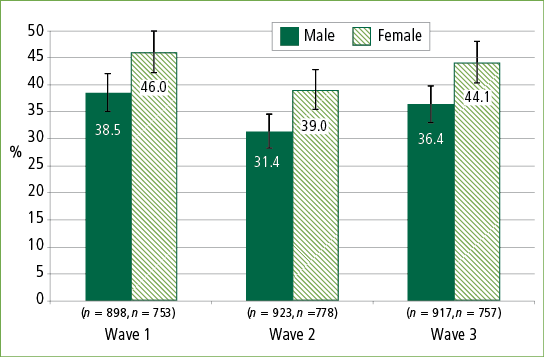 Figure 2: Proportion reporting moderate/high psychological distress at each wave, by the number of traumatic events experienced prior to arrival. 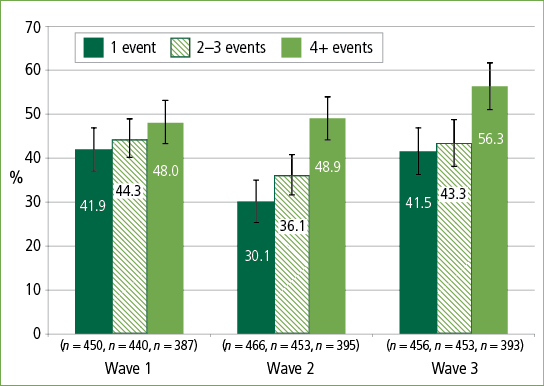 Psychological distress and experiences of discrimination

4 Correspondingly, there was also a significant difference in the proportion of men reporting psychological distress in none of the first three waves (38%) compared to women (30%).

Back to the top of section
Summary

This Research Summary provides an overview of the risk of psychological distress of BNLA participants based on analysis of participants' responses to the Kessler 6 Psychological distress scale - a six question scale that screens for general mental health in an adult population. The analyses reported here use the first three waves of the BNLA data.

The analyses reported here are based on Waves 1-3. The first three waves of BNLA data are now available to approved researchers from government, academic institutions and non-profit organisations. Details on how to apply for the BNLA data are available on the Department of Social Services website.

Back to the top of section
References

Back to the top of section

The Australian Institute of Family Studies (AIFS) was commissioned to manage the design, administration and fieldwork of the BNLA project. AIFS contracted Colmar Brunton Social Research, in conjunction with Multicultural Marketing and Management, to undertake the fieldwork for the project.

We extend special thanks to the humanitarian migrants who participated in this study, especially for their wonderful support and generosity of time. We look forward to continuing to talk with them about their settlement journey in Australia.

A discussion about the factors affecting the settlement success for recently arrived humanitarian migrants.

This research summary reports on how young people aged 15-25 years old from humanitarian backgrounds are settling in Australia.

This article describes the cohort profile of the Building a New Life in Australia (BNLA) study.