Many changes have occurred in Australia since the establishment of the Australian Institute of Family Studies in 1980. This snapshot outlines some of the significant changes in household incomes, household wealth and also the amount of household debt over the last forty years. 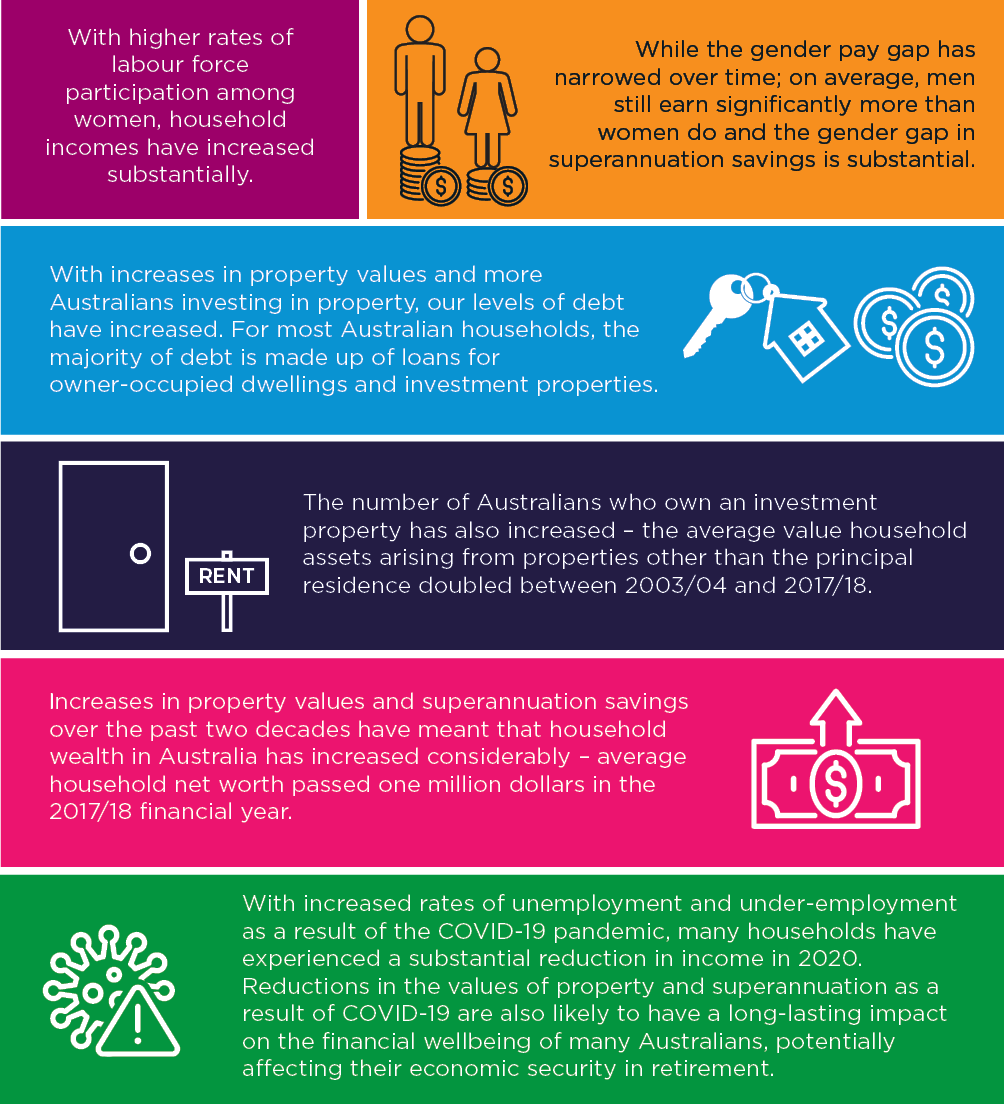 The trends in income and wealth

With increases in overall rates of female labour force participation and more women working full-time, average household incomes have increased substantially over the past few decades. Household wealth has also increased, with the average net worth of Australian households passing one million dollars in the 2017/18 financial year.

Gender pay gap narrows - but not by much

Women, on average, earn considerably less than men. Even among those who work full-time, there is a significant difference in earnings. Several factors contribute to this difference, including gender discrimination, occupational segregation, part-time work and time out of the labour force due to caring responsibilities. 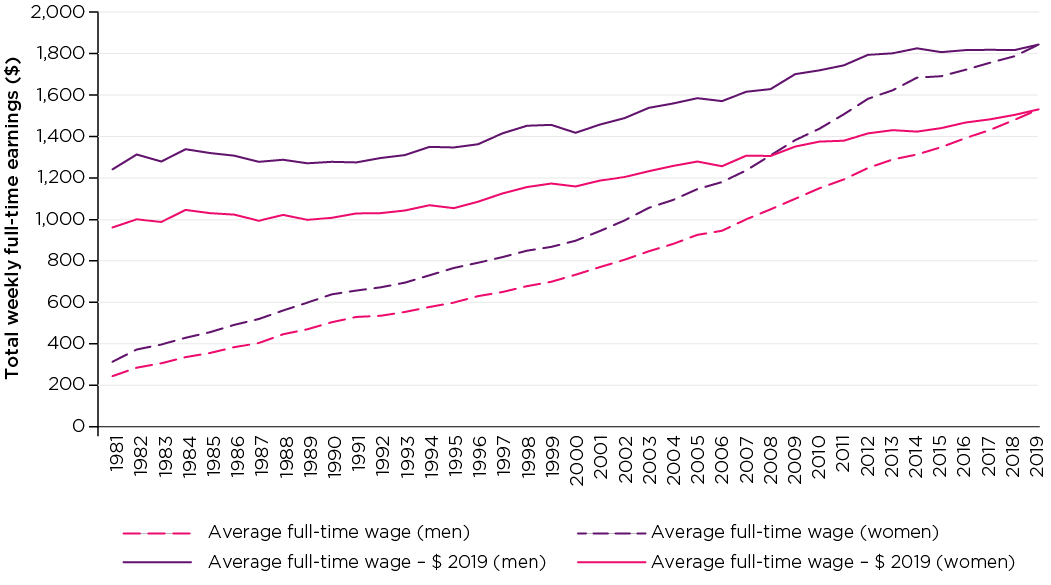 Even with the gender pay gap and many women working part-time, household incomes have, on average, increased considerably over the last two decades. In the 2017/18 financial year, the average weekly household income, before tax, was $2,242, up from $1,361 in 1995/96 (Figure 2). 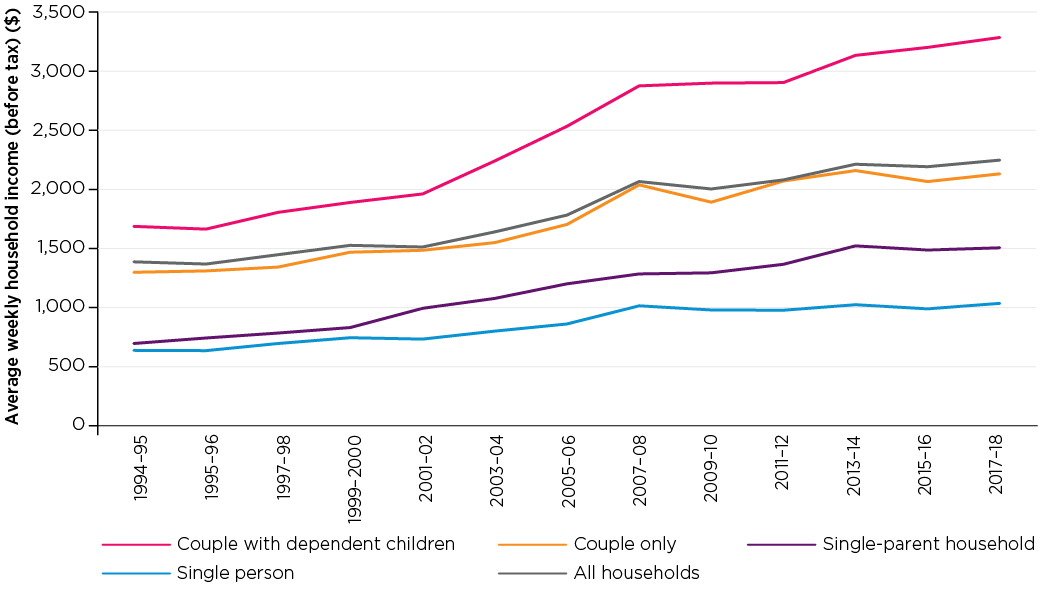 With increased rates of unemployment and underemployment as a result of the COVID-19 pandemic, many households have experienced a substantial reduction in income in 2020. Between mid-March to mid-April 2020, 31% of Australians reported that their household finances had worsened due to COVID-19 (ABS, 2020b). The coronavirus supplement for JobSeeker recipients and the introduction of the JobKeeper Allowance have provided a temporary financial buffer for families who have experienced a reduction in income; softening the full impact of COVID-19 on household incomes in 2020.

Increases in property values and superannuation savings over the past two decades have meant that household wealth in Australia has increased considerably. Average household net worth has increased from $657,000 in 2003/04 (in 2017/18 dollars) to over one million dollars in 2017/18 (Figure 3).

For most Australian households, property and superannuation are the largest components of household wealth. In 2017/18, the average value of an owner-occupied property was just over $500,000, compared to $350,000 in 2003/04. The number of Australians who owned a rental property has also increased, from 1.4 million in 2003/04 to 2.2 million in 2016/17 (Australian Taxation Office (ATO), 2019). This increase is reflected in the household wealth figures, with the average value of household wealth held as properties other than the principal residence more than doubling between 2003/04 and 2017/18. With the introduction of compulsory employer superannuation contributions in 1992, household-level superannuation savings have also increased, from $100,000 in 1994/95 (adjusted for inflation to 2017/18 dollars) to $180,000 in 2017/18. 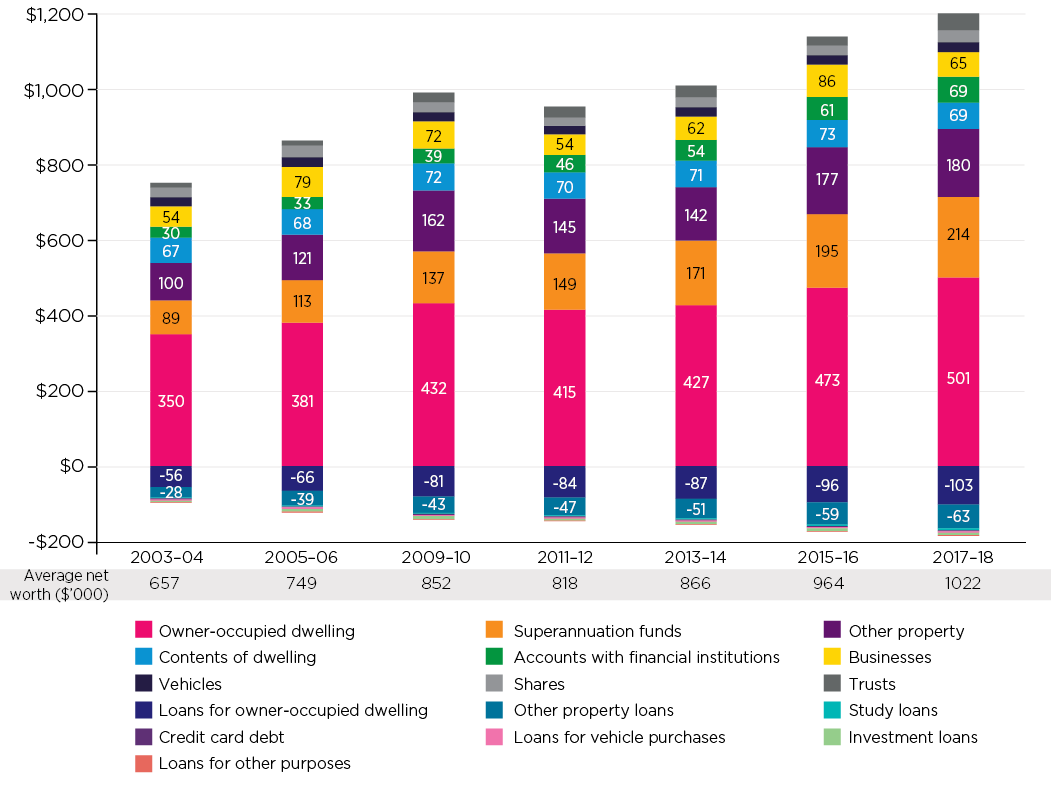 While the value of our assets has increased, our debts have increased too. For most Australian households, the majority of debt is made up of loans for owner-occupied dwellings and investment properties. On average, credit card debt and loans for purposes other than purchasing property make up only a small component of overall household debt. While the average amount of household debt for study loans increased from (the 2017/18 equivalent of) $1,700 in 2003/04 to $5,000 in 2017/18, average household-level credit card debt increased only slightly - from $2,600 in 2003/04 to $3,000 in 2017/18.

There is a considerable amount of uncertainty around household finances as a result of the COVID-19 pandemic. Many Australians have experienced a drop in the value of their superannuation savings as a result of the economic downturn from COVID-19; and some experts are predicting a fall in property values when JobKeeper Allowance, and the six-month deferral of home loan repayments, has ended. Furthermore, over one million Australians have drawn down on their superannuation savings, as part of the temporary early release of superannuation scheme (ASFA, 2020), which is likely to have a long-term impact on retirement savings and living standards in retirement, particularly for younger people.

Men still have more super than women do

In the 1970s, superannuation was still concentrated among a minority of employees - generally higher paid white-collar staff in large corporations, employees in the finance sector, public servants and members of the Defence Force. It was not until the introduction of the Superannuation Guarantee in 1992 that superannuation became a major component of Australia's retirement system. 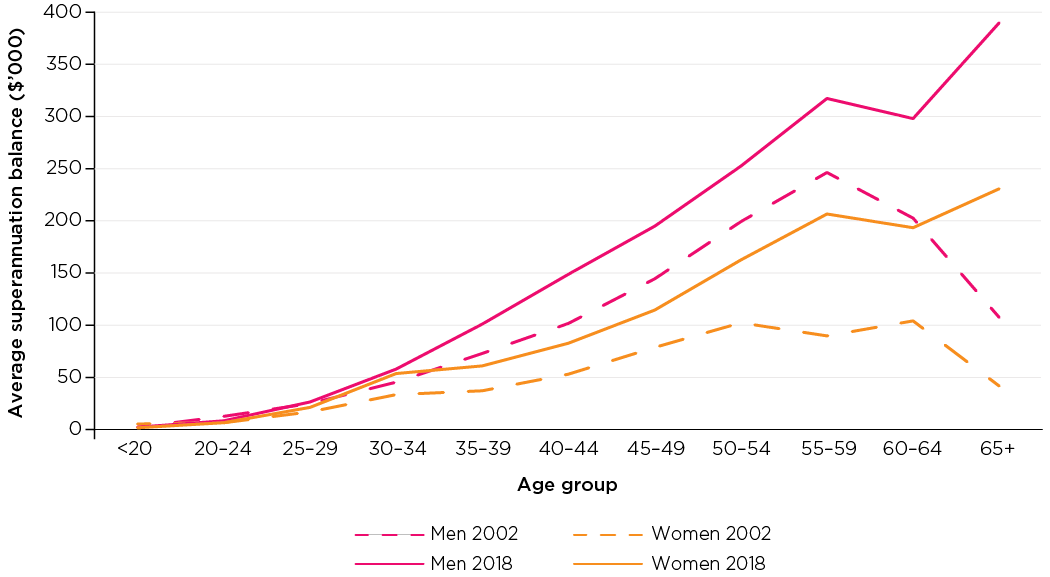 Note: 2002 values adjusted for inflation (reported in $ 2018).
Source: Household, Income and Labour Dynamics in Australia (HILDA) Survey, Waves 2 and 18. Sample restricted to people who are not retired and excludes those who have never been employed.
Credit: Australian Institute of Family Studies 2020

Before the introduction of compulsory superannuation, women were more likely to be in jobs where their employer did not contribute to a superannuation fund on their behalf. Even with the introduction of compulsory superannuation, women tend to receive lower employer contributions because they are usually based on a percentage of total salary and, on average, women earn less than men. Women are more likely to work part-time and to experience periods of career interruption because of caring responsibilities. These broken work patterns mean that women are often not in the work force for long enough periods to accumulate sufficient superannuation savings. Even when women re-enter the workforce later in life, their superannuation savings accumulate at a slower rate than those who have had an unbroken career path, as they miss out on the benefits of the long-term compounding effect of returns on superannuation savings.

As long as compulsory superannuation is based on income, the gender gap in superannuation savings will continue to exist. However, this does not necessarily mean that women will suffer worse outcomes in retirement. Most Australians approaching retirement are living with a spouse or partner, and for people in couple households the overall level of savings of the couple, in combination with a full or part pension, are generally enough to maintain a reasonable standard of living in retirement (Warren, 2015). In fact, recent research has shown that retirees today feel more comfortable financially than younger Australians who are still working (Daley et al., 2018).

However, financial difficulties can often arise when a relationship ends or when a partner dies. Single-person households, particularly those of single women, have the lowest capacity for self-funding in retirement and are most likely to rely almost entirely on the age pension as their main source of retirement income (Warren, 2015). While the majority of retirees own their home outright, the percentage of retirees who are renting or paying off a mortgage is considerably higher among single women, and it is likely that housing stress will become more of a problem for retirees in decades to come. Estimates by REST Industry Super (2011) indicate that by 2036 one in four retirees will be renters rather than homeowners. With more than one million Australians drawing down on their superannuation savings early to assist with the financial consequences of COVID-19, this is likely to be an even more important issue for single women in the years to come.

The sixth snapshot from our Families Then and Now series outlines changes in when, how and where we work from 1980 to today.

Families Then & Now: Households and families

This second snapshot from our Families Then and Now series outlines some of the changes in Australian households and families from 1980 to today.