This fact sheet highlights some of the key trends in same-sex couple families in Australia. While challenges still face same-sex families, it indicates there have been improvements in societal attitudes to same-sex relationships.

How many same-sex couple families are there in Australia?

Australian families are characterised by increasing diversity – including a rise in the number of same-sex couple families.

The Australian Bureau of Statistics (ABS; 2016) estimated that there were 48,000 same-sex couples in June 2015, accounting for 0.9% of all couple families. ABS noted that the apparent rise might partly reflect an increasing willingness for same-sex couples to disclose their relationship. It could also be the case that same-sex partners are now more prepared to form a couple household, rather than to maintain separate homes.

Same-sex partners were most commonly aged 35–44 years (representing around 30% of all such partnerships) and tended to be younger than opposite-sex partners.

An Australian Institute of Family Studies report (Dempsey, 2013) stated that approximately 11% of gay men and 33% of lesbians in same-sex relationships have children. Higgins (2002) noted that children in same-sex parented families may have been raised from birth by a co-parenting gay or lesbian couple, raised by a single parent, or conceived in the context of previous heterosexual relationships.

Overall, the evidence does not support the view that same-sex parented families are harmful to children, with a review of Australian and international research (Dempsey, 2013) concluding that children in same-sex parented families do as well emotionally, socially and educationally as those in opposite-sex parented families. Further support for this came from an Australian study by Crouch, Waters, McNair, Power, and Davis (2014), which involved a convenience sample of 500 children of same-sex attracted parents, and found that they did just as well on a range of measures of child health and wellbeing, compared to children in broader population samples.1

In some of the studies reviewed by Dempsey (2013), selected measures of wellbeing were more positive among children in same-sex parented families compared to other children. However, a key finding of the study by Crouch et al. (2014) was that parents with more perceived stigma related to their same-sex attraction (e.g., being the subject of gossip, social exclusion) provided a poorer assessment of their child’s outcomes in physical activity and emotional development, and poorer family cohesion compared with other same-sex attracted parents. That is, the experience of stigma related to having same-sex parents, which might include experiences of bullying or social exclusion, can be a risk factor for the wellbeing of children.2

Community views about same-sex couples appear to have changed significantly over the past decade. The Household, Income and Labour Dynamics in Australia (HILDA) Survey3 has collected data on the issues relating to equal rights of same-sex couples and opposite-sex couples in some survey waves. In 2005, 2008 and 2011, respondents age 15 years and over were asked to rate their level of agreement or disagreement with the statement “Homosexual couples should have the same rights as heterosexual couples do” on a scale ranging from (1) strongly disagree to (7) strongly agree.

Figure 1 shows the proportion of the respondents who indicated some level of agreement (i.e., ratings of 5–7) with the statement across the three years.

Figure 1: Percentage of respondents who indicated their agreement with equal rights of same-sex and opposite-sex couples in 2005, 2008 and 2011 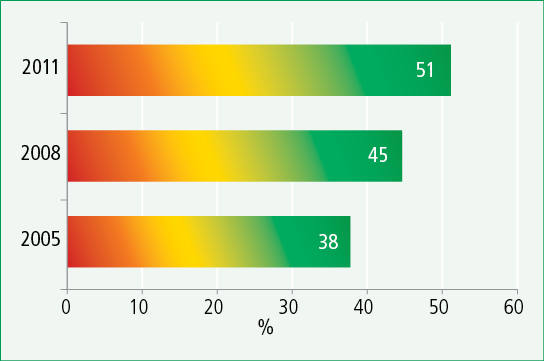 Note: Percentages based on weighted data. Agreements refer to the ratings of 5–7 on a scale from (1) strongly disagree to (7) strongly agree with the statement that homosexual couples should have the same rights as heterosexual couples.

Women were more likely to endorse equal rights for same-sex couples. In 2011, 58% of women agreed with the proposition, compared with 44% of men.

Figure 2: Percentage of respondents who indicated their agreement with equal rights of same-sex and opposite-sex couples by age group, 2011 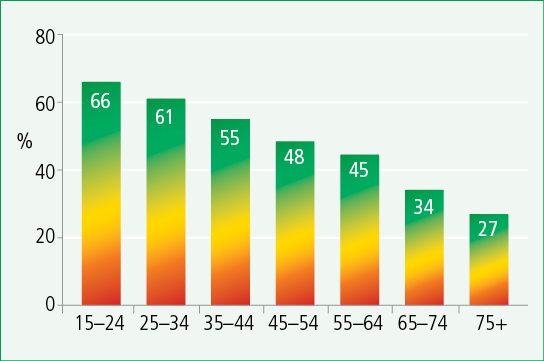 1 There are methodological challenges in answering questions about how children’s wellbeing compares for those in same-sex parented families. Challenges arise in particular because samples of children with same-sex parents tend to be very small, and are often biased. Making valid comparisons while also taking account of differences in family socio-economic status, parenting, and instability of family relationships can therefore be difficult. As a consequence, this continues to be considered a controversial area of research (see Dempsey, 2013).

2 The negative impacts of homophobia and prejudice, including the distress experienced by same-sex attracted people as a result of stigma and discrimination, and the mental health consequences of social exclusion, are discussed by the American Psychological Association <www.apa.org/about/gr/issues/lgbt/marriage-equality.pdf> and the Australian Psychological Society <www.psychology.org.au/Newsandupdates/22Dec2011/ >.

3 The HILDA project was initiated and is funded by the Australian Government Department of Social Services (DSS) and is managed by the Melbourne Institute of Applied Economic and Social Research. The findings and views based on these data are those of the authors and should not be attributed to either DSS or the Melbourne Institute.

This facts sheet examines the extent and nature of change in household and family forms.

Diversity and change in Australian families

The book provides snapshot of the diversity of family types, the changes and transitions a family may experience, and issues affecting families