A new national study has found 16 per cent of Australian teenagers aged 16-17 years reported spending money on some form of gambling activity in the previous 12 months, with some gambling illegally because they were underage.

The Growing Up In Australia Longitudinal Study of Australian Children found the most common gambling activity for 16-17 year olds was private betting with friends or family. However, some teenagers reported betting on sports and races which have strict age restrictions requiring people to be 18 years or over.

Australian Institute of Family Studies Director, Anne Hollonds said while most 16-17 year-olds did not gamble, a significant number – one in five boys and one in eight girls – reported spending money on at least one gambling activity in a 12-month period.

“The most common form of gambling for these teenagers was private betting with friends and family with no legal age restrictions, such as cards or maj-jong,” she said.

“Previous research has shown that heavy involvement in gambling during adolescence can lead to a variety of issues such as relationship problems and poor educational outcomes, and some of these young people might be at greater risk of gambling-related harm in the future.”

“The study found that teenagers were more likely to gamble if they or their friends engaged in risky behaviours such as drinking alcohol, smoking cigarettes or using cannabis.  On the other hand, they were less likely to gamble if their friends had a positive attitude towards academic achievement and were interested in doing well at school,” she said.

“Boys who had either been the victim or perpetrator of bullying at school were also more likely to take part in gambling activities. However, this association was not found to be significant for girls.”

“In addition, the percentage of girls who reported playing gambling-like video games was significantly higher if they had a parent who also played these types of games.  However, this was not the case for boys.”

Dr Jenkinson said simulated gambling embedded in some video games was also a risk factor which could increase the likelihood of teenagers gambling with real money and developing gambling problems in the future.

“Our study found that the number of 16-17 year-olds who had spent money on at least one gambling activity in the previous 12 months was significantly higher among those who had also played gambling-like games during that time,” she said.

“These results support the argument that playing gambling-like games may increase the likelihood of some teenagers transitioning to commercial gambling in the future.”

Dr Jenkinson said future policies and initiatives aimed at reducing gambling related harm to young people might consider limiting the availability and marketing of gambling activities, such as ensuring stricter enforcement of acceptable proof of age for online gambling apps and entry into gaming venues.

Access a copy of the AIFS’ Growing Up in Australia Longitudinal Study of Australian Children 2018 Annual Statistical Report Gambling activity among teenagers and their parents.

View media release as a PDF 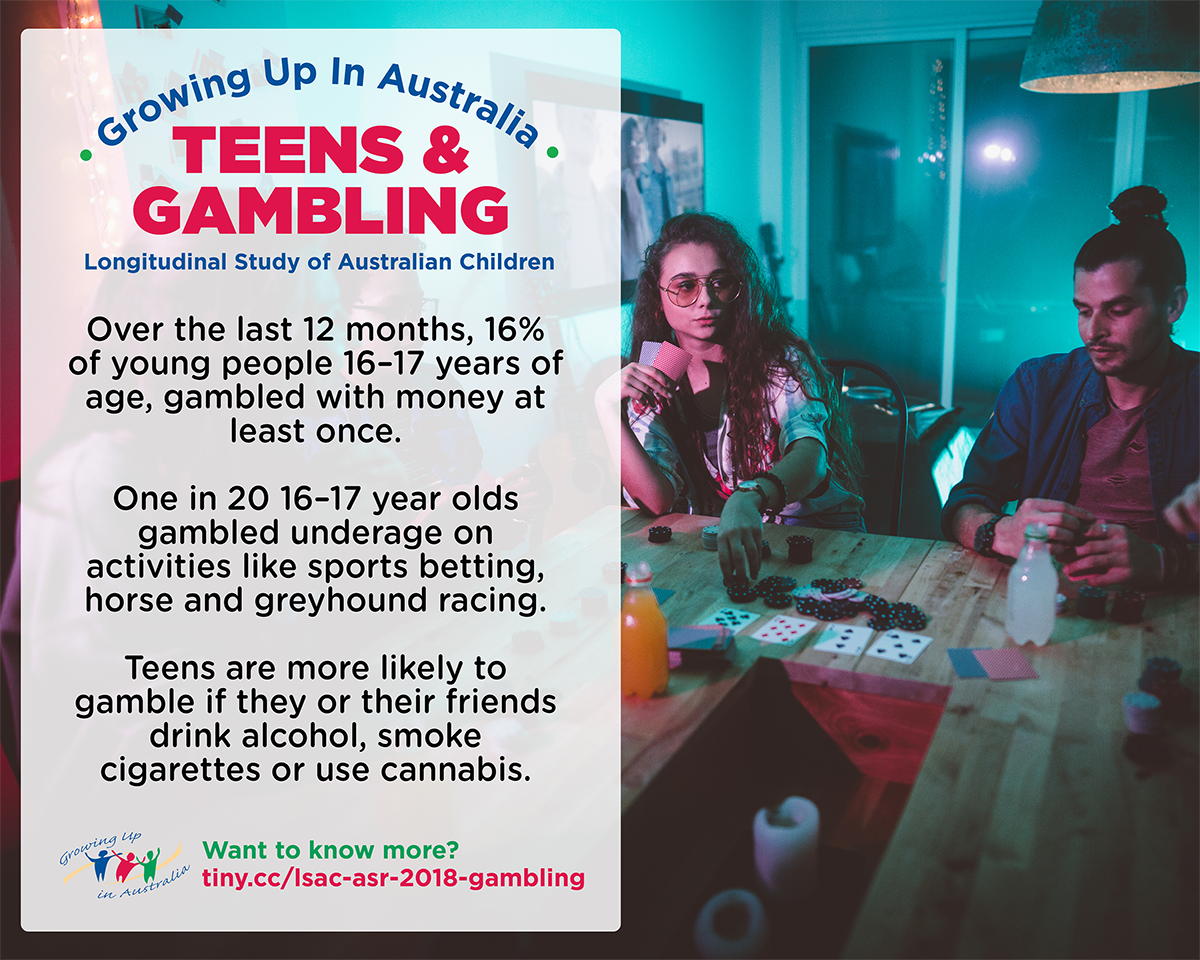