Family Matters - Issue 29 - In a Class of Our Own? | Australian Institute of Family Studies

In a Class of Our Own?

This article compares Australian family values with those of Great Britain and the United States, focusing on attitudes towards marriage, value of children, and women's employment.

Are Australian family values different from those of other English-speaking countries? A picture of contemporary Australian family values is presented elsewhere in this issue. That picture was based upon National Social Science Survey (NSSS) data, collected by researchers at the Australian National University. Briefly, Australians still place high value on marriage and the raising of children. They are cautious about the ease with which divorce should be available. They also think it is better for the whole family if a mother of young children stays at home to take care of the children. Do Americans and Europeans agree with these sentiments? 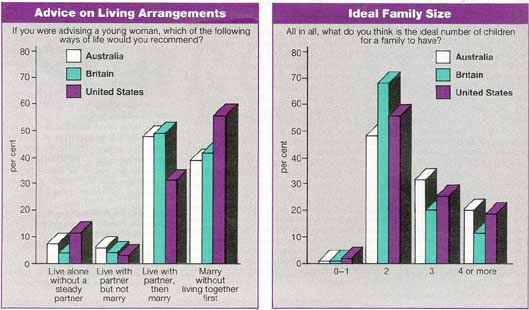 The British and Australians were similar in their response to a question asking whether freedom is more important than the companionship of marriage --- just over 10 per cent in both countries thought it was; slightly more (16 per cent) of the Americans thought so.

Australians were least likely (14 per cent) to agree that the main advantage of marriage is that it gives financial security. However, the results for the United States (16 per cent) and Britain (18 per cent) are not very different.

Of the three countries, Australians were most likely (23 per cent) to think that the main purpose of marriage is to have children. The British were close behind (21 per cent), while the Americans stood out as quite different with only 12 per cent agreeing.

Less than 2 per cent in all three countries agreed that it is better not to have children because they are a heavy financial burden. More than 85 per cent disagreed that children are more trouble than they are worth.

Few in the United States (11 per cent), Britain (10 per cent), and Australia (9 per cent) agreed that children infringe on an individual's freedom too much.

Australians were most likely to agree (30 per cent) that those who never have children lead empty lives. Americans were least likely to do so (18 per cent), and the British were placed in the middle (24 per cent).

Is a marriage without children fully complete? Half of the Australians thought so while somewhat fewer Americans and British (both 46 per cent) did.

In all three countries, the vast majority (as least 78 per cent) concurred that watching children grow up is life's greatest joy. 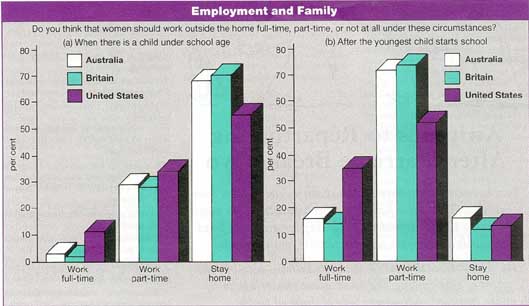 The majority of respondents in all three countries agreed that an employed mother can have just as warm a relationship with her children as a non- employed mother. In the United States two-thirds agreed, while 57 and 59 per cent respectively agreed in Australia and Britain.

Americans were least likely (43 per cent) and Australians most likely (53 per cent) to think that a pre-schooler was likely to suffer from the mother's employment; 48 per cent of British respondents thought that this was the case.

Australians were most likely (50 per cent) to think that the family suffers when the mother takes a full-time job. Next came the British (42 per cent) and then the Americans (35 per cent).

'A job is all right, but what most women really want is a home and children.' This was a minority perception in Britain (33 per cent), the United States (34 per cent) and Australia (40 per cent).

These statistics were gathered from a report written by Dr M.D.R. Evans, from the Australian National University, entitled Australian Family Values in International Perspective: An Exploratory Study of Data from the International Social Survey Program's 'Family Values 1989 Module'. A copy of this report is available for use in the Institute's Family Information Centre.