If you require assistance or if you would like to talk to a trained professional about the issues described in this research summary, please call Kids Helpline on 1800 55 1800 or the Family Relationship Advice Line on 1800 050 321.

There are two significant ways in which court orders and arrangements in the general separated population differ:

Over the past 10 years, the Australian Institute of Family Studies (AIFS) has conducted multiple large-scale studies of post-separation parenting outcomes, including surveys involving nationally representative samples of separated parents.

The evaluation of the 2012 amendments included an analysis of court outcomes (Kaspiew et al., 2015c) that involved 997 court files of matters initiated after the amendments and finalised by 30 November 2014.1 The evaluation also included a Survey of Separated Parents (Kaspiew et al., 2015a), which analysed survey data from a sample of about 6,000 separated parents who had been separated for 18 months on average.

The findings from these analyses are given below.

What are the most common parenting arrangements after separation?

AIFS' research shows that there is considerable variation in the ways that families arrange their children's care after separation (see Figure 1). Issues such as the children's age and the parents' working patterns play a significant role in decision making. 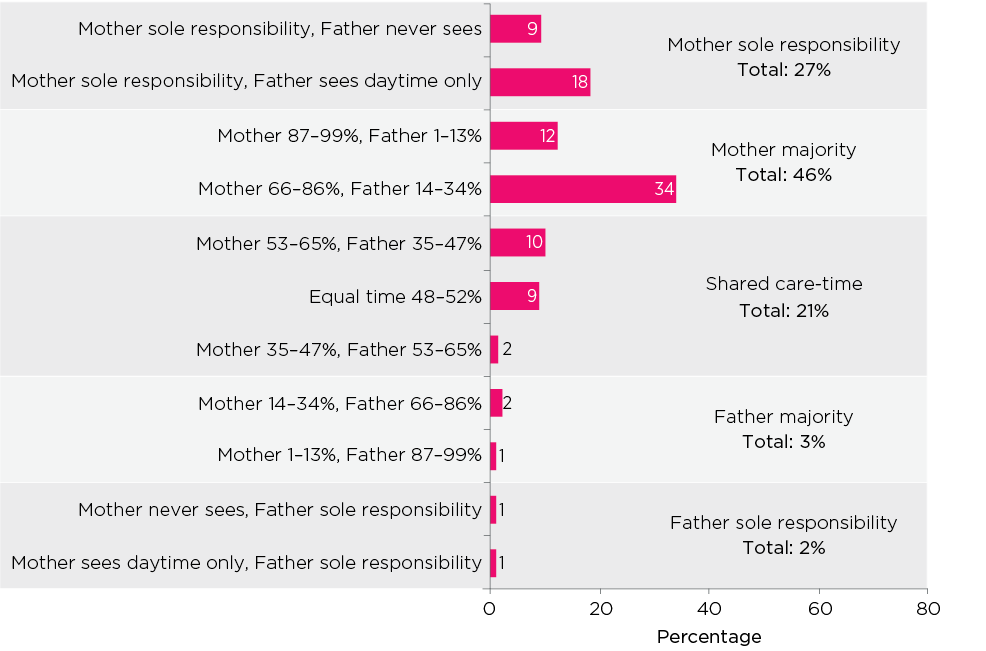 Notes: Survey of Separated Parents 2014. Data have been weighted. No. of observations: n = 5,305. In cases where both parents of a focus child participated (n = 523), data from one parent were randomly selected for inclusion. Percentages may not total 100.0% due to rounding.
Source: Kaspiew et al., 2015a
Credit: Australian Institute of Family Studies 2019 (aifs.gov.au/copyright)

The Survey of Separated Parents 2014 (Kaspiew et al., 2015a) found that the most common arrangement about 18 months after separation is for children to live with their mother most nights (at least 66% of nights in a year).

The next most common arrangement (18% of cases) is for children to spend all of their nights with their mother and see their father in the daytime only. Earlier research shows this is particularly common for children under two years of age (Kaspiew et al., 2009).

In 21% of cases, care time was substantially shared between parents (i.e. the child spending between 35% and 65% of nights in a year with the mother/father). Most shared-time arrangements involved more time with the mother. Arrangements for equal time occurred in less than 10% of cases.

It is fairly uncommon (9% of cases) for children to have no contact with their father.

What the law says

Under the Family Law Act 1975 (Cth), courts can make orders about two broad aspects of parenting: one is parental responsibility and the other is care time (Kaspiew et al., 2015b).

The court has to put the best interests of the child first when making these orders (s 60CA).

Courts need to consider a range of factors, including the child's right to a meaningful relationship with both parents and their need to be protected from harm from exposure to family violence and child abuse (s 60CC(2) and 2A). Other factors include the child's views and the nature of their relationship with each parent (s 60CC(3)).

The Act requires the court to apply a presumption of equal shared parental responsibility (s 61DA), unless a parent can show it should not be applied because of family violence or child safety concerns, or should be rebutted for other reasons.

Where orders for equal shared parental responsibility are made, the court also has to consider whether orders for the child to spend equal or 'substantial and significant' time with each parent are practical and in the child's best interests (s 65DAA).

Where orders for equal shared responsibility are not made by applying the presumption, the court decides what time arrangements are in a child's best interests; it might still consider equal or substantial and significant time.

Even where the presumption is not applied, courts can and often do make orders for shared parental responsibility, if they decide this in the child's best interests.

Where the evidence shows a child needs to be protected from harm from exposure to family violence or child abuse, the court needs to put this ahead of the child’s right to a meaningful relationship with both parents (s 60CC2A). In rare cases (3%), this might mean that a court makes an order for the child not to see a parent and in other cases (4%), it can try to make it safe for the child to keep seeing a parent by ordering supervised contact (Kaspiew et al., 2015c).

Is it common for parents to go to court for orders about parenting?

Most parents (97%) don't go to court: they make arrangements between themselves (Table 1).

Among the 3% of parents who went to court for parenting arrangements, most reported in the Survey of Separated Parents that they experienced family violence (physical violence 54%, emotional abuse 85%). Nearly 50% reported concerns for safety (their own, their children's or both; Kaspiew et al., 2015b).

Other problems reported by parents who used the courts included mental health issues (59%) and substance misuse (42%).

When parents do go to court, what are the outcomes?

There are three ways that court orders are made:

Most children (64%) subject to orders were living mainly with their mother and spending less than 35% of nights with their father. Orders for shared care time were made for 17% of children.

In the adjudicated sample, 19% of children were to live with their father and spend less than 35% of nights with their mother. It is notable that these sort of arrangements are far more likely to occur when there is a court intervention than when parents sort things out themselves.

Where parents had agreed without their matters actually being determined by the judge, but after litigation commenced, 75% of children had orders that the child live with their mother and spend less than 35% of nights with their father.

A further 15% of children had shared care-time arrangements and 10% had arrangements where they lived with their father and spent less than 35% of nights with their mother.

Is it common for a court to order that a child have no contact with one of their parents?

Where courts are concerned about child safety, they can make orders for contact to be supervised, either by a relative or friend or at a centre run by an organisation that provides this service. Supervised time arrangements applied to 4% of children (Kaspiew et al., 2015c).

The key goal of the research is to examine the extent to which the aims of the 2012 family violence amendments are being realised.