In March 1991 a census was undertaken of the 69,275 full time active duty members of the Australian Defence Force (ADF) by the Australian Institute of Family Studies. Because little was known about the families of serving members, the bulk of the questionnaire was designed to elicit information on family composition and service related family problems. This article presents an overview of some of the findings of the census relating to family composition; characteristics of serving members; partners and partnerships; children at home; and work and family issues.

On 12 March 1991, all 69,275 full-time active-duty members of the Royal Australian Navy, Army and Air Force were invited to participate in the first census ever taken of the Australian Defence Force (ADF). Much, of course, was already known of Service-related details of individual serving members. However, little was known of their families.

For this reason and reflecting the increasing awareness of the significance of workfamily relationships, the bulk of the census questionnaire was designed to elicit information on family composition and service-related family problems.

Recognising that the interrelationship of work and family obligations is a matter for continuing consideration, the Defence Force intends to conduct further such censuses; it is also likely that specific-purpose research projects will flow from these censuses, building on the data obtained from them.

Following consideration of open tenders in 1990, the Australian Institute of Family Studies was asked to provide its family research expertise in support of the census. In consultation with a Steering Committee, the Institute designed the census questionnaire, prepared and cleaned the data provided by 58,627 census participants, constructed a machine-readable database for further Defence Force research, and provided several reports of initial census findings.

One of these reports, The Australian Defence Force 1991 Families Census Public Report, was launched on 4 September at Parliament House in Canberra by the Minister for Defence Science and Personnel, the Hon. Gordon Bilney. It was designed primarily to provide feedback to census participants, and also to inform the wider Australian community which has an interest in the experiences of its Defence Force personnel. The overview presented here is taken from that report.

Over half (53 per cent) of the Defence Force's 69,275 serving members on 12 March 1991 were either married and living with their spouses or were in de facto relationships recognised for the purposes of Defence Force allowances and entitlements. A further 3 per cent were in de facto relationships not recognised by the ADF. Slightly more than 13 per cent of serving members' partners were also in the Defence Force. Fifty-five thousand children of serving members and/or their partners were living at home. A further 3000 children and other relatives were living with ADF members. 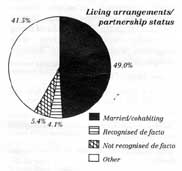 Slightly less than one in five were commissioned officers, over two-thirds were Petty Officers/Sergeants or more junior enlisted personnel, while just over one-tenth served in the three senior non-commissioned grades.

Approximately one serving member in eight is female.

Just under half of all ADF members are between the ages of 20 and 29 years.

Female members are younger than their male counterparts (58 per cent aged 24 or less, compared with 36 per cent of males) and are, accordingly, more junior in rank.

One-third of all serving members have completed some form of post-secondary education. A further 8 per cent are studying for a post-secondary qualification, the overwhelming majority (81 per cent) with Defence Force assistance.

Longer-term Service-related mobility may be seen in the fact that while only 42 per cent of service members have served ten years or more, fully a quarter have had between six and ten postings of four or more weeks' duration and one-fifth have had eleven or more. Similarly, a quarter have moved house between three and five times in the Service, while one in six have had six or more moves.

Reflecting the fact that almost one-third of serving members live in barracks or mess, typical travelling times between home and work are reasonably short. One-third report that they either live at their place of work or that commuting time is five minutes or less. Slightly more than a third report that it takes between six and twenty minutes to travel between home and work. The balance, taking more than twenty minutes, comprise less than a third of Defence Force members.

One-tenth of those who are married and living with their spouses have partners who also serve in the Defence Force, as do slightly less than a third of those in de facto relationships.

When asked why their partners were not working, only 7 per cent said this was because there was no need, compared with 22 per cent reporting that no jobs were available. One in eight said their partners did not work because employers wanted people who would be in the area for a longer time, and 5 per cent said the reason was that they would not be in the area long enough to make working worthwhile.

Only 13 per cent of married personnel have yet to experience at least one Service-related household removal since being married. One in five have moved six or more times.

One in eight married ADF members were separated because of work-related reasons on census day.

Four in ten children in Service families are less than six years old. One in seven are 15 years of age or older.

Examined under a sufficiently powerful microscope, every occupational grouping could claim uniqueness for itself. However, it does not require much magnification to see the distinctiveness of service in the Defence Force. While other occupational groupings (and the Police Forces spring most quickly to mind) share one or more of the following characteristics, it is arguable that even then, differences of degree constitute differences of kind.

It is inherent in the job description of active service duty that serving members may be subject to hostile, life- jeopardising circumstances and may be called upon to engage in hostile activity. (It is salient to note here that the census, conducted during the recent Gulf War, included ADF members serving in that war.)

Without minimising the obvious potential difficulties arising out of serving in such a potentially hazardous occupation, focus on the second and third of these aspects of ADF membership points to matters requiring consideration in workfamily terms.

This overview highlights several of these: the effects on family cohesion of extended separations of (sometimes) considerable duration; the dislocational effects of mobility on the possibilities of spousal employment; and the educational dislocation of members' children. In addition, the relative inability of serving members to guarantee the regularity of working hours (even when not away from home) reduces the opportunity for them to assume child care responsibilities while their partner works during the member's off-duty hours. In the end, the particular nexus between mobility, spousal employment, child care and educational disruption cannot be examined properly in the context of a census. Proper examination of Defence Force workfamily trade-offs would require (as, indeed, it would for any occupational grouping) fairly extensive special- purpose research.

Given the size of the Defence Force workforce, together with the reasonable assumption that it concentrates workfamily difficulties more intensely than most other occupational groups, the Defence Force must be commended for initiating the 1991 Families Census, for its intention to conduct more such studies, and for its anticipation of specific-purpose research projects to be carried out over time.