The impact of gambling problems on families

Gambling problems can have significant impacts on families and communities, yet this has received relatively little research attention. Although most available information is based on intimate partners and children, gambling problems can also affect extended family members such as parents, grandparents and siblings.

What are the impacts of gambling problems on families?

What are the impacts of gambling problems on families?

What are the effects on intimate relationships?

Figure 1: Typical course for the effect of gambling problems on intimate relationships 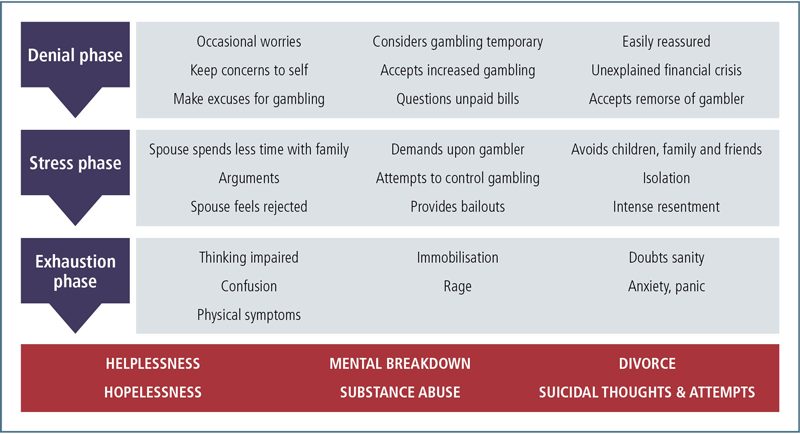 I've lost two relationships to it, lost three children, and lost the house to it ... a big impact. (Source: Dowling, Suomi, Jackson, & Lavis, 2014a)

What are the impacts on family environments?

The family environments of people with gambling problems are also characterised by high levels of anger and conflict as well as low levels of clear and effective communication, less independence, less engagement in intellectual and cultural activities, a lack of commitment and support, little direct expression of feelings, and less participation in social and recreational activities (Ciarrocchi & Hohmann, 1989; Ciarrocchi & Reinert, 1993; Dowling et al., 2009). These family environments are comparable to those of people with drinking problems (Ciarrocchi & Hohmann, 1989). Moreover, the children of people with gambling problems are exposed to a range of family stressors, including financial and emotional deprivation, physical isolation, inconsistent discipline, parental neglect/abuse and rejection, poor role modelling, family conflict, and reduced security and stability (Darbyshire, Oster, & Carrig, 2001). Kalischuk and colleagues summarised the most common problems reported by family members of people with gambling problems (see Box 1) (Kalischuk, Nowatzki, Cardwell, Klein, & Solowoniuk, 2006).

My children have gone without, there are unpaid debts, we never had the money to go away. (Source: Dowling, Suomi et al., 2014a)

It has changed the way I communicate with my two children, son 10 years old and daughter 16 years old. I'm less patient with them or I cut myself off from them after a gambling episode. Then, I isolate myself and lock myself in my bedroom. (Source: Dowling, Suomi et al., 2014a)

Is there a relationship between gambling problems and family violence?

The World Health Organization (2002) defines IPV as any behaviour within an intimate relationship that causes physical, psychological or sexual harm to those in that relationship. This can include acts of physical violence, sexual violence, emotional (psychological) abuse and controlling behaviours. According to a systematic review of the available research conducted internationally (Dowling et al., in press), over one-third of people with gambling problems report being the victims of physical IPV (38%) or the perpetrators of IPV (37%). Moreover, 11% of offenders of IPV report gambling problems.

Although most of the evidence relates to intimate relationships, there is some evidence that the victimisation and perpetration of violence extends to children and other members of the broader family (Dowling, Jackson, et al., 2014; Dowling et al., in press; Suomi et al., 2013). According to the systematic review, over half of people with gambling problems (56%) report perpetrating physical violence against their children (Dowling et al., in press). Moreover, several recent Australian studies have found that one-third to one-half (34-53%) of people with gambling problems and their family members report some form of family violence in the previous 12 months (victimisation (27-41%), perpetration (23-33%); Dowling, Jackson et al., 2014; Suomi et al., 2013). In these studies, parents, current partners and former partners were both the most common perpetrators and victims of the family violence. However, results from studies involving family members other than partners must be interpreted with caution. Only a few studies are available with large variability in reported prevalence estimates. In addition, many studies are not representative of the general population, include only small numbers of problem gamblers, use groups that may experience multiple problems in addition to gambling-related issues, and use different definitions of violence. Further research is required to provide information about the relationship between problem gambling and violence that extends into the family beyond intimate partners.

What are the effects on the health and wellbeing of family members?

Gambling problems adversely affect intimate partners and children in a number of ways (Dickson-Swift, James, & Kippen, 2005; Hodgins, Shead, et al., 2007; Vitaro, Wanner, Brendgen, & Tremblay, 2008). While emotional difficulties, physical complaints and behavioural difficulties are common, they can be experienced and expressed quite differently, as seen in Box 2.

It's stressed [my family], they are trying to help me financially … so I've put a lot of pressure on them. They are worried and concerned about my health and mental health, and what has caused my gambling. (Source: Dowling, Suomi et al., 2014a)

Are gambling problems transmitted from one generation to the next?

Box 3: Risk and protective factors for the intergenerational transmission of gambling problems

What are the impacts reported by family members attending gambling services? 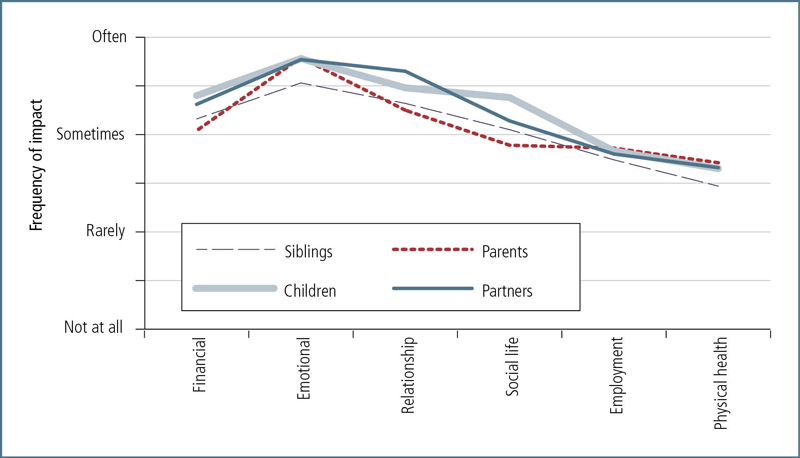 An indication of more specific family impacts is provided by a study exploring the family impacts of gambling problems from the perspective of gamblers accessing Australian face-to-face gambling counselling services (Dowling, Suomi et al., 2014a). The most common responses from family were a loss of trust in the gambler (63%), anger towards the gambler (61%), depression or sadness (59%), anxiety (58%), distress due to gambling-related absences (56%), reduced quality of time spent with the gambler (52%), and a breakdown in communication (52%).

My gambling financially ruined everything we had worked hard for. (Source: Dowling, Suomi et al., 2014a)

The lying and stealing has created trust issues for my family. (Source: Dowling, Suomi et al., 2014a)

Despite these findings, there remains a dearth of information about how gambling problems impact on the health and wellbeing of family members. Further research that explores how different family members are affected and the factors that influence adverse effects is clearly required. Moreover, because it is likely that problem gamblers under-report family impacts (Dowling, Suomi et al., 2014a), it will be important for research to involve family members as well.

How do family members cope with gambling problems?

How do family members cope with gambling problems?

Figure 3: The stress-strain-coping-support model as applied to alcohol and other drugs 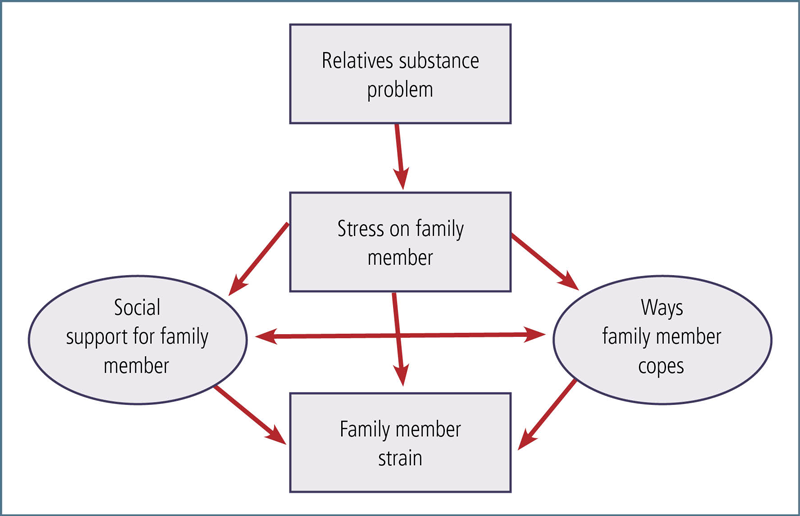 Coping is the central element in the stress-strain-coping-support model. Using this framework, several studies have found that family members most commonly employ "engaging" coping strategies. These strategies involve trying to change the excessive gambling by using emotional and controlling strategies, such as starting arguments about gambling, becoming moody, and making threats and ultimatums (Dowling, Suomi et al., 2014b; Krishnan & Orford, 2002). These findings are of concern given that this form of coping has not been very effective at protecting families when drug and alcohol problems are present (Orford et al., 2001). Research testing the degree to which social support and more adaptive forms of coping buffer the impact of having a problem gambling family member has yet to be conducted.

Other evidence of the coping strategies employed by families comes from a focus group of eight participants, conducted in Canada (Makarchuk, 2001). See Box 4 for examples of strategies that they found effective and ineffective in coping with problem gambling family members.

What are the assessment and therapy options for family members?

What are the assessment and therapy options for family members?

What are the assessment options for family members?

Assessment tools are important within both clinical and research settings, as they allow clinicians and researchers to identify the exact nature of the family member impacts, to evaluate the effectiveness of therapy for family member difficulties, and to illustrate discrepancies between gamblers and their family members. Two scales designed to measure family impacts in clinical and research settings across multiple domains have recently been developed in Australia: the Problem Gambling Significant Other Impact Scale (PG-SOIS) (Dowling, Rodda, et al., 2014) and the Problem Gambling Family Impact Measure (PG-FIM) (Dowling, Suomi et al., 2014a).1 The 6-item PG-SOIS is a brief tool that can be used to screen family members for impacts across broad domains of functioning: financial, emotional distress, interpersonal relationship with the gambler, social life, employment and physical health. In contrast, the 14-item PG-FIM provides an assessment of more specific impacts across fewer domains of functioning: financial, increased responsibility, and inter/intrapersonal functioning. There are gambler and family member versions of the PG-FIM. Orford et al. (2005) has also adapted the 16-item Family Member Impact (FMI) and the 30-item Coping Questionnaire (CQ) (Dowling, Suomi et al., 2014b) from the family members of people with alcohol and drug use issues to the family members of people with gambling problems.

What are the therapy options for family members?

Psychological therapies specifically designed for the family members of people with gambling problems have also been slow to evolve. It has been suggested that most family members engage in lower intensity interventions, such as self-help telephone or online support (Hing et al., 2013). For example, family members accessing a support service found this modality attractive due to its potential for anonymity, discretion and ease of access (Rodda, Lubman, Dowling, & McCann, 2013). To date, however, there is no information available about the effectiveness of online counselling for this clientele.

Therapies specifically designed to assist family members of problem gamblers include Community Reinforcement and Family Therapy (CRAFT: Hodgins, Toneatto, Makarchuk, Skinner, & Vincent, 2007) and Coping Skills Training (CST: Rychtarik & McGillicuddy, 2006). CRAFT, which has been delivered to family members using a self-help workbook, is a cognitive-behavioural therapy that aims to improve the personal and relationship functioning of family members, engage gamblers in treatment, and decrease their gambling. CST is a face-to-face treatment aimed at increasing coping skills and decreasing the distress of family members. These programs address many of the areas identified as being important in the functioning and coping of family members. Several couple-oriented treatments, such as integrative behavioural couple therapy (Ciarrocchi, 2002), congruence couple therapy (Lee, 2009) and adapted couples therapy (Bertrand, Dufour, Wright, & Lasnier, 2008) are also available. There is some evidence that involving family members in therapy can improve gambling outcomes (Ingle, Marotta, McMillan, & Wisdom, 2008). However, interventions will not work for all family members. Given the broad range of family impacts and high representation of family members among gambling support clients, there is a clear need to develop and evaluate the assessment and therapy options for this group of people.

Gambling problems can have a significant impact on families. Although most of the available research involves intimate partners, other family members such as children, parents, grandparents and siblings are also affected. Common family impacts include financial hardship, impaired family relationships, diminished emotional and physical health, family conflict, mistrust, family neglect, communication breakdown and confusion about family roles and responsibilities. There is also consistent evidence that gambling problems are associated with family violence and that they are transmitted from one generation to the next.

The lay coping strategies employed by family members - which most often involve trying to stop the problem gambling - are rarely successful, and fail to mitigate the development of associated emotional, physical and behavioural problems. Although family members often approach gambling counselling services, there are few assessment tools and therapy approaches specifically designed for them. There is a clear need for further research that explores impacts on family members and to identify effective coping strategies to manage a gambling problem in the family. There is also a need to develop and evaluate new therapy approaches that can be administered across self-help, face-to-face, telephone and online modalities.

The author would like to thank the Australian Research Council, which provided financial support for the Problem Gambling and Family Violence study, and Gambling Research Australia, which provided financial support for the Children at Risk of Developing Gambling Problems study. The author also wishes to acknowledge the valuable contributions to research on families by all of her co-authors, particularly Professor Alun Jackson (University of Melbourne), Dr Aino Suomi (Australian National University), Dr Tiffany Lavis (Flinders University), and Ms Simone Rodda (Deakin University).