Relationship Australia trialled its Elder Relationship Service in response to a significant problem arising from the ageing of Australia's population: conflict within families around ageing-related issues.

Family relationships in an ageing society

In recent decades, demographic, health and social changes have resulted in the ageing of the Australian population and an increase in the complexity of family structures (Australian Bureau of Statistics [ABS] 2008, 2012). These changes have the potential to increase ageing-related family relationship issues.

Ageing can contribute to poor family relationships in a number of ways. Older people with care requirements are predominantly looked after by their families. Longer life expectancies, coupled with extended ageing-related illness or disability, can significantly prolong the care phase. This, in turn, places significant mental, physical and financial burdens on older people, caregivers and extended family members (Millward, 1998; Silverstein & Giarrusso, 2010). It also places older people living in vulnerable situations at increased risk of violence and abuse.

Where there are health issues and family care is no longer appropriate or available, or end-of-life decisions need to be made, relationships may become increasingly strained, particularly for families with complex structures, poor communication skills or histories of relationship dysfunction. Family disputes can affect interpersonal relationships far into the future, permeating burial arrangements, estate devolution and family interactions. These disputes affect the wellbeing of individuals, families and communities, and lead to increased costs to welfare and service systems.

The need for a new service

The current suite of family and relationship counselling and family law services has been successful in improving family relationships for a broad range of Australian families over the past decade; however, there is still a service gap in the suite of alternative dispute resolution services for older people and their families (Braun, 2013; Ellison, Schetzer, Mullins, Perry, & Wong, 2004).

In response to this service gap, in 2016 Relationships Australia trialled a new service targeted at families with ageing-related relationship issues. The aims of the Elder Relationship Services Pilot Program were to:

The program provided a range of services and supports including counselling, capacity building, support, information, education and supported referral to police or other specialist legal services. Where appropriate, it supported family meetings, often co-facilitated by a counsellor and mediator.

The program serviced 140 clients (Table 1). The age of clients ranged from 34 to 92 years. Just under two-thirds (65%) of clients were women (Figure 1). Half of the clients (48%) were older people, followed by adult daughters (30%) and adult sons (18%) (Table 2). Family meetings commonly involved one or more adult sibling and one or more parent.

In 50% of cases, the presenting issue related to the future care or housing arrangements of a parent or parents. Where the care arrangement of parents was an issue, this was often compounded by family conflict, family violence, estrangement, and grief and loss. 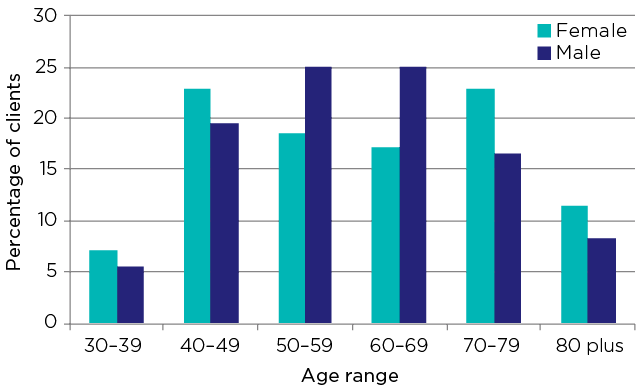 The family had a history of abuse. The father had assaulted the mother and had spent [time] in prison. Apart from the strain the abuse had put on the parental relationship, the relationships within the family, that is the siblings and their families, had been impacted by these events.

Throughout our client had kept in touch with each parent, supporting each with what s/he needed at the time, liaising with her siblings and keeping them informed with a view to allowing open communication channels. The client came to the service to:

In situations where there was identified elder abuse risk, at the root of the family's issues were often disrespectful behaviour and poor communication. In these situations, practitioners strove to resolve acute points of conflict and assist family members to have difficult conversations:

The service was contacted by an 81-year-old mother who was the carer for her physically disabled husband in a large home they share with their daughter, son-in-law and their three young children. The property was bought in the name of all four people some five years ago. The mother has some physical health issues of her own. She had been referred by a social worker who had been investigating possible alternative accommodation for them because the son-in-law had been saying that the home would have to be sold by the end of the year.

Individual intake and assessment was conducted with the parents together at an office not far from their home, and subsequently I saw their daughter and son-in-law. Both parents said that the mother was the target of verbal and emotional abuse by the son-in-law but there was no physical abuse or threatening behaviour. The mother said her daughter seemed to be heavily influenced by her husband's views but the relationship between mother and daughter was better when the daughter was on her own. Despite the stressful atmosphere in the house, the parents were still keen to discuss continuing to live under the one roof 'but with respect'. Seeing the grandchildren was obviously important to them.

At intake, the daughter and son-in-law seemed frustrated about a situation they say they had tried to improve but couldn't. They said they didn't know what would make the parents happy and had made many suggestions, including suggestions for respite care for the mother, but nothing was taken up. Communication was clearly a big issue. They were financially under great stress and the mortgage was blowing out in an unsustainable way.

The parties came together for mediation. Some agreements were made about finding a boarder, whose financial contribution could help with the mortgage, which the parents acknowledged was very urgent and important. There was also the opportunity for the mother to talk about how she felt about the abuse. The son-in-law listened and did not react defensively, which was helpful. Discussion also occurred about respite for the mother and the mother, in turn, talked about how much she loved them and the grandchildren. This was a productive session, and the discussion was respectful.

In our evaluation of the service, we found improvements in clients' knowledge and awareness of services, and in their communication, safety, behaviour and mental wellbeing.

The program was most effective if all relevant family members could be engaged and the older person was present. It was less effective if the service was unable to engage a family member who was significant to the family issue, there was long-standing entrenched family conflict, or if family members had already initiated a legal process (e.g. an application to an administrative appeals tribunal).

Overall, we found that the service was a natural fit with Relationships Australia's current business, workforce and service models. We also concluded that it was unlikely that the costs of service provision could be offset by client fees, especially if outreach was included, and that additional funding would be needed if the service was to continue beyond the short to medium term, or expand to additional locations.