Results from Young Minds Matter, the second national survey of mental health and wellbeing of Australian children and adolescents conducted in 2013-141, showed that adolescents with mental disorders were significantly more likely to have engaged in problematic and risky behaviours (e.g. tobacco use, binge drinking, using cannabis, and risky sexual activity) than all 13-17 year-olds. This short article describes some of these findings in further detail.

Young Minds Matter collected information from both parents and young people. Parents undertook structured interviews to determine if their children had mental disorders (including anxiety disorders, ADHD or conduct disorder). Young people completed a structured interview about Major Depressive Disorder (MDD), and answered questions about drug use and sexual behaviours.

Highest rates of smoking, alcohol consumption and cannabis use among those with MDD

Compared to 7% of all 13-17 year-olds, about one quarter of adolescents with MDD and 17% with other mental disorders had smoked cigarettes in the past 30 days.

The rate of binge drinking in the previous month for those with MDD was more than twice that for all 13-17 year-olds (28% compared with 12%).

Cannabis and other drugs

Between 4-6% of adolescents with MDD or any other mental disorder had used other drugs (e.g., prescription drugs for non-medical purposes, or ecstasy, amphetamines, or cocaine) in the last 30 days compared to 1% of 13-17 year-olds with no mental disorder.

Figure 1: Thirty-day prevalence of risk behaviours by 13-17 year-olds with Major Depressive Disorder (based on self-report) and for all 13-17 year-olds.

Depression among 13-17 year-olds who smoke and use drugs

With the exception of cigarette smoking among males, the proportion of adolescents with MDD was significantly higher amongst those who smoked cigarettes, consumed alcohol or used cannabis in the past 30 days compared to those who did not report doing so. The rates were particularly high among females. Nearly half of 13-17 year-olds females who had consumed alcohol in the past 30 days had MDD, along with 45% of those who had used cannabis and 31% of those who had smoked cigarettes.

Figure 2: Proportion of 13-17 year-olds with MDD (based on self-report) by 30-day risk behaviours. 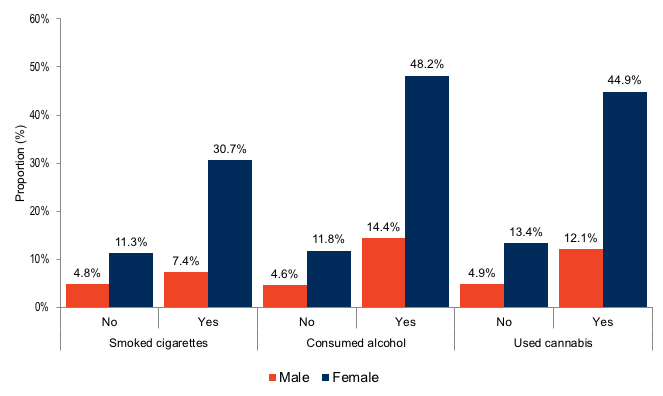 These findings confirm an association between mental health problems and risky behaviours in 13-17 year-olds and provide strong evidence based on nationally representative data, including self-report. In particular, these data show such behaviours as most prevalent among young people with major depressive disorder.

A range of strategies have been developed to address health risk behaviours in adolescents, including interventions to reduce access to cigarettes, alcohol and other drugs (such as the alcopops tax), and public health campaigns designed to publicise the harms associated with risky behaviours, or to stigmatise these behaviours. Findings from Young Minds Matter suggest that there may be additional opportunities for reducing harms associated with risky behaviours with interventions that also focus on mental illness. The strong association between health risk behaviours and mental illness, particularly depression, suggests that mental health and wellbeing should be an issue of concern to those trying to reduce risky behaviours in children and adolescents.

The clinical implications are for the screening of risk-taking behaviours in adolescents identified with mental disorders in school, general health and specialist mental health settings. Due to the ubiquity of its use with adolescents, the online environment is also an important space to provide accurate information and support to young people with mental health problems about drug use, unsafe sexual behaviours and other risky behaviours.

If you require assistance or would like to talk to a trained professional about the issues described on this page, please call Kids Helpline on 1800 55 1800 or Lifeline on 13 11 14.

If you are a young person aged 12-25 and are worried about your mental health or issues with drug use, you can also use eheadspace. eheadspace is a confidential, free and secure space where young people 12-25 or their family can chat, email or speak on the phone with a qualified youth mental health professional.