Families Then & Now: How we worked | Australian Institute of Family Studies

Home » Publications » Families Then & Now: How we worked

Many changes have occurred in Australia since the establishment of the Australian Institute of Family Studies in 1980. This snapshot outlines some of the changes over the last four decades in when, how and where we work. 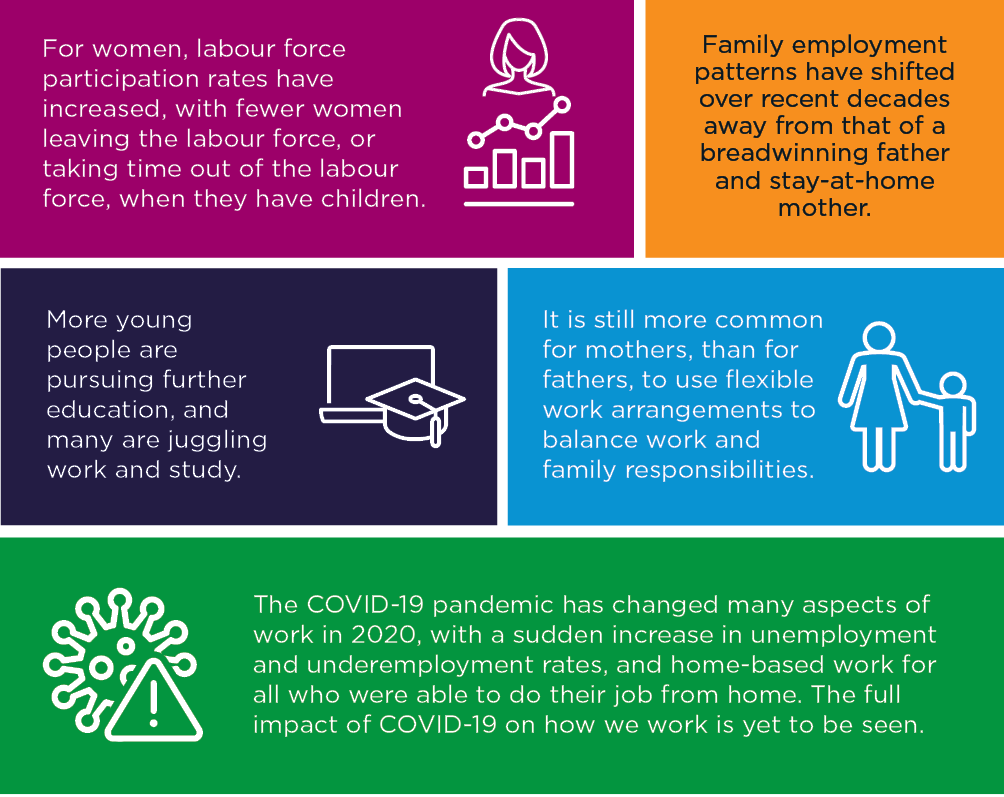 The trends in how we worked

Mothers staying in the workforce

Traditionally, most women stayed in the formal labour force until they got married, then never returned to a paid job. In fact, before 1966, married women could not work in the Commonwealth public service (Australian Bureau of Statistics [ABS], 2012). This trend began to change in the 1970s - women still withdrew from the workforce when they had children, but returned when their children were older.

Several social changes have contributed to the increase in women's participation rates (the proportion of women who are either employed or actively seeking employment) - women are now able to work and progress in a wider variety of jobs as a result of increased access to post-school education and the increased use of contraception to manage fertility (ABS, 2003). Flexible working arrangements (particularly part-time work) and greater availability of child care and maternity leave, means fewer women withdraw completely from the workforce because of child care responsibilities. Demographic changes, including having children later, smaller family sizes, and higher levels of educational attainment have been intertwined with these in employment changes (Baxter, 2013a). 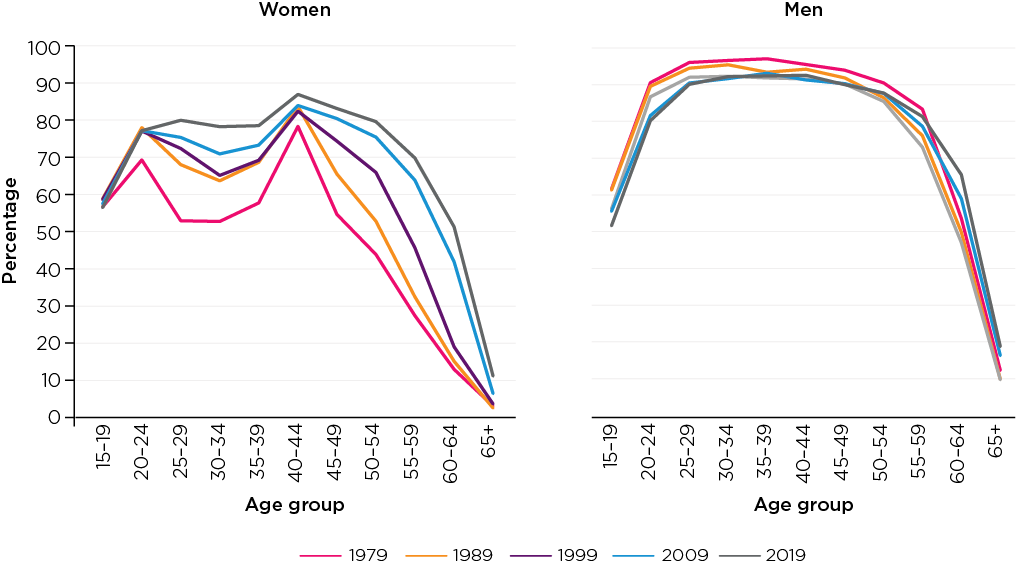 While men's labour force participation rates have changed relatively little over the last 40 years, there are marked differences in employment rates of men during this period. Between 1977 and 1997, the composition of Australian industries changed, and rates of employment in service industries, which are dominated by females, increased substantially, while growth in industries traditionally employing full-time male workers, such as utilities, mining and manufacturing, slowed, resulting in a drop in employment rates for men across all age groups (Commonwealth Treasury of Australia, 1999). In 2019, rates of unemployment for men under the age of 35 are similar to those of 1979, but for men in their forties and fifties, unemployment rates were higher in 2019 than they were in 1979 (Figure 2). On the other hand, for women under the age of 35, unemployment rates were considerably higher in 1979 than they were in 2019. 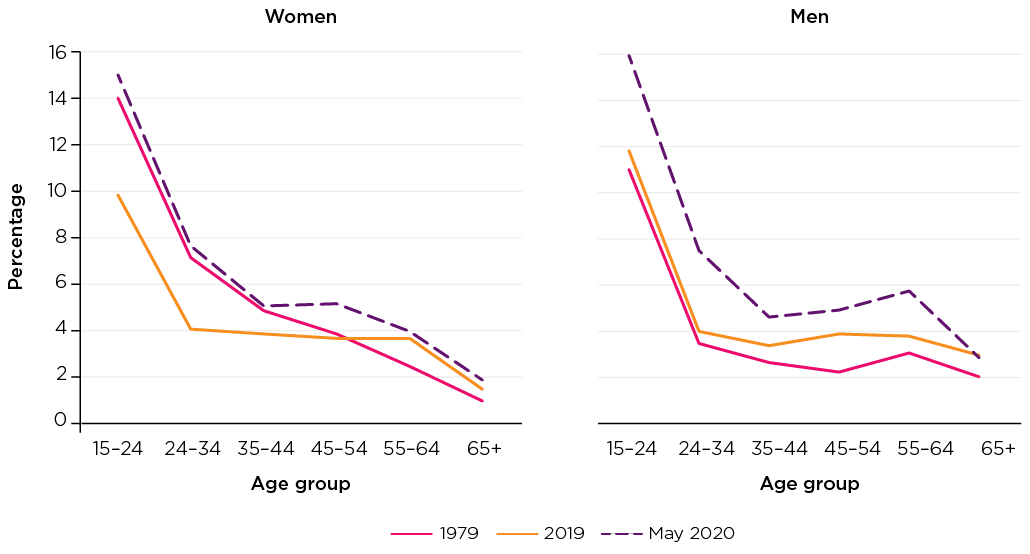 One of the most significant social changes over recent decades is the increased labour force participation of mothers. This change can be seen in Figure 3, which shows the employment rates of partnered mothers and single mothers, by age of youngest child, in selected years from 1984 to 2019. 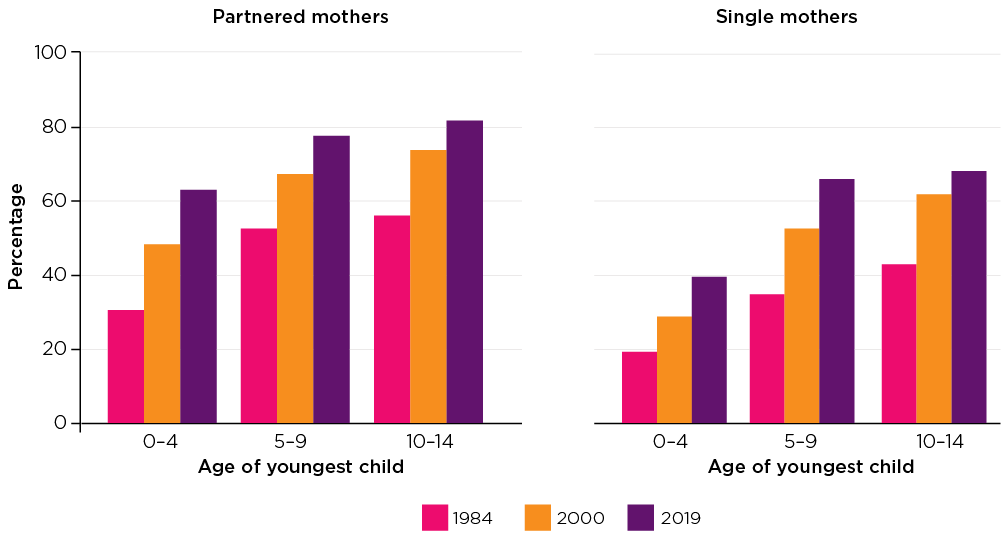 Consistent with trends in the increased labour participation of mothers, changes in community attitudes reflect an overall endorsement of mothers' being in paid work and support for gender equality. Figure 4 shows the extent to which men and women over the age of 15 in 2001 and 2015 agreed with a series of statements that tap into their views about parental employment. 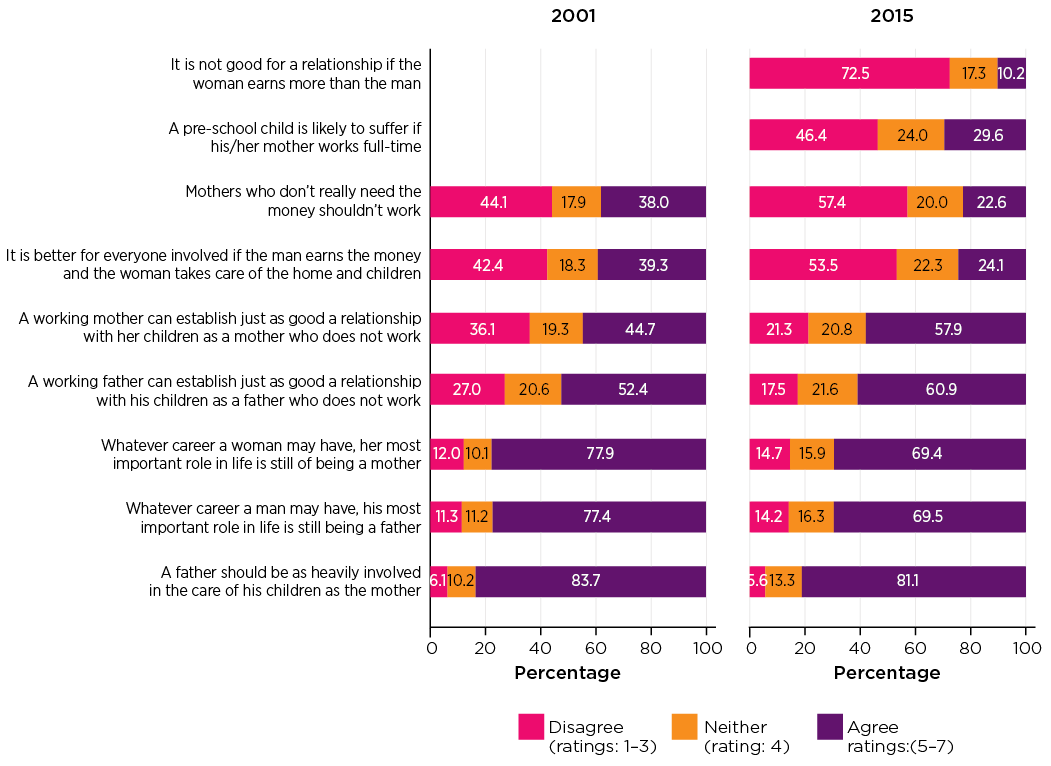 But some things stay the same

With increased employment among mothers, family employment patterns have shifted over recent decades away from that of a breadwinning father and stay-at-home mother (Baxter, 2019). However, census data show relatively little change in the employment patterns of fathers over the last 25 years (Figure 5). In two-parent households, the majority of fathers worked full-time, with the percentage in part-time work increasing only slightly, from 6% in 1991 to 10% in 2016.

While the number of couple-with-children families featuring two working parents has increased (Figure 6), the allocation of Australian parents' time to paid and unpaid work has remained very gendered, with fathers usually in full-time paid employment, and mothers often employed part-time or not in employment (Baxter, 2013b, 2015). The estimated number of stay-at-home-father families has remained low over the last 40 years. While there was an increase in the percentage of stay-at-home fathers in two-parent households between 1981 and 2001 (1.9% to 4.5%), this increase did not continue, with the percentage of stay-at-home fathers in 2016 (4.6%) similar to that in 2001 (Baxter, 2018). 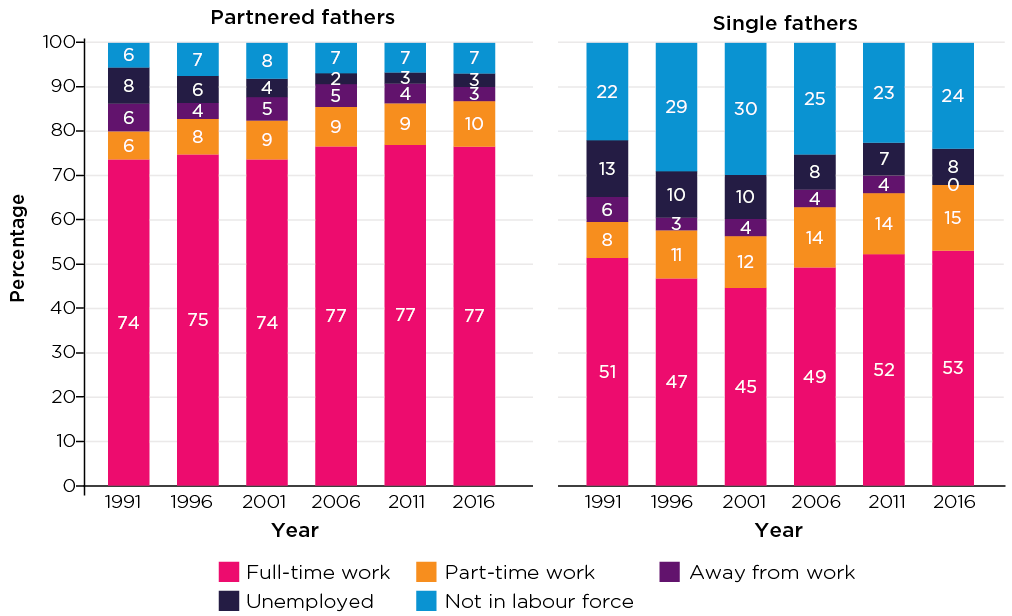 Note: Away from work includes those classified as employed but with work hours of zero or not stated.
Source: Baxter (2019)
Credit: Australian Institute of Family Studies 2020 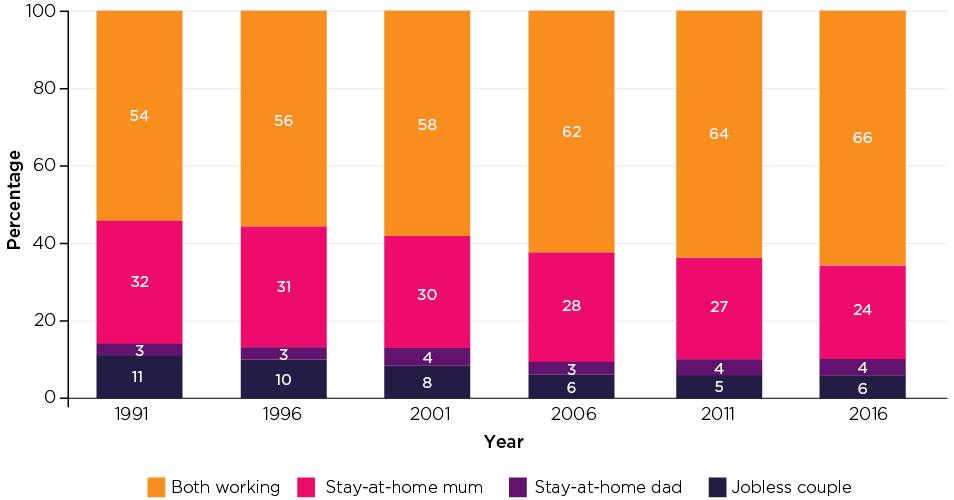 Notes: 'Stay-at-home' parents are those who are not in work who have a partner/spouse who is in work. 'Jobless' families are those in which both parents are not working, including those away from work. 'Both working' indicates both parents spent at least one hour in paid work in the reference period. Excludes families in which either parent's labour force status was not stated. Percentages may not total exactly 100.0% due to rounding.
Source: Baxter (2019)
Credit: Australian Institute of Family Studies 2020

Fathers today may be more involved in caring for their children than fathers 40 years ago but in most families, the number of hours that fathers spend in employment remains the same before and after having children (Baxter, 2019). This is in sharp contrast to the changes that women experience at this time, when reductions in paid work typically occur, balanced by increases in time on caring and other household work.

Fathers commonly fit parenting and caring for their children around their hours of employment, with weekends providing more opportunity for shared time with their children than weekdays. Mothers' time use patterns are dramatically different, as their time in employment is lowest when they have an under one-year-old child, gradually increasing as their children get older (Baxter, 2019).

The relatively low uptake of part-time work by fathers, as a means of helping to care for children, is evident in Figure 7, which shows the proportion of mothers and fathers who reported using various types of work arrangements to care for their children. While there was steady growth in the proportion of fathers using some work arrangement to care for children from 1996 through to 2008, this has levelled off since this time. The most common arrangement for fathers is flexible working hours, with around 30% of fathers using this arrangement since 2008. The next most common arrangement for fathers is working at home, with the percentage of fathers working from home so that they can care for their children increasing from 7% in 1996 to 15% in 2017. 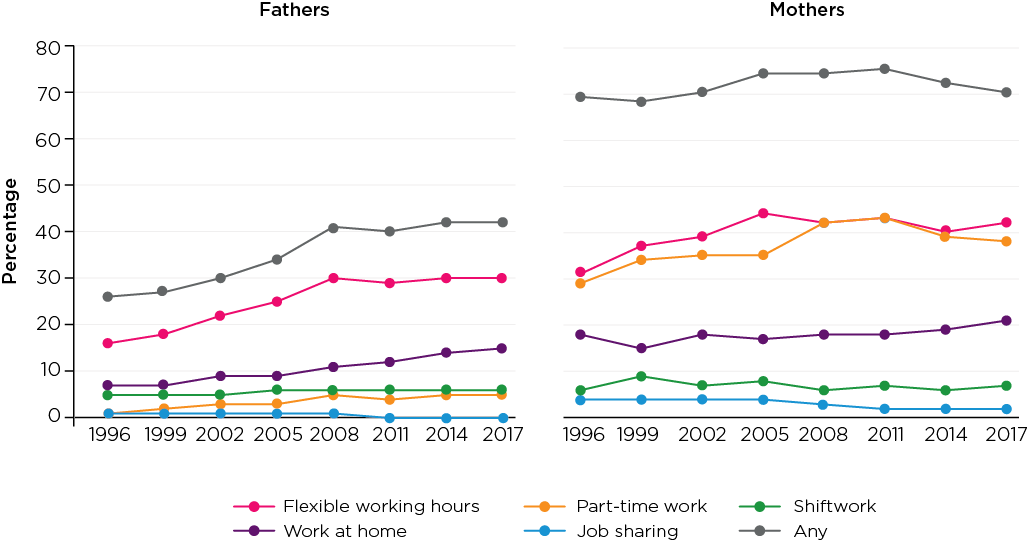 Very few fathers reported working part-time in order to care for children. However, for mothers this was a common arrangement. The percentage of mothers who reported working part-time due to parenting responsibilities increased from 29% in 1996 to 43% in 2011, and has since declined, to 38% in 2017. The percentage of mothers who used flexible working hours and working from home was also higher than that of fathers. In 2017, one in five mothers worked at home, and two in five used flexible working hours to help juggle their work and family responsibilities.

While part-time work, flexible working hours and home-based work are more common for mothers than for fathers, previous research has shown that when mothers work full-time, fathers more often use their own work arrangements to help care for the children, particularly in relation to flexible work, which is much more likely in families where mothers work full-time compared to those where mothers are not employed (Baxter, 2019).

Over the last few decades, there have not only been changes in how many people are working, but also how many hours we work, and where we work, with more workers, particularly parents, working some hours from home.

With increased levels of female employment, rates of both full- and part-time work are higher for women now than they were 40 years ago (Figure 8). In 1979, more women worked full-time in their teens and early twenties than they do today, with more women participating in further education before moving to full-time work in their mid twenties. Part-time employment is also more common for women now than it was 40 years ago.

The percentage of men who worked full-time was considerably higher in the late 1970s than it is today. In 1979, less than 5% of men aged between 20 and 65 worked part-time. In 2019, part-time work is still much less common for men than for women, but rates of part-time work have increased, particularly among men in their late teens and twenties, and also in the transition to retirement. 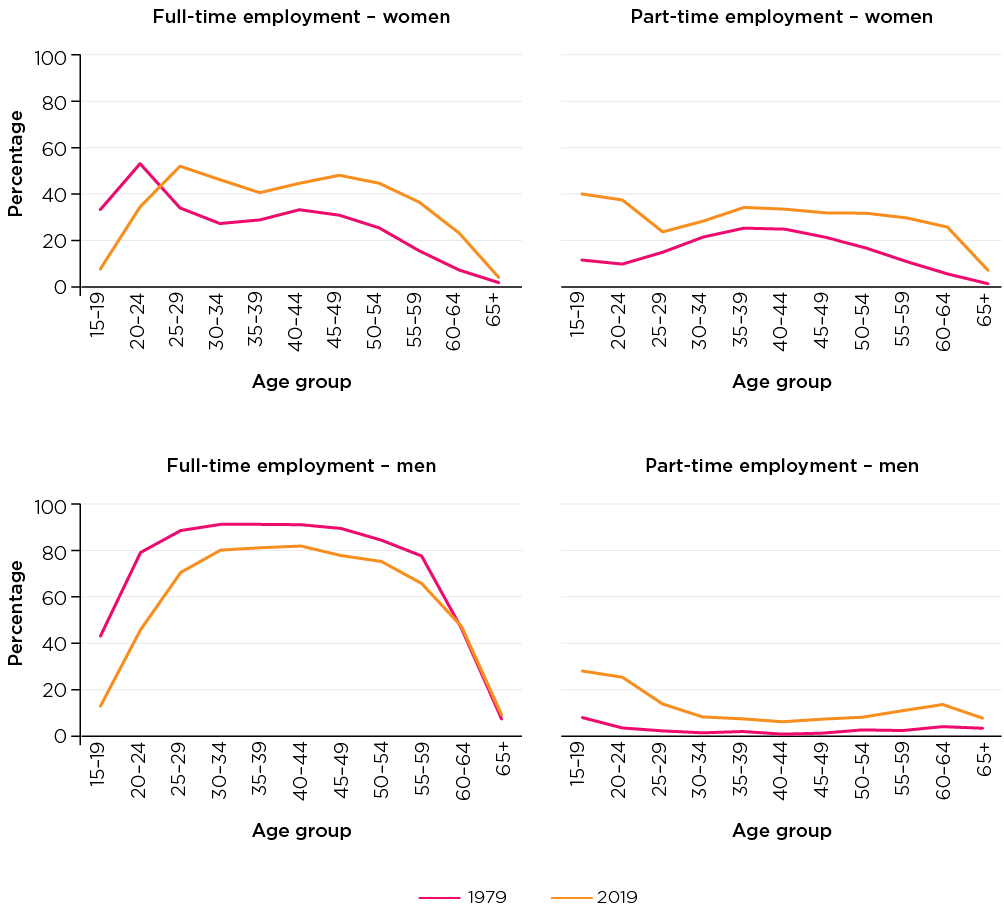 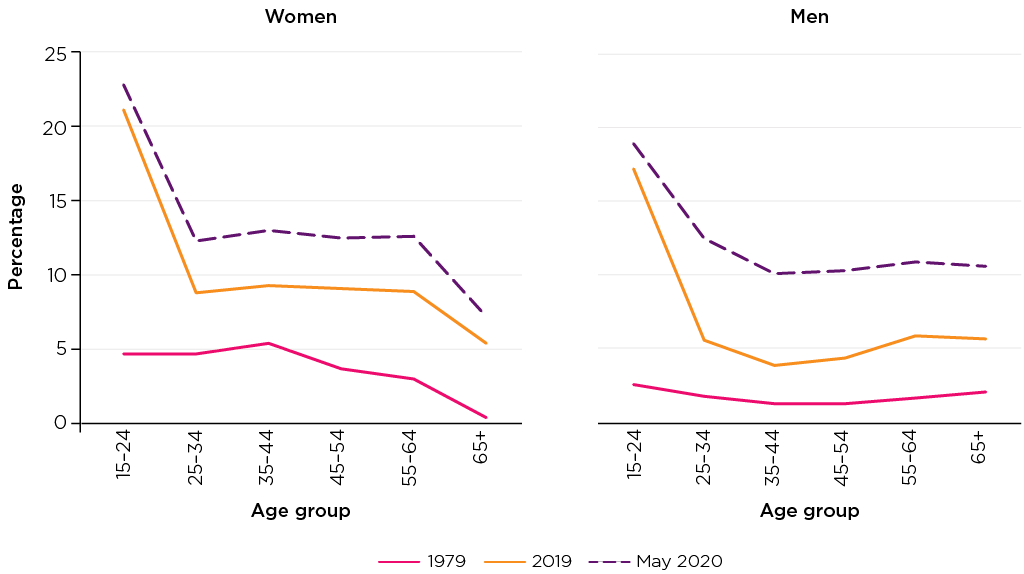 In 2020, rates of underemployment increased substantially as a result of the COVID-19 pandemic, with many thousands of workers either being stood down or having their work hours reduced. Among Australians aged over 18 who had a job in the first week of April 2020, 24% worked less hours than usual due to COVID-19; and among those who worked less hours, 60% said it was due to a reduction in the amount of work available, while approximately 15% said it was because they were stood down by their employer. The remaining 25% did so because of other reasons, such as illness or injury or changes in shifts (ABS, 2020b). 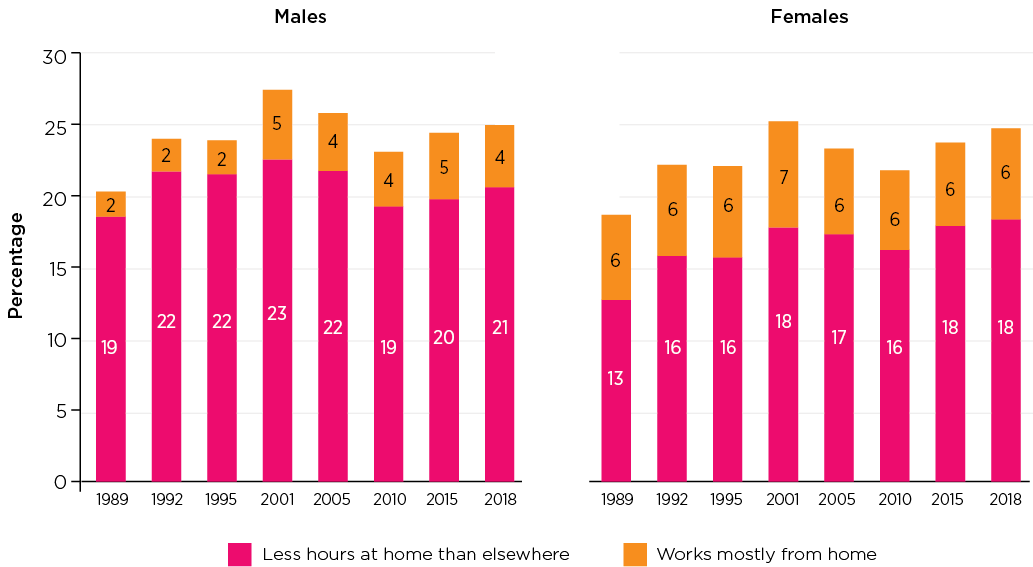 Note: Employed persons working at least 50% of their usual weekly work hours at home were classified as working mainly from home.
Source: ABS Working from home survey (1989, 1992 and 1995) and HILDA 2001 to 2018
Credit: Australian Institute of Family Studies 2020

The COVID-19 pandemic has changed the nature of work in 2020 in many ways, including where we work, with those who were able to work from home doing so for several months, and many workers still having not returned to their usual locations of work at the time of publication. The ABS household impacts of COVID-19 survey found that nearly half (46%) of all Australians who were working in late April to early May were working from home, with 17% increasing their number of hours working from home since COVID-19 (ABS, 2020c). The long-term impact of COVID-19 on where we work is yet to be seen, and it is likely that many workers will continue to do at least some work from home even after the pandemic is over.

For many people, working from home is a way to help balance work and family responsibilities. Even in the late 1980s and early 1990s, home-based work was more common for parents with dependent children than for other workers. For example, in 1989, females accounted for 74% of all workers who were employed at home, with 28% of those working from home saying they did so because of child care responsibilities (ABS, 1989). Data from the HILDA Survey shows that over the past 20 years, rates of home-based work were significantly higher among parents with children under 15, compared to other workers (Figure 11). For example, in 2018, almost a third of employed parents with children under the age of 15 did some work from home, compared to 22% of men and 21.5% of women with no children under 15. 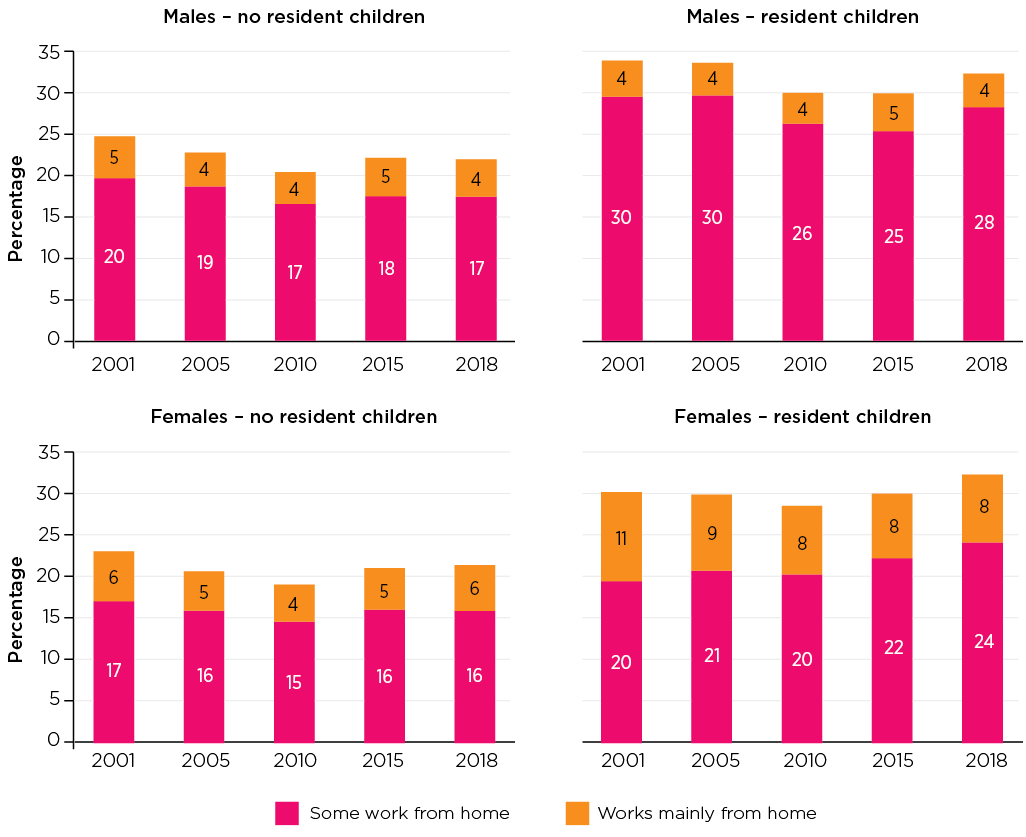 Note: Employed persons working at least 50% of their usual weekly work hours at home were classified as working mainly from home. Resident children are defined as being under the age of 15.
Source: HILDA 2001 to 2018
Credit: Australian Institute of Family Studies 2020

Over the last few decades, an increasing proportion of young people pursue education beyond secondary school, with some doing so by combining study with employment. Figure 12 presents proportions of young people in their late teens and early twenties who were working, studying, or both, across census years. 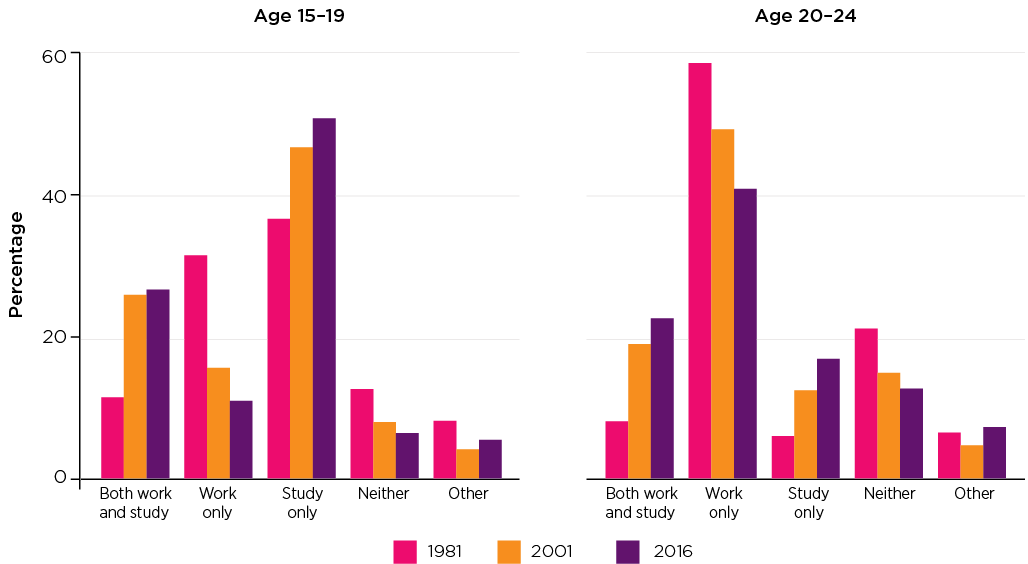 Families Then & Now: Households and families

This second snapshot from our Families Then and Now series outlines some of the changes in Australian households and families from 1980 to today.

This first snapshot from our Families Then and Now series outlines changes in the housing arrangements of Australian families from 1980 to today.