Many fathers in Australia are working long hours and have schedules that are not family-friendly, including evening and weekend work. This can get in the way of their time with children.

Discussions about how to address work-family challenges largely centre on mothers, but the challenges also are real for fathers. There is increased recognition that a "good" father is directly involved in the care of children. But this requires time, and fathers are often time-constrained due to work.

Many fathers in Australia are working long hours and have schedules that are not family-friendly, including evening and weekend work. This can get in the way of their time with children.

Our paper Long hours and longings examines this issue. Central to our study are issues about fathers' work-family balance, and about how children's views and experiences of fathering may be shaped by their father's work.1

Children's voices are rarely heard in debates about work and family, yet they can be discerning observers of how their father's job impacts the family. They appear to be aware of the importance of those jobs for family income, but also of the impact of those jobs on family time.

When asked about how much time they had with dad and how they felt about it (see Figure 1), around two in three children said they had enough time, or that they definitely enjoyed time with their dad. Just over one in three said dad works too much, and 17% said they wished he did not have to work.2 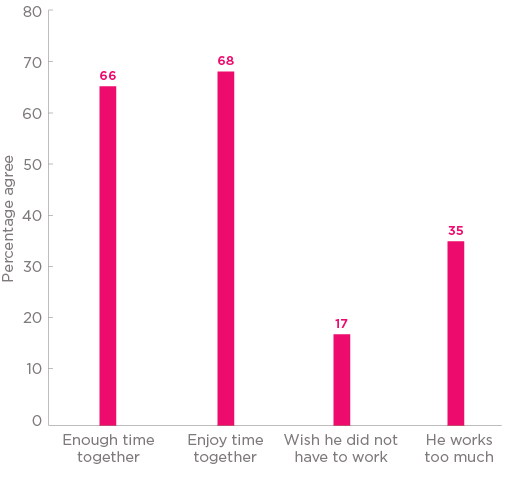 The study analysed the likelihood of a child reporting positively or negatively on their father's work-family situation, and it found that:

Neither finding is surprising. However, the study also found that:

Looking at a father's work schedule - i.e., when dad worked - the study found another set of effects (see Figure 3):

If fathers were able to change their work start and stop times, children were less likely to say that they wished he did not have to work. They were also more likely to say they had enough time with dad if he worked flexible hours. 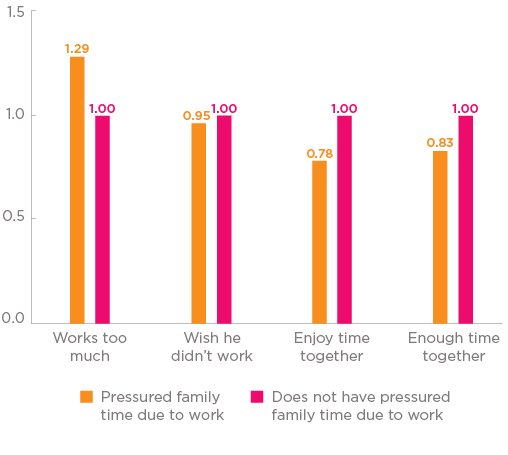 At a time when "fathering" is recognised as more than simply being a breadwinner, there are significant challenges for fathers who wish to be more involved in family activities, but who are prevented by their work. Our findings show that the frustration goes both ways, and that fathers' experiences of work demands are mirrored in their children's experiences of fathering.

1 The study used data collected in the Longitudinal Study of Australian Children (LSAC). It looked at children when they were 10-11 years old, and two years later when they were 12-13. The focus was children's answers to series of questions about their fathers' jobs. In total, 5,711 paired father-child observations were used.

2 The key child-reported measures used are: Dad works too much vs about the right amount or too little; Wish dad did not have to work very much vs wish a little bit or don't wish, not a problem; Enjoy time with dad definitely true vs mostly true, mostly not true or definitely not true; Enough time with dad about right or too much, vs nowhere near enough or not quite enough. Multivariate analyses were used to analyse these data, incorporating more detailed information about children and families than has been presented in this research summary.

Fathers and work: A statistical overview

This article shows that while mothers’ work circumstances change considerably after having a child, fathers’ tend to change very little.

Conflicts between work and family and fathers’ mental health

This article is adapted from a presentation given at the AIFS 2018 Conference: Fathers at Work symposium.

This article is adapted from a presentation given at the AIFS 2018 Conference: Fathers at Work symposium.