Past and present adoptions in Australia | Australian Institute of Family Studies

Home » Publications » Past and present adoptions in Australia

"Adoption" is a word that elicits mixed responses from people. Adoption practices in Australia have varied over time. Given the prevalence of adoption in the past, particularly in the late 1960s and early 1970s, a significant proportion of the population has had some experience of or exposure to issues relating to adoption. This Facts Sheet provides a summary of the ways in which adoption currently operates, past adoption practices, and the potential impacts adoption has on those involved.

There are three types of adoption currently operating in Australia:

Despite the large growth in the number of Australian children in out-of-home care over the last two decades, adoption of these children is rare. This is because there is a strong push for them to be restored to or maintain active contact with their parents. In addition, most jurisdictions have the capacity to: (a) make permanent care orders (which provide security of placement with a foster/kinship carer); and/or (b) have policies relating to the creation of permanency plans 1 when there is no foreseeable likelihood of children being able to safely return to the care of their parents. Unlike adoption, these foster/kinship care arrangements do not formally extend past a child turning 18 years of age.

Concerns about high levels of infant mortality and occasional reports of infanticide cases led to the first legislation on adoption in Australia being enacted in Western Australia in 1896, with similar legislation following in other jurisdictions from the 1920s. 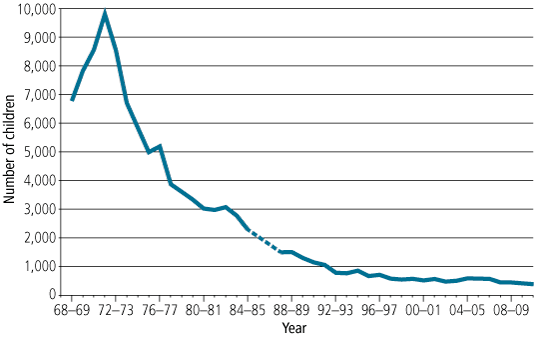 This significant change in adoption rates coincided with a range of legislative, social and economic factors, such as:

From the 1920s, adoption practice in Australia reflected the concept of secrecy and the ideal of having a "clean break" from the birth parents. Closed adoption is where an adopted child's original birth certificate is sealed forever and an amended birth certificate issued that establishes the child's new identity and relationship with their adoptive family. Legislative changes in the 1960s tightened these secrecy provisions, ensuring that neither party saw each others' names.

The experience of closed adoption included people being subjected to unauthorised separation from their child, which then resulted in what was often called "forced adoption". From the 1940s, adoption advocates saw it as desirable to relinquish the child as soon as possible, preferably straight after birth.4

From the 1970s, advocacy led to legislative reforms that overturned the blanket of secrecy surrounding adoption, though until further changes were made in the 1980s (or 1990s in some Australian jurisdictions), information on birth parents was not made available to adopted children/adults.

Beginning with NSW in 1976, registers were established for both birth parents and adopted children who wished to make contact. In 1984, Victoria implemented legislation granting adopted persons over the age of 18 the right to access their birth certificate (subject to mandatory counselling). Similar changes followed in other states (e.g., NSW introduced the Adoption Information Act in 1990).

Reunion services are now part of the ways in which governments and agencies are trying to address the negative impacts of separation on (birth) parents and children from these past adoption practices.

The practice of closed adoption changed gradually across each of the states and territories in Australia from the late 1970s through the 80s and 90s.

With the implementation of these legislative changes, adoption practices shifted away from secrecy. Now, the vast majority (84% in 2010-11) of local adoptions (but not intercountry adoptions) are "open", where the identities of birth parent(s) are able to be known to adoptees and adoptive families. Among local adoptions, only 16% of birth parents in 2010-11 requested no contact or exchange of information with the adoptive family (AIHW, 2012).

Open adoption has led to a number of improvements in practices, such as:

There is limited research available in Australia on the issue of adoption practices during and following the period of closed adoption in Australia. The available information highlights a number of important issues:

Participants are being sought for a nationwide study into past adoption experiences to identify the support and service needs of people affected by closed adoption.5

Two surveys are being conducted. These are for:

For the first survey, input is being sought from people who were affected in any way, such as:

The second survey is for professionals servicing the current needs of people affected by adoption (e.g., counsellors and psychologists).

The researchers are particularly keen to hear from these professionals, and an online survey and personal interviews are being conducted. Please see the website for further information.

The researchers are seeking to compile a complete picture of people’s adoption experiences, during and following the times of closed adoption, in order to better understand their current needs for support and services.

After the data have been analysed, a report will be made to government in June 2012.

The surveys can be accessed online. If you are unable to complete a survey online, contact Freecall 1800 352 275  or email us.

1 "Permanency planning" refers to making decisions about alternative long-term foster/kinship care placements for children as early as possible to avoid the negative consequences of continuing to have failed attempts to restore children with birth parents.

2 The Council of the Single Mother and Her Children, set up in 1969, aimed to challenge the stigma of adoption and provide support to single and "relinquishing" mothers. The status of "illegitimacy" disappeared in the early 1970s, starting in 1974 with a Status of Children Act in both Victoria and Tasmania (in which the status of such births was changed to "ex-nuptial").

3 Abortion also became allowable under some circumstances in most states from the early 1970s; see the 1969 Menhennitt ruling (R v Davidson) in Victoria and the 1971 Levine ruling in NSW.

4 Women's magazines became fierce advocates for adoption, with waiting lists of prospective adoptive parents beginning to emerge in the 1940s and 1950s. As demand for babies outstripped supply (though not for babies with disabilities), the pressure to relinquish was particularly high in maternity homes, where matrons and social workers were often personally acquainted with the prospective adoptive parents (see Marshall & McDonald, 2001; Swain & Howe, 1995).

5 This study has been commissioned by the Australian Government Department of Families, Housing, Community Services and Indigenous Affairs, on behalf of the Community and Disability Services Ministers Council.

Dr Daryl Higgins is the Deputy Director (Research) at the Australian Institute of Family Studies.

Children in stepfamilies: Their legal and family status