This Families Week fact sheet takes a close look at the data about "stay-at-home dads", to see if that perception matches reality.

It's generally perceived that "stay-at-home dads" are becoming more common, as modern families strive to juggle their work and care responsibilities. This Families Week fact sheet takes a close look at the data, to see if that perception matches reality. We have confined our analysis to two-parent, opposite-sex families; this allows us to compare and contrast stay-at-home-father families with stay-at-home-mother families. And because we are focussing on that comparison, other family forms, such as single-parent and same-sex-parented families, are not covered in this fact sheet.

What is a stay-at-home dad?

We will refer to a father as "stay at home" if he has children aged under 15 years living with him, he is not working, and he has a spouse or partner who is working some hours.1

How many stay-at-home dads are there?

Applying the definition described above, in the census week in 2011:

Drawing on the ABS Labour Force Survey, we estimate that there were 75,000 stay-at-home-father families in June 2016. This represented 4% of two-parent families, suggesting little change over the previous five years.3

From 1981 to 2011, the estimated number of stay-at-home-father families increased off a low base until plateauing in 2001, as shown in Figure 1.4 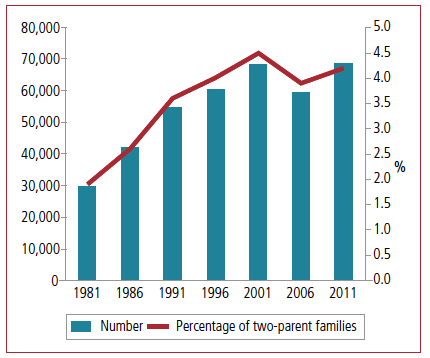 Stay-at-home-father families are very diverse (see Figure 2), with some fathers unemployed (so actively seeking work), some not in the labour force (not looking for work, for a variety of reasons) and some with a job but not working any hours in that job (referred to here as "on leave"). In these families, mothers may work part-time or full-time hours. 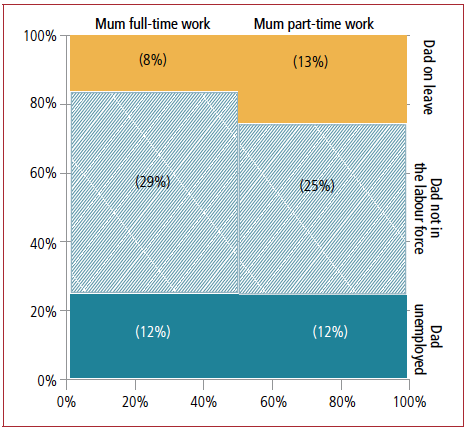 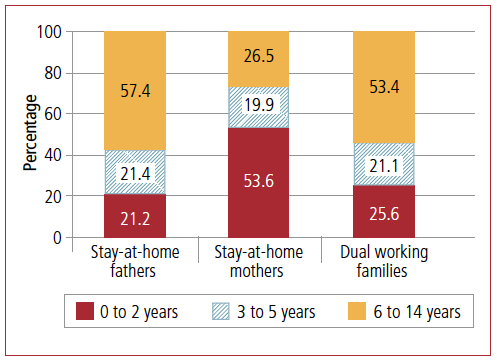 Time use in stay-at-home-father families

Time-use data is available from the HILDA study,5 in which respondents report on how much time per week they typically spend in a number of activities, including "Housework", "Child care" and "Employment".6 Over the years 2002 to 2015, for families in which at least one parent was employed:

This time-use data by family employment arrangement is shown in Figure 4.

Figure 4: Time use of parents by family employment arrangement 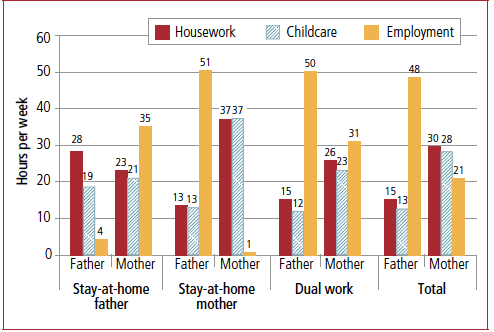 This is not the reverse of stay-at-home-mother families. 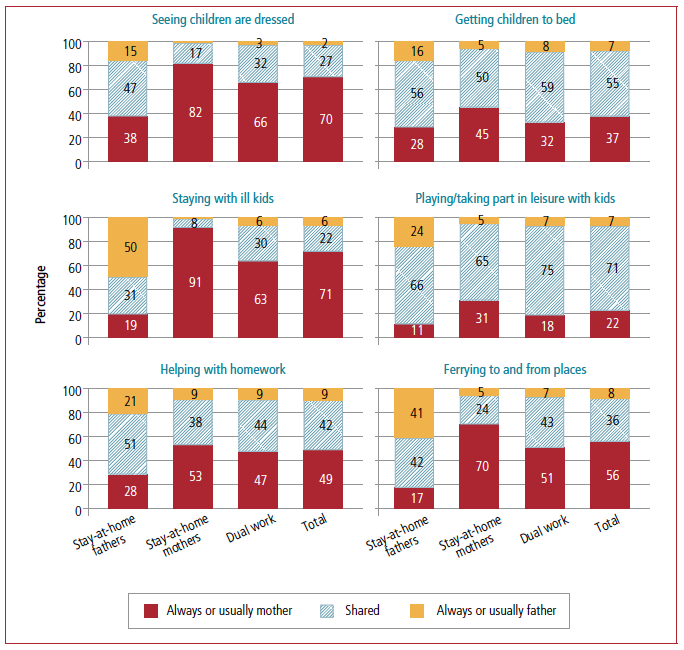 When comparing child-care activities by parents in different types of families we see that:

The data show that stay-at-home fathers do take on more responsibility for child care than fathers in other family forms, but that the average stay-at-home dad is still far from "Mr. Mum".

Parents' attitudes toward parenting roles may influence the roles they adopt, or their attitudes may be shaped by the roles they're expected to perform. To explore how attitudes and employment arrangements are related, we focus here on parents' responses to this statement:

Children do just as well if the mother earns the money and the father takes care of the home and children. Parents were asked to indicate whether they agree with this statement, on a scale from 1 (strongly disagree) to 7 (strongly agree), which we have grouped into "disagree" (a score of 1 or 2), "middle" (3 o 5) or "agree" (6 or 7).

However, across the board, most parents agreed that children do just as well in stay-at-home-father families. 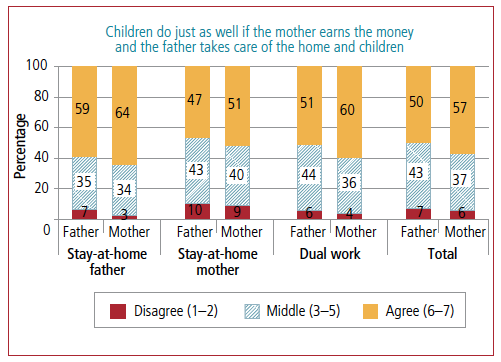 1 A similar approach to this has been used elsewhere, although with underlying differences in the data used. See, for example Kramer, K. Z., & Kramer, A. (2016). At-Home Father Families in the United States: Gender Ideology, Human Capital, and Unemployment. Journal of Marriage and Family, 78(5), 1315-1331.

5 The HILDA project was initiated and is funded by the Australian Government Department of Social Services, and is managed by the Melbourne Institute of Applied Economic and Social Research (Melbourne Institute). All HILDA analysis is based on responses of mothers and fathers with children aged under 15 years.

6 "Housework" includes housework, household errands and outdoor tasks such as home maintenance, car maintenance and gardening; "Child care" includes playing with own children, helping them with personal care, teaching or supervising them, or driving them places; "Employment" includes paid employment and commuting.

Australian men who become stay-at-home dads while their partners go out to work are still comparatively rare, despite a growing perception their nu

'It's not for lack of wanting kids...' A report on the Fertility Decision Making Project

This report attempts to gain an understanding of the reasons for fertility trends, at both the macro and micro levels