Internationally, there has been a trend towards a geographic concentration of poverty and affluence (Massey, 1996). For instance, the growth in income inequality between neighbourhoods since the 1970s in Australia mirrors the trends of other developed countries such as the US and Canada (Gregory & Hunter, 1995; Hunter & Gregory, 2001). More recently, Vinson (2007) showed that concentrated disadvantage was prevalent in all Australian states. He reported that when statistical local areas (SLAs) in each Australian state were ranked according to indicators of disadvantage, a small number of SLAs accounted for a large proportion of the instances of different types of disadvantage in each state. Vinson also showed that the strength of associations between indicators of disadvantage - such as unemployment rates and child maltreatment - were reduced in areas with higher levels of social cohesion (i.e., the strength of social bonds and connectedness of people living in an area), suggesting that neighbourhood social processes play a significant part in shaping the community's wellbeing.

Figure 1: Model of neighbourhood influences on children's outcomes (based on Roosa et al., 2003)

In the present study, we investigate the effects of neighbourhood socio-economic disadvantage, residents' perceptions of the neighbourhood and neighbourhood social processes on 4-5 year old children's hyperactivity, emotional symptoms and peer problems using data from Growing Up in Australia: The Longitudinal Study of Australian Children (LSAC).

In this article, we answer a series of interrelated questions:

LSAC was designed to provide a nationally representative sample of Australian children's experiences as they grow and develop. For the current study, we used Wave 1 data for the 4-5 year old cohort (children born between March 1999 and February 2000; n = 4,983; collected in 2004). The study sample was randomly selected from the Health Insurance Commission's Medicare database. A further description of the design and sampling of LSAC can be found in Gray and Smart (2008). Survey weights were used to ensure that the sample was representative on a range of demographic characteristics (Soloff, Lawrence, Misson, Johnstone, & Slater, 2006).

Three of the five scales from the parent-reported Strengths and Difficulties Questionnaire (SDQ; Goodman, 1997) were used to assess child functioning: Hyperactivity, Emotional Symptoms and Peer Problems. Hyperactivity scale assesses the child's restlessness, concentration span and impulsiveness. The Emotional Symptoms scale measures the child's tendency to display negative emotional states such as sadness, fear or worry. The Peer Problems scale assesses problems such as the child not having friends, not being liked, being picked on, playing alone or preferring adult company. Neighbourhood influences on Conduct Problems and Prosocial Behaviour, the other two scales of the SDQ, were the focus of a previous study (Edwards & Bromfield, 2009).

Parental perceptions of the neighbourhood

Neighbourhood socio-economic status was measured by the Index of Advantage/Disadvantage of the Socio-Economic Indexes for Areas (SEIFA). Lower scores indicate more disadvantage and less advantage and higher scores indicate the reverse. The SEIFA is a composite of 31 variables, such as income, unemployment, occupation and education. The validity of the Index of Advantage/Disadvantage has been established by the Australian Bureau of Statistics (ABS) (Trewin, 2004).

Neighbourhood residential instability was measured using ABS Census data at the postcode level that recorded the percentage of residents in the neighbourhood who had moved in the last 5 years.

Neighbourhood ethnic homogeneity was assessed by the percentage of residents in the postcode who had been born in Australia.

Remoteness of the neighbourhood was measured by the Accessibility/Remoteness Index for Australia (ARIA; ABS, 2006). The ARIA measures remoteness based on road distances to 201 centres where services are located. The index does not include socio-economic and population size indicators and comprises five categories that reflect the remoteness from a range of goods and services and opportunities for social participation (highly accessible, accessible, moderately accessible, remote and very remote). As there were very few postcodes in this study sample that were remote (n = 11 postcodes, 3.2%) or very remote (n = 5 postcodes, 1.5%), these two ARIA categories were grouped together for this study.

The current study includes an observation of physical disorder derived from interviewers' ratings of the general condition of buildings nearby the family residence. Specifically, interviewers were asked to rate buildings within 100 metres of the study child's house. Interviewers reported whether the nearby buildings were badly deteriorated, in poor condition and in need of repair, in fair condition, well-kept or if there were no other dwellings nearby. As only a small minority of buildings were rated as badly deteriorated (n = 51, 1.0%) and in poor condition (n = 100, 2.0%), these categories were combined with those in fair condition (n = 1,064, 21.4%). Thus, the physical disorder measure comprised three categories: bad to fair, well-kept and no other dwellings nearby.

Several variables were also included to control for factors that may predispose families to live in particular neighbourhoods: parents' combined weekly income (here called family income), mother's level of education, in a single-parent household, in a household where no one worked, and in a household where one or both parents were born overseas. We also accounted for child demographic factors that are known to be associated with children's outcomes (child's gender and age, whether the child was of Aboriginal or Torres Strait Islander origin). The descriptive statistics for child outcomes, family and child characteristics, and neighbourhood variables are provided in Appendix A (Table A1).

In the second model, the three measures derived from parent perceptions of their neighbourhood were added: neighbourhood facilities, neighbourhood safety and cleanliness. The second model allowed us to: (a) see whether differences between children residing in the five levels of neighbourhood socio-economic disadvantage were reduced; and (b) to assess whether any of these variables had a significant association with the outcome variable.

Neighbourhood socio-economic status was measured by the SEIFA Index of Advantage/Disadvantage (Trewin, 2004). We separated neighbourhood socio-economic status into five levels (quintiles), with the first quintile being the most disadvantaged, and the fifth quintile the most advantaged (see Text Box 1 for more details). All of the results presented are derived from statistical models that account for child and family demographic variables (see Text Box 1 and Appendix B for more details).

Are there differences in children's outcomes due to the level of neighbourhood socio-economic disadvantage in the area in which they live?

Figure 2 shows the differences in children's behavioural and emotional problems between children living in different areas of neighbourhood socio-economic disadvantage after differences in weekly family income, child age and gender, child Indigenous status, single-parent family status, parental employment status and mother's education are taken into account. The "I" bars on the columns represent 95% confidence intervals; "I" bars that do not overlap are significantly different at the 95% level of confidence. The columns represent the difference in children's outcomes from children living in the most advantaged neighbourhood socio-economic quintile. 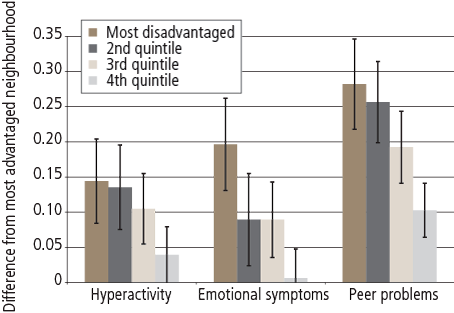 Figure 3: Differences between children's level of hyperactivity, emotional symptoms and peer problems, by neighbourhood disadvantage, before and after including neighbourhood safety and belonging 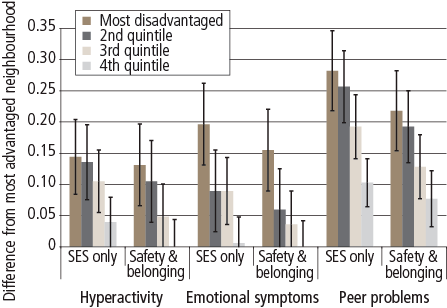 However, in isolation, this will not be able to close the gap between children living in the most advantaged and disadvantaged neighbourhoods.

Were the quality of neighbourhood facilities important?

It is possible that a measure of the availability rather than the quality of neighbourhood facilities/services, or questions that focused more specifically on the quality of early childhood services, such as child care, preschool and maternal child health, would have been more sensitive than the current measure. The findings from the evaluation of an area-based program that enhances the coordination, relevance and - crucially - the number of early childhood services delivered by non-government organisations in disadvantaged communities has had some positive early impacts, suggesting that neighbourhood facilities are important (Edwards et al., 2009; Muir et al., 2010).

Strengths and limitations of the current study

The present study has some limitations. Neighbourhood effects may be due to decisions parents make about the neighbourhoods in which they choose to live (Leventhal & Brooks-Gunn, 2000). However, all neighbourhood studies based on non-experimental data have this limitation and we attempted to reduce the possibility of selection bias by controlling for relevant child and family demographic characteristics.

While building social capital is clearly important, addressing the service delivery system, enhancing parenting skills and providing employment in these areas are also important elements of a comprehensive strategy in addressing area-based disadvantage.

Multilevel models (also referred to as linear random effect regression models, mixed models, random coefficient models and hierarchical linear models) are one way to obtain accurate estimates of the effect of neighbourhood disadvantage on children's outcomes, as they control for similarities in children's responses due to living in the same postcode (Snijders & Bosker, 1999). As children reside within neighbourhoods (postcodes), the multilevel models partition the variation in children's scores on the outcome indices into the family level (Level 1) and the neighbourhood level (Level 2). This enables accurate estimation of the determinants (e.g., neighbourhood disadvantage or child's gender) of children's outcomes.

As a preliminary step, we ran a model with no predictor variables, as this partitioned the variability in outcomes into the between- and within-neighbourhood proportions. An intra-class correlation coefficient (ICC) for the percentage of variance between neighbourhoods was then calculated (Snijders & Bosker, 1999). The higher the level of the ICC, the more residing in that neighbourhood explains the outcomes.

As many of the neighbourhood variables were categorical (e.g., neighbourhood socio-economic status, remoteness, and physical disorder), multiparameter tests were employed to test the overall significance by improving the model fit. The deviance statistic is used to assess improvements in model fit (Snijders & Bosker, 1999). The difference in the deviances between the multilevel model without the categorical variable indicates the improvement in model fit resulting from the inclusion of the categorical variable.

* This appendix is adapted from Edwards and Bromfield (2009).

Acknowledgments: This paper uses a confidentialised unit record file from the Longitudinal Study of Australian Children (LSAC). The LSAC project was initiated and is funded by the Commonwealth Department of Families, Housing, Community Services and Indigenous Affairs (FaHCSIA) and is managed by the Australian Institute of Family Studies. The findings and views reported in this paper, however, are those of the authors and should not be attributed to either FaHCSIA or the Institute. A related paper with different child outcomes (conduct problems and prosocial behaviour) has been recently published in Children and Youth Services Review (Edwards & Bromfield, 2009). The authors wish to thank the executive editor of Family Matters, Professor Alan Hayes, as well as the reviewers of Children and Youth Services Review and Family Matters, as many of their suggestions were incorporated into this manuscript. We would like to thank Diana Smart for her helpful comments on an earlier draft of the manuscript. Thanks also to Sebastian Misson, former Data Manager of LSAC. Most importantly we wish to thank the families who have generously given their time to participate in the LSAC.