The COVID-19 pandemic has put a spotlight on the financial circumstances of families in Australia.

Since the start of the pandemic, many families have experienced job losses, reduced work hours or business closures, contributing to a drop in income for individuals and families. Some families' incomes have been bolstered by the financial supports put in place by the Australian Government. Additionally, many families have taken actions to address their financial concerns such as changing their spending habits or drawing down on savings and superannuation (Warren, 2020).

This snapshot reports on families' experiences of financial concerns and stresses at May-June 2021, as captured in the third Families in Australia Survey. The effects of the COVID-19 pandemic were ongoing at the time of this data collection, although they varied across Australia during the weeks data were collected. While this survey is not representative of the Australian population, it provides insights into some of the experiences and concerns of Australian families.1

1 Statistics have been calculated using post-stratification weights (based on age group, gender, state, education and whether the respondent speaks a language other than English) to compensate for some bias resulting from over-representation of respondents with certain socio-demographic characteristics. However, the Families in Australia Survey is a non-probability sample and, as such, it is not representative of the Australian population.

In the Families in Australia Survey 3, in May-June 2021, when asked about their level of concern about their family's current financial situation, almost 70% of respondents said that they were at least a little concerned, with one in six (17%) saying they were very concerned (Figure 1). Overall, levels of concern about the family's future financial wellbeing were slightly higher than concerns about current financial wellbeing, with three out of four respondents saying they were at least a little concerned, and one in five (21%) very concerned.

Notes: a Couple-combined income for respondents with a spouse or partner. Figure shows predicted probability of being very concerned about the family's current/future financial situation, based on logistic regressions that also include household composition, relationship status, housing tenure, work hours and age of respondent.

Other findings from the analysis of the survey data:

Current and recent experiences of financial stress provide some evidence of the impacts of financial difficulties on families. In the Families in Australia Survey, in May-June 2021, more than one in five respondents (21%) reported that in the previous six months, because of a shortage of money, they or someone in their household had asked for financial help from friends or family. Almost one in five (18%) reported not being able to pay gas, electricity or phone bills on time (Figure 3). 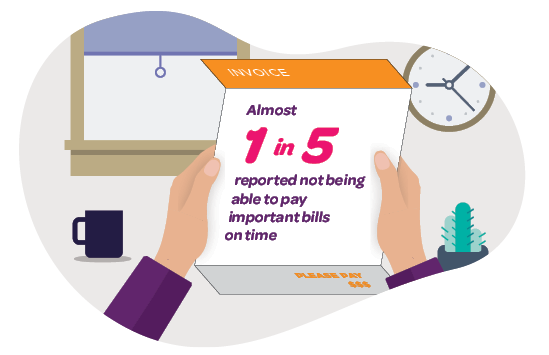 One in three respondents said that they or someone in their household had experienced at least one of a list of financial stresses in the previous six months (see Figure 3). More than one in 10 (12%) reported experiencing three or more of these kinds of financial stress.

We note these measures of financial stress indicate higher levels of financial stress than are obtained in the Australian Bureau of Statistics (ABS) Household Financial Resources publication, 2 reporting on survey data collected at the end of 2020. The ABS reported that 10% of households had sought financial help from family and friends in the previous 12 months and 7% could not pay their gas, electricity, telephone or internet bill on time. 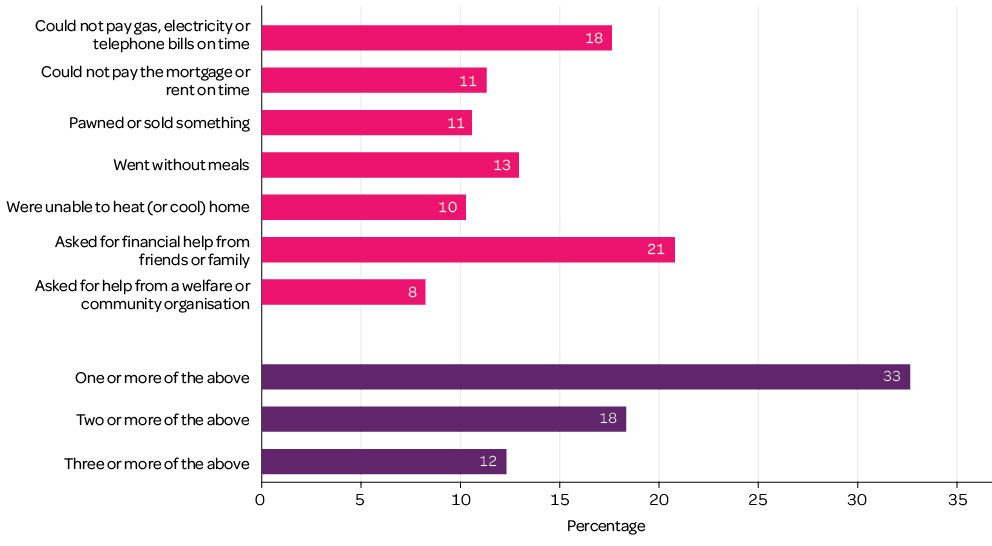 Note: Respondents were asked 'In the last six months, has anyone in your household experienced any of the following due to a shortage of money?'

I struggle every week to put food on the table and meet basic needs. We do not lead an extravagant life and don't smoke or drink but by the time child care, school fees and needs, kids' food and needs are met there is nothing left.
Female, 39, household with children

I generally don't put on the air conditioner to either heat or cool my flat. I turn all appliances off at the wall to save on the electricity bills. I very rarely eat out. I can usually make ends meet but there is nothing extra.
Female, 51, single-person household

I go to a church-run foodbank & receive a generous amount of food for $25 each week. I am grateful for that magnificent service.
Female, 71, single-person household 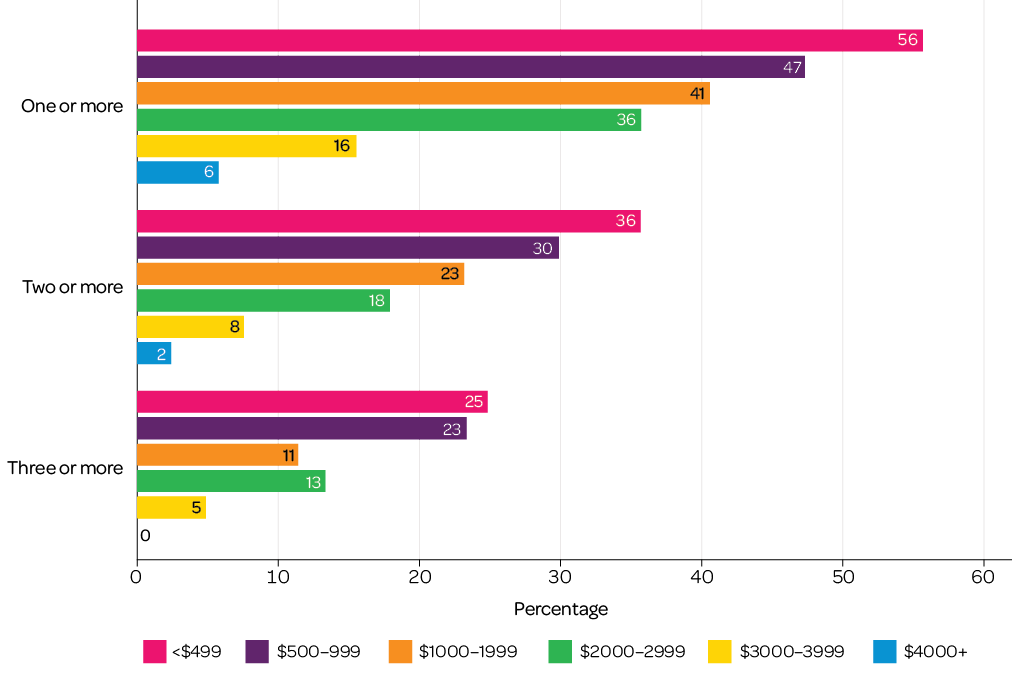 Note: Shows after-tax income, couple-combined for those living with a spouse or partner.

Financial stress and concerns about finances

Financial stress and concerns about finances 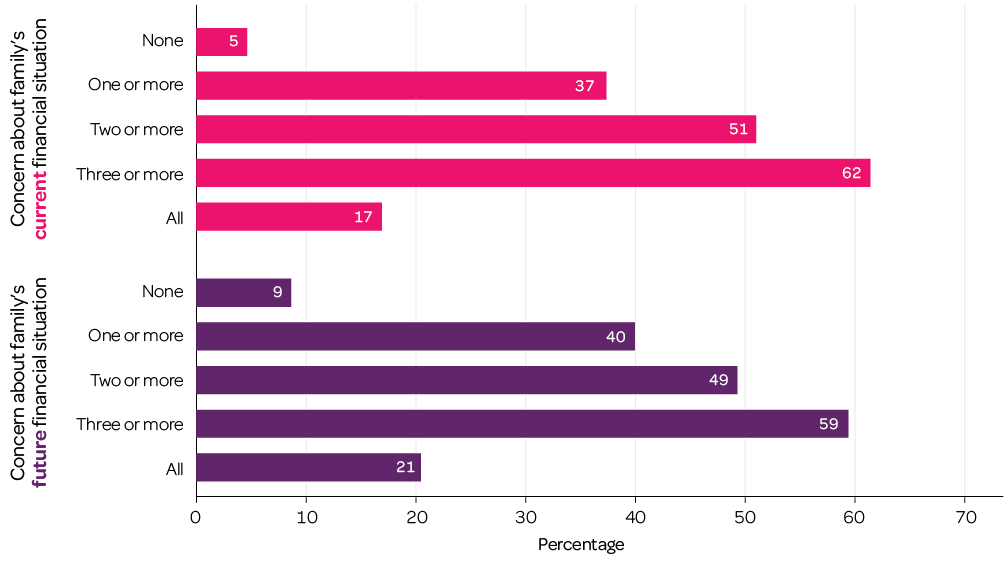 What people said about financial concerns

What people said about financial concerns

Open-text responses provided additional insights into families' financial wellbeing and the reasons for concerns about their current and future financial situation. Some respondents reported being better off financially, due to being able to save money during COVID restrictions.

We are *so* lucky. As a maths tutor, I've now had to turn away people because I'm packed with kids who missed stuff due to COVID. We have actually been helping several other people during these ridiculous times.
Female, 56, couple-only household

Still very 'COVID-flush' due to not going anywhere for well over a year now and not going out very much as continual lockdowns and arts not properly open in Melbourne scene.
Female, 49, household with children

Because I haven't been able to travel as I would like in my retirement, finances are not a concern at all.
Female, 70, single-person household

However, the most common topics covered in these responses were related to concerns or challenges with finances. Some were in relation to employment uncertainty or family circumstances, such as poor health, that affected employment opportunities.

At the moment we are fine financially but we are trying really hard to get our mortgage paid off and having just lost my job and being 58, the future is uncertain.
Female, 58, couple-only household

We thought my partner would find employment easily when he started looking again a few weeks ago but that has not been the case. I am not coping with working full-time over the last year. It is putting a lot of strain on our relationship - the uncertainty around finances. I am not one usually to worry about money but my partner is and it has rubbed off on me.
Female, 43, household with children

I have been unwell in the past and have been unable to work for a substantial period. I do worry this could happen again. I do think my parents would let me stay with them indefinitely but as a 42-year-old adult that isn't a preferred solution.
Female, 42, household with children

A number of respondents referred to the cost of living, including housing affordability, the costs of school fees and child care, and costs related to mental or physical health.

It seems like we earn a lot, but we live in a high-cost area and child care fees are the main source of expenditure. Our finances are currently going backwards.
Female 39, household with children

House rental prices in [regional city] have skyrocketed. We would like to move into a three-bedroom home but finding one for less than $500 a week is extremely difficult. This makes it difficult to save money which, combined with the rising purchase price of housing makes it less and less likely that we will ever own our own home.
Male, 34, household with children

Income is currently stable, but I have significant medical bills expected in the next couple of months, which will be tricky financially.
Female, 37, single-person household

Respondents of various ages expressed concerns about having enough savings for retirement.

Through our work lives we had saved enough to clear our mortgage and save a little to add to our super. We were just able to manage as self-funded retirees for six years but due to increased costs of petrol, power, food, etc., plus low/non-existent interest rates, we had to apply for and were granted part pensions last year.
Female, 66, couple-only household

Concern is for our future after retirement. As a result of past life experiences neither of us have enough superannuation. While we own our property, we have no other major investments.
Female, 66, couple-only household

I am concerned about our financial situation as we have been thinking about retirement and do not feel our superannuation is enough to retire comfortably at an age that we can actually enjoy retirement.
Female, 47, couple-only household

We're in a fairly stable situation, financially. My main concerns for the future are whether we'll be able to retire with enough super.
Female, 36, multiple-adult household

My partner and I provide a lot of financial support to our children, both of whom have costs that exceed their incomes. While we have superannuation for ourselves it is unlikely to be sufficient to continue to help them at our current levels. Both are facing reduced income in the near future.
Female, 59, couple-only household

COVID-19 affected all members of my household with reduced, changed job conditions. My partner and I were eligible for JobKeeper, my casually employed young people were not. We also had to cover interstate rent for our other child during COVID. We had to fully support three young adults, and both of our hours/jobs were reduced. This made a significant dent in our savings.
Female, 51, multiple-adult household

One of my daughters is my landlord and another sends me a small amount of money each fortnight. Without their help I would not be able to get by on just the pension
Female, 67, single-person household

I was made redundant about 14 months ago, at the same time had some health issues. Had I not been living in a granny flat with my son, it may well have been a real struggle
Female, 65, single-person household

The Families in Australia Survey captured some insights into the financial concerns and stresses of families at May-June 2021. While many respondents at this time were not too concerned about their finances, there were other families who had experienced stresses and who were worried about their current and future finances. There were many factors impacting these financial concerns. Low-income families, in particular, faced more challenges than others. Aside from income differences, these experiences were also more apparent for renters and for single people. The COVID pandemic has focused attention on families' experiences of financial stresses and hardship. However, for many families the causes of their financial concerns are multi-factored and will continue to be relevant beyond the pandemic.

The Families in Australia Survey is AIFS' flagship survey series. Its scope is every person in every type of family, with the survey open to Australians aged 18 years and over.

The first survey in the series was Life during COVID-19, which ran from 1 May to 9 June 2020. The second Families in Australia Survey: Towards COVID Normal ran from 17 November to 22 December 2020.

Find out more about the Families in Australia Survey.