Due to the economic impact of COVID-19, many Australians have experienced changes to their employment, including job losses, stand downs and reductions in working hours. As a result, many families have had changes in their income. Families in Australia respondents were asked how their income had changed since COVID-19. Those who were living with a spouse or partner were also asked about changes to their partner's income.1

Figure 1: Change in own income and partner's income since COVID-19

Note: Weighted estimates. N = 6,696 respondents, 4,740 partners. At the time of the survey, many people were experiencing uncertainty about their job, work hours and income. This, combined with the introduction of the JobKeeper allowance and the JobSeeker supplement, means that it was not unreasonable for some people to be uncertain about how their, or their partner's, income had changed and respond with 'don't know'.

Figure 2: Change in either own or partner's income since COVID-19

In households with resident children under the age of 18, 49% had experienced a reduction in income, with 30% experiencing a substantial reduction (income reduced a lot).

1 In the analysis presented in this report, post-stratification weights (based on age group, gender, state, education and whether the respondent speaks a language other than English) have been used to compensate for bias resulting from over-representation of respondents with certain socio-demographic characteristics. However, it should be noted that the Families in Australia Survey is a non-probability sample and, as such, it is not representative of the Australian population. For further details about the Families in Australia Survey sample, please refer to Hand, Baxter, Carroll, & Budinski (2020).

Actions taken due to the financial impact of COVID-19

Actions taken due to the financial impact of COVID-19

Respondents were asked if they, or someone in their household, had taken any action in response to the financial impact of COVID-19. See Figure 3 for the full list of actions. Over 60% of all respondents had taken at least one of these actions.

Among those who reported a large drop in in their own or their partner's income, 89% had taken at least one action, and 50% had taken three or more actions. Even among those who had not experienced a drop in income, 54% reported having taken some action in response to the financial impact of COVID-19.

Figure 3: Actions taken in response to the financial impact of COVID-19 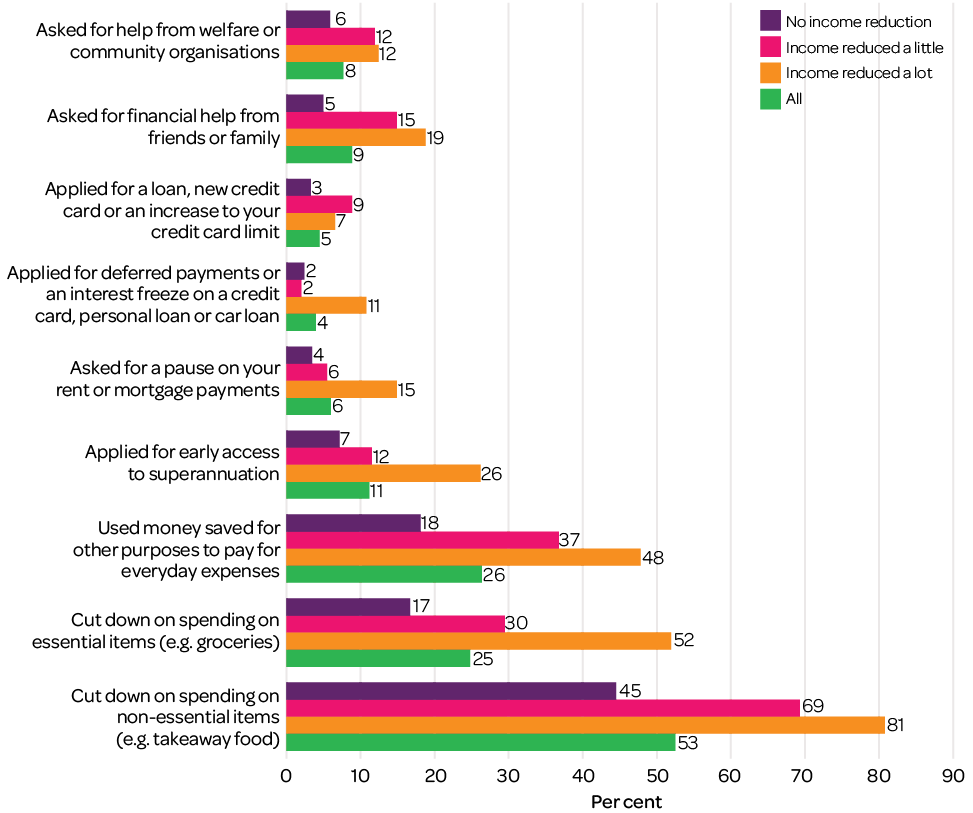 Note: Weighted estimates. N = 6,428. Those who did not report a reduction in their or their partner's income may have had other household members (such as adult children) who were impacted financially.

Cutting down on spending

Overall, the most common action taken as a result of COVID-19 was to cut down on non-essential expenses, with over half of all respondents (53%) and over 80% of those who had a substantial reduction in their own or their partner's income saying they had done this.

Don't go out for meals or play the poker machines.
Female, 68, couple-only household

Pretty much all we are spending money on now are groceries, utilities and small amounts of petrol. Female, 44, couple household with children

Some reported cutting down on essential items such as groceries - 30% of those who had a small reduction in income, and 52% of those who reported a substantial drop in income.

Many reported dipping into money that had been saved for other purposes. Just over a quarter of all respondents and almost half of those who had a large reduction in income said they had done this.

We had been saving towards buying a bigger home for our growing family. We may have to dip into our house deposit savings for everyday expenses at some point down the line now that I have gone on maternity leave and my husband's hours are reduced thanks to Covid-19.
Female, 31, couple household with children

I applied (and received) an increase to my credit card limit to bring my daughter home from the United Kingdom during the pandemic.
Female, 49, couple-only household

Getting help with housing costs

Around one in seven (15%) of those who reported a substantial reduction in their or their partner's income had asked for a pause on their rent or mortgage payments.

Among those paying rent, other housing-related actions taken, reported in open-text responses, included negotiating a rent reduction from their landlord or asking to defer a rent increase. For those paying off a mortgage, other actions included refinancing their home loan, reducing mortgage repayments or interest rates, changing repayments to interest only, or making only the minimum repayment. 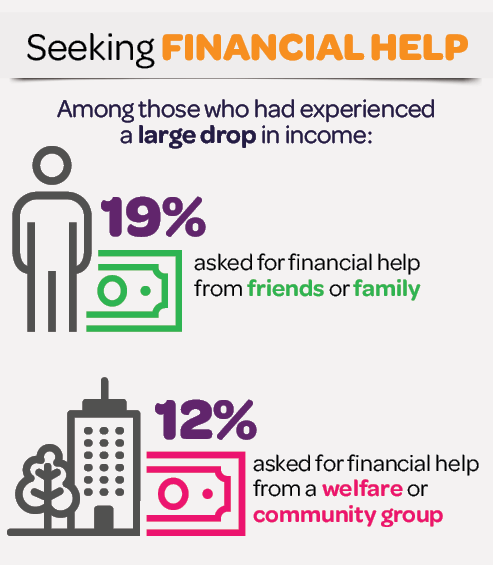 Among respondents who said that they or their partner had experienced a reduction in income (either a little or a lot), the likelihood of taking some of these actions differed by age, and whether or not they had resident children under the age of 18. For example:

The financial impact of COVID-19 has created particular challenges for older Australians. For retirees, actions taken were mainly related to changes to pensions and superannuation, including reducing superannuation drawdowns and applying for the Age Pension and concession card.2

Reduced partner's super pension payment so don't have to withdraw super funds for next 6 months or so.
Female, 53, couple-only household

Reduced our super-based pension payments to 2% from 4%.
Male, 69, couple-only household

If my husband hasn't regular casual work we will need to apply for Govt. pension for both of us. We don't have very much superannuation left.
Female, 66, couple-only household

Those who said they had taken other actions, not listed in the survey, in response to the financial impact of COVID-19 were asked to describe the types of actions they had taken. These responses varied depending on whether or not they had experienced a drop in income.

Among those who had experienced a reduction in their or their partner's income, commonly reported actions included:

Among people who had not experienced a drop in income, many reported saving money on child care fees, petrol and eating out. While some reported making changes to their savings and investments, financial actions taken as a result of COVID-19 were commonly aimed at helping their family or their community.

I have saved money on things like fuel and entertainment but have tried to reinvest this into local businesses to keep them afloat, e.g. cafes.
Female, 45, single-parent household

I am aware that we are very lucky to have higher incomes, but I don't have a huge sense of job security as I work in the not-for-profit sector and we are anticipating taking a hit in our funding. We have probably spent more money during this period, as we have tried to support local business in buying takeaway food once a week (for example, which we don't normally do).
Female, 41, couple household with children

Overall, these results suggest that, in response to the economic impact of COVID-19, Australians are mostly reducing their spending rather than increasing debt. There appears to be a high level of caution with spending, even among those who have not had a reduction in their own or their partner's income.

We have cut down spending significantly in case we lose our jobs over the next two years. We also have been giving money to family members to help them.
Female, 30, couple-only household

We are spending our savings to get by. It's stressful but we are people who always have a rainy day fund.
Female, 35, couple household with children

2 As part of the government stimulus package in response to COVID-19, two key measures were introduced to help retirees manage the financial impact of COVID-19. The minimum required pension drawdown rates have been halved for the 2019/20 and 2020/21 financial years. This means that retirees can reduce the amount they draw down from superannuation accounts, so they do not have to withdraw those assets at a time when their value is reduced. Depending on age, there is a minimum amount that must be withdrawn as a pension payment from an account based pension each financial year. Pre-COVID, the percentage drawdown required ranged from 4% for people aged under 65 to 14% for people aged 95 and older. (see www.ato.gov.au/rates/key-superannuation-rates-and-thresholds/?page=10). Deeming rates for age pensions (the assumed return on financial assets for the purpose of the income test) were also reduced. For some, this has resulted in increases in pension payments; and among those who were not previously eligible for a pension, some are now able to receive a part-pension and a concession card.

Of course, those whose income had been reduced as a result of COVID-19 expressed higher levels of concern than those who had not experienced a reduction in income. Among those who reported that their or their partner's income had been reduced a lot, almost 30% said they were extremely concerned about their family's current financial situation (Figure 4). But even among those who had not experienced a drop in income, around one in six reported being at least somewhat concerned. 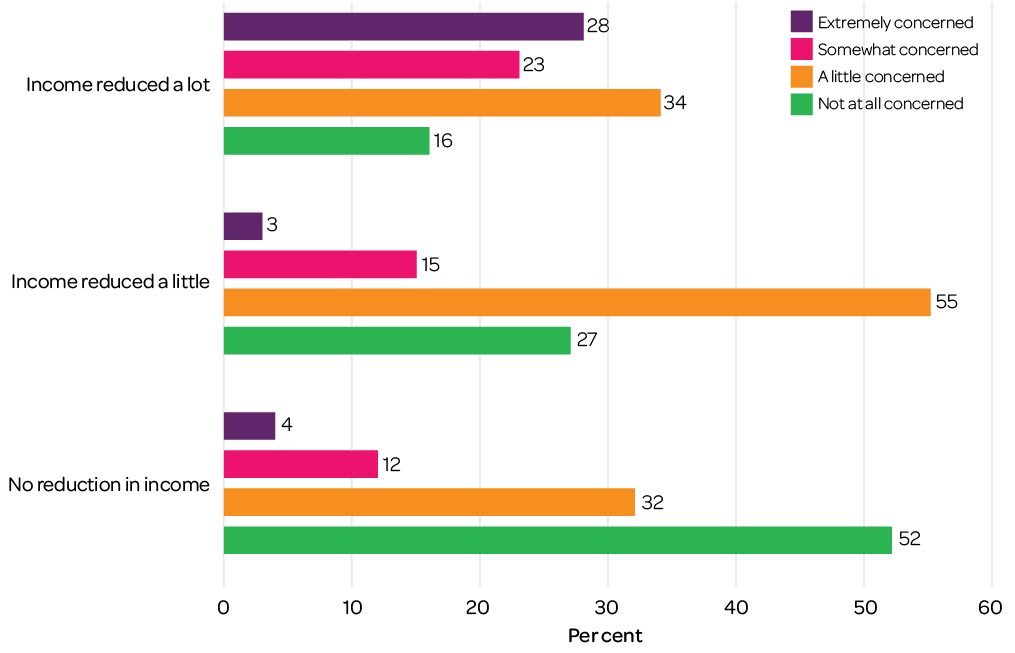 Comments in the survey indicated that concerns about their family's financial situation go beyond concern for themselves and their partner. They included concern about the financial situation of adult children living at home and family members living elsewhere; and ranged from feeling lucky to not have been impacted financially to issues faced by those who have experienced job loss or a drop in income from employment, businesses or investments. There were also comments about the impact on retirement plans and concerns about job security and career prospects (Figure 6). 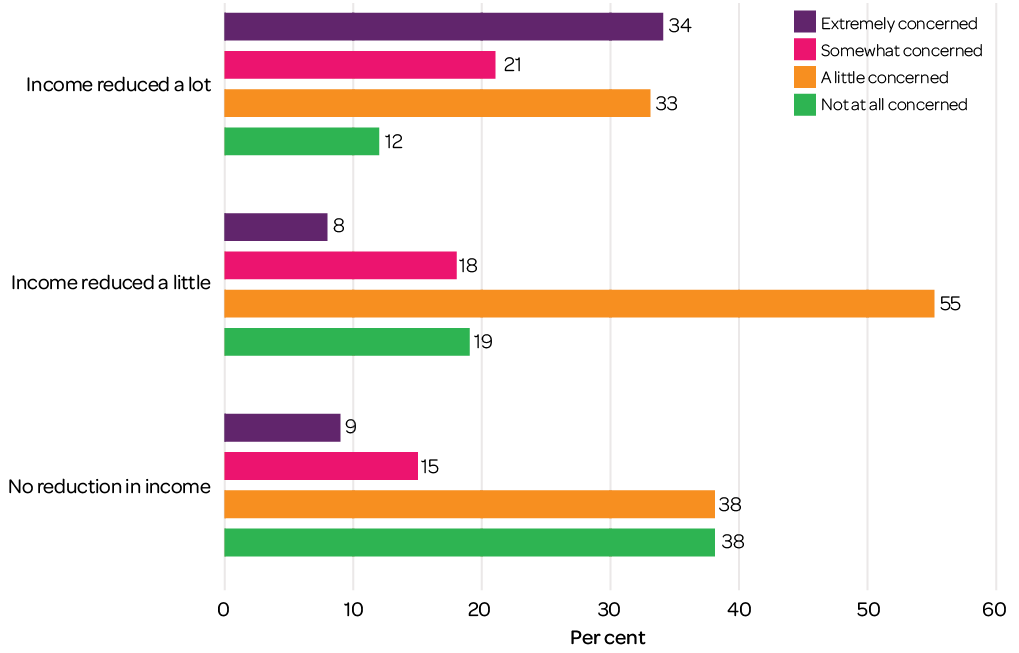 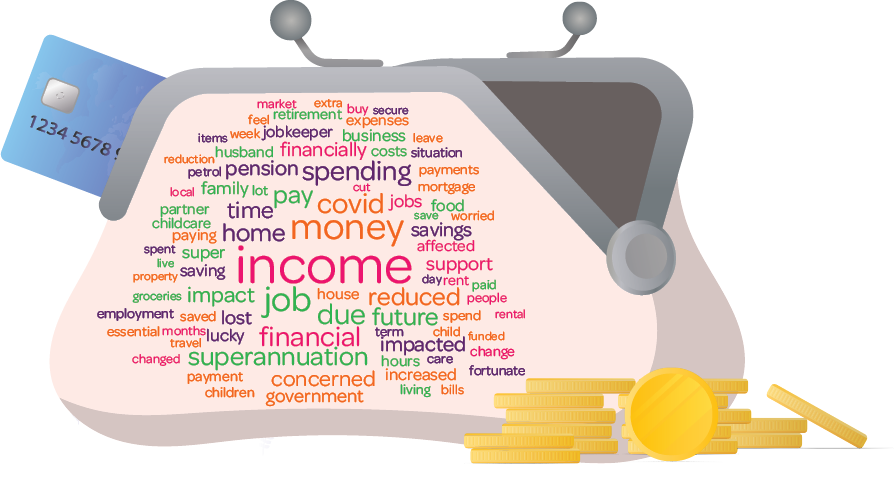 My partner's business will not recommence until the borders reopen. Job Keeper has made a huge difference to us. We are concerned that if Job Keeper is stopped after six months, the business will not survive and he will be out of work.
Female, 34, couple household with children

The uncertainty is a killer. I was feeling rather smug as my partner is in construction and I thought that was a protected industry as they can at least go to work. Then he and 100 in his company are made redundant. No notice. I don't feel so smug anymore. I thought perhaps if two of us were working (me at reduced but still working) that we could buy a home to capitalise on the expected fall in prices. That was just yesterday, today we have no hope and if he can't get a new job we will likely never have any hope of owning a home.
Female, 39, couple household with children

We are stressed about future work/income for me at the end of maternity leave (if I will be made redundant or have salary cut) and also how to manage child care for a baby starting day care when I return. We also have been relying on me going back to work to buy a new home as we currently have 2 children in a 2-bedroom apartment and experiencing difficulty with lack of space.
Female, 36, couple household with children

We are in a generation where superannuation was not compulsory so our saving time, while could have been all our lives, was not as possible. Wages weren't as high even when well qualified but then again housing wasn't as expensive. I think this time has just highlighted for me…the fragility of life and how important it is to have financial security. This is particularly frightening when I see our limited savings diminish before my eyes.
Female, 69, couple-only household

Life during COVID-19 was the first survey in the Families in Australia Survey (AIFS' flagship survey series). The first wave ran from May 1 to June 9 2020, when all states were in various stages of lockdown. There were 7,306 respondents. A second survey wave is planned for November 2020. Life during COVID-19: Help and support

This report looks at how we helped, and were helped by relatives, friends, community groups and professionals during…

This report focusses on how Australian families stayed connected when physically separated during the COVID-19 pandemic.