Families are very diverse and take many shapes and forms. They also typically extend across a number of households. Despite this diversity, there is a set of functions that families in all societies are commonly expected to provide: care and nurture of children, financial support of their members, and transmission of cultural and moral traditions and values.

To support the 2009 Families Week, the Australian Institute of Family Studies has prepared this facts sheet about the diverse range of families in which Australians live and the diverse ways in which they provide support to one another. The theme for Families Week in 2009 is "Celebrate how everyone makes a difference", which recognises the diversity of families and the different of ways in which their members support one another.

The families in which we live

The majority of Australian children live with both their parents until they leave home and begin to form their own families. In 2006, the living arrangements for children under 15 years old were:1

Figure 1 Proportion of children and young people living with a parent or other carer, by type of family, birth to 24 years, 2006 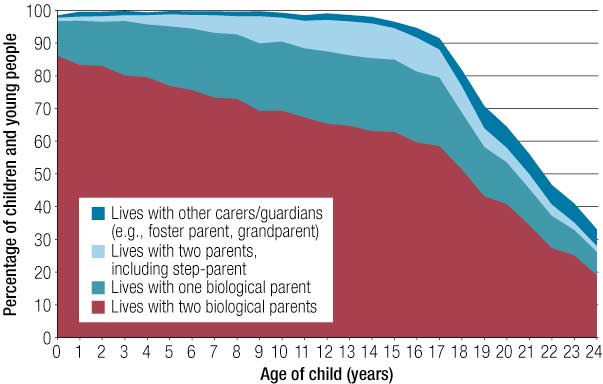 From around age 16, young peoples’ living arrangements start to change as they leave home and start to form a life more independent from their parents. In 2006, between the ages of 16 and 20, the proportion of young people living with at least one parent fell from 92% to 58%.

The living arrangements of adults change across life as a result of major life transitions, such as relationship formation, the birth and growth of children, children leaving home, separation from partner and, in later life, a partner moving to a nursing home or dying.

In 2006, there were some differences in the patterns of leaving home and forming independent living arrangements between women and men:3

Women started living with a partner at a younger age than men:

In relation to having children:

Families raise children and provide care to their members. At any point in time, one in five people aged 18 years and over are providing care for a person with a disability, illness or frail old age. The age groups most likely to be providing this type of care in 2006 were 45–54 year olds (28%) and 55–64 year olds (31%).4

Providing care within the household

Almost one in ten (9%) people (aged 15 years or older) cared for a family member with whom they lived:6

Figure 2 Proportion of people providing care to others within the household, by age, 2006 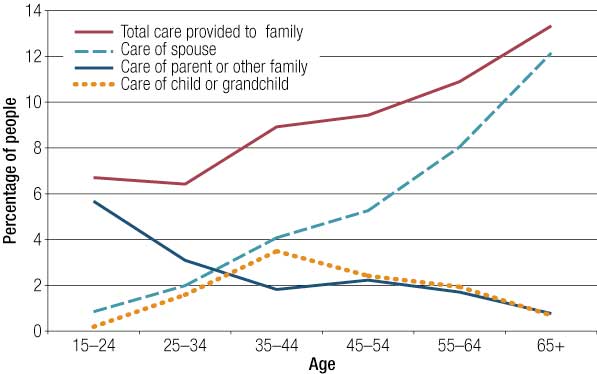 Providing care to family members living in another household

Six per cent of people (aged 15 years or older) provided care to a relative who lived in another household:7

Figure 3 shows the proportion of people by age group providing care for a family member living in another household. The proportion providing care increased from 3% of those aged 15–24 years to a peak of 10% of those aged 45–54 years. Caring for a parent is very uncommon for those aged 15–24 years (0.2%) and those aged 65 years plus (0.3%), but much more common for those aged 45–54 and 55–64 years (6% and 5% respectively). Younger carers are relatively more likely to be caring for other family members living elsewhere than are carers aged 45–54 years.

Figure 3 Proportion of people providing care to relatives living in another household, by age, 2006 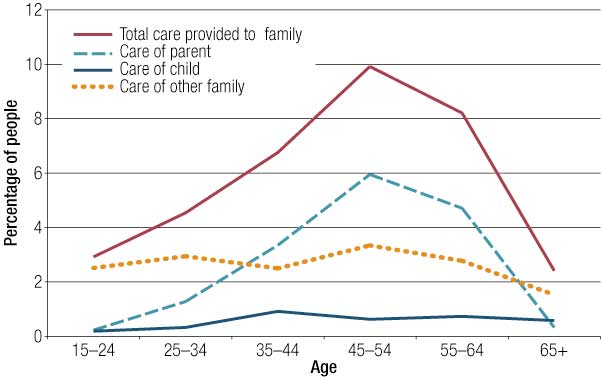 Families supporting and helping one another

In addition to care, families provide support and help to their members in a variety of ways, including help with domestic work, home maintenance, gardening, transport, running errands, child care, and providing emotional support and financial assistance.

Family members often provide financial assistance to other members of the family. Almost one in five adults aged 18 years plus (17%) provided financial support to adult relatives living elsewhere (not including support to children aged less than 25 years).

Support is also often given by parents to children who no longer live at home, but are still studying or establishing themselves in their own job or family (Figure 4). Men and women aged 45 to 54 years were the most likely to have older children living outside the household. Just over half of those in this age group provided support to their children. The main types of support provided include: 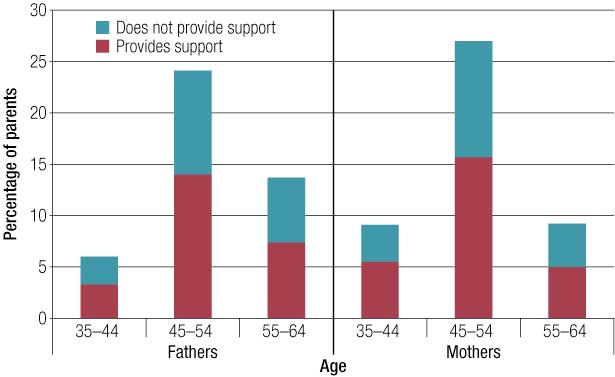 Some people are also responsible for younger children who no longer live in their household. This is most commonly the result of relationship breakdown. Of those who had young children living elsewhere, nine in ten reported providing support to those children, including:9

Most people maintain ties to the family they grew up with—parents, siblings, grandparents and others. It is through these connections that many people continue to feel that they can rely upon their family if they are in need of help. Eight out of ten people said that a family member would be someone they would turn to in times of crisis.10

Figure 5 shows how often people said that they saw members of their extended family or relatives not living with them:

Figure 5 Frequency of face-to-face contact with family outside of own household, 2006 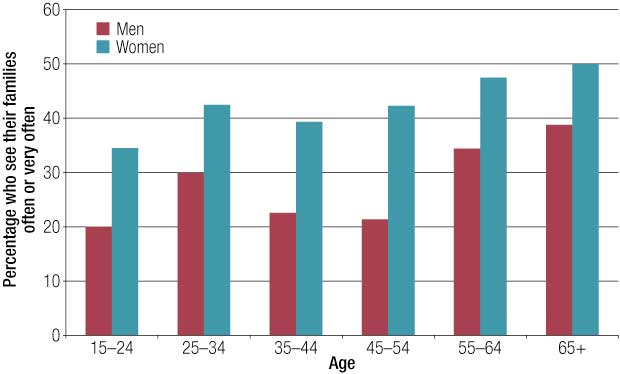 People’s contact with family may not always involve seeing each other; it frequently involves other forms of communication. As shown in Figure 6, a majority of people have at least weekly contact with their parents and also with any non–resident children, with the most popular form of contact being via telephone. 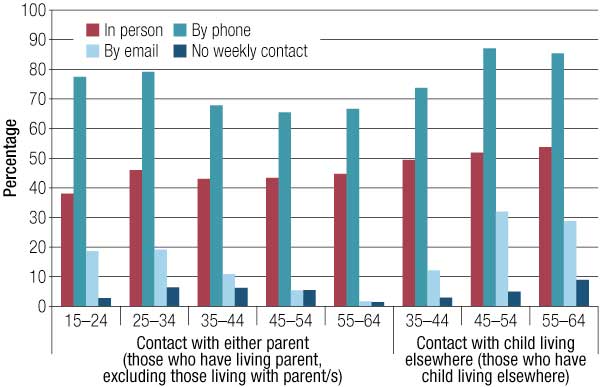 Families are very diverse and support one another in many different ways. Changes in life stage, such as leaving home, partnering, birth of a child, separation, and sickness, disability or frail old age require families to provide different types of support. The support provided by families is the thread that holds together the fabric of society. This becomes even more important in times of economic hardship.

1 Australian Bureau of Statistics (ABS) 2006 Census of Population and Housing, Australia, calculated from the one per cent sample file.

3 Data from the 2006 Census of Population and Housing, Australia, one per cent sample file.

8 ABS 2006 General Social Survey, Survey Summary of Results (Cat. No. 4159.0), Table 25, and calculated from the Confidentialised Unit Record File, Remote Access Data Laboratory. Percentages for types of support are based on those who only provide support to adult relatives.

11 The Household, Income and Labour Dynamics in Australia (HILDA) survey is funded by the Australian Government through the Department of Families, Housing, Community Services and Indigenous Affairs. It is managed by the Melbourne Institute of Applied Economic and Social Research, in collaboration with the Australian Institute of Family Studies and the Australian Council for Educational Research.