Most Australians at some point face the challenges of balancing work and family responsibilities. The pressures that families face when negotiating these issues has long been a policy concern. Discussions of work and family balance are prominent in the media and indeed everyday conversations.

Engagement in paid employment varies as we move through the various stages of life: finishing education, relationship formation, having children, caring for a sick or elderly family member, the arrival of grandchildren and retirement, for example. These life transition points are also often associated with changes in caring responsibilities.

After age 20-24 years, the employment rates of men and women diverge quite sharply, reflecting the effects of childbearing and childrearing on women's labour force participation:

Between 1996 and 2006, there were also increases in employment rates for men in all age groups. While the changes were more modest than for females, the largest increases were for older males, with the employment rate of men aged 55-59 years increasing from 66% to 74% and of men aged 60-64 years, from 42% to 55%.

Note: People who did not state their labour forces status on the Census form have been excluded from the calculations.
Source: Census of Population and Housing, Australia, online tables.1

Australia has long full-time working hours by international standards. In 2006 in Australia, full-time employed men worked an average of 45.9 hours per week, compared to many OECD countries with averages of less than 43 hours per week (for example, Denmark, France, Germany, Ireland, the Netherlands, Sweden).

Figure 2: Full-time and part-time work, males and females by age, 2006 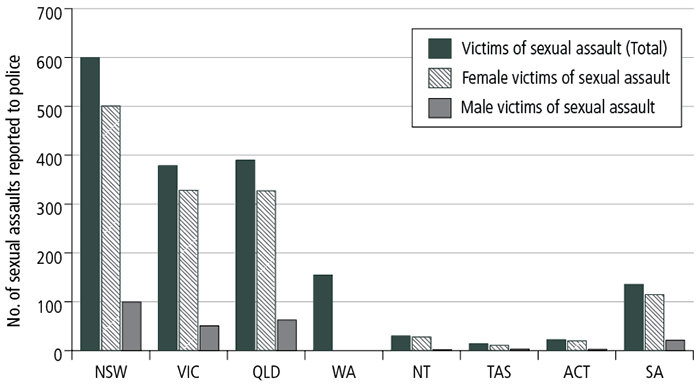 Note: People who did not state their labour forces status or hours on the Census form have been excluded from the calculations. People were classified as working part-time (less than 35 hours per week), full-time (35 hours or more), or away from work. The latter category has not been shown in this figure.
Source: Census of Population and Housing, Australia, online tables.4

For employed men at either end of their working life (15-19 years and 65 years and older), about half are employed part-time and half full-time. For other age groups, employment is mostly full-time. The proportion of full-time employment for men is higher than for women for all age groups.

The main influence on the lower employment rate of women in their late twenties and thirties is the effect of childbearing. Employment rates are lowest immediately following the birth of a child and then increase as mothers re-enter the workforce. Part-time work predominates for women in these age groups.

The best source of data on the employment of mothers with an infant is Growing Up in Australia: The Longitudinal Study of Australian Children. Figure 3 shows the proportion of mothers who have returned to work, and the hours they worked, across age groups of infants aged up to 14 months.6

Figure 3: Mothers' employment and hours worked by age of infant, mothers of infants, 2004

Employment of single and partnered mothers

Maternal employment rates increase as children grow up. But other events can also lead to changes in parents' participation in paid employment. In particular, family separation can have a major impact upon maternal employment, with single mothers having a much lower employment rate than partnered mothers, particularly while children are young. According to data from the ABS Labour Force Survey in 2007:7

The average working hours of fathers with a 4-5 year old child is 47 hours per week. One quarter of fathers usually work 55 hours or more per week.8

Self-employment and working at home

For mothers, self-employment is often taken up as a means of combining work with family responsibilities, while fathers are less likely to take up self-employment for these reasons (Gray & Hughes, 2005). Often self-employment is undertaken, at least in part, from home. The 2006 ABS Time Use Survey provides information on the extent that different groups are self-employed and whether that employment was done more at home than elsewhere.9

Figure 4: Employed males and females, percentage who are working at home and/or are self-employed (own account workers or employers) by life cycle stage, 2006

Note: Self-employed workers are those defined as own account workers or employers, and excludes people self-employed in their own incorporated business, who are classified as employees.
Source: ABS 2006 Time Use Survey.10

Both paid employment and family responsibilities are a part of many people's lives. The nature of both of these varies across the life course. Changes in life stage, such as the birth of a child or the need to care for a sick family member often requires adjustments be made to paid employment. The more we know about the strategies people use to manage this balance, the better informed we will be in developing appropriate policies that help families at all stages of life.

1 Cat. No. 2068.0 - 2006 Census tables, 2006 Census of Population and Housing, Australia, labour force status by age by sex for time series, count of persons aged 15 years and over, based on place of usual residence.

3 Full-time employment is defined as working more than 34 hours per week.

4 Cat. No. 2068.0 - 2006 Census tables, 2006 Census of Population and Housing, Australia, labour force status by age by sex for time series, count of persons aged 15 years and over, based on place of usual residence.

6 Data from the Longitudinal Study of Australian Children (LSAC), 2004.

8 Data from the Longitudinal Study of Australian Children (LSAC), 2004.