This paper aims to answer the questions: What is the public health model and how does it apply to the Australian child welfare and child protection system?

There are many theoretical and conceptual frameworks that inform our thinking about the structure of the service system and the delivery of services to vulnerable families. Prominent approaches include: the developmental–ecological framework, situational crime prevention models, attachment theory, trauma theory, child development, gender theory, victimology, developmental–psychopathology, responsive regulation, community development, the public health model, and models of therapeutic engagement. Theories and models help us to frame our thinking and interpret findings when investigating the nature and prevalence of a problem, its aetiology, or its consequences. Theories and models also help us to plan and review the structure of the service system in responding to problems.

In this sheet, the public health model is applied to the Australian child welfare and child protection system to explore how the service system responds to child abuse and neglect. The model is a prominent theory applied in critical appraisals and strategic planning for the sector (Council of Australian Governments [CoAG], 2009; Scott, 2006). For example, the National Framework for Protecting Australia’s Children 2009–2020 (CoAG, 2009) is based on the public health model. This sheet concludes with a discussion of the utility of the model for identifying service needs and directions.

The public health model is a concept with currency in many disciplines, including health, education and welfare. It is an epidemiological model that attempts to prevent or reduce a particular illness or social problem in a population by identifying risk indicators. Public health models aim to prevent problems occurring in the first place by targeting policies and interventions at the known risk indicators for the problem, quickly identifying and responding to problems if they do occur, and minimising the long-term effects of the problems (World Health Organization [WHO], 2006). In the public health model of disease prevention, preventative interventions are described as either primary, secondary, or tertiary interventions (Tomison & Poole, 2000). When applied to the child protection and child welfare sector, the public health model provides a theoretical framework that spans the service continuum from primary intervention services that target everyone, to secondary intervention services that target families in need, through to tertiary intervention services that target families where abuse or neglect has already occurred (see Figure 1). The targeting of prevention programs at different groups with varying degrees of risk for child maltreatment is referred to as a “composite approach” to prevention. 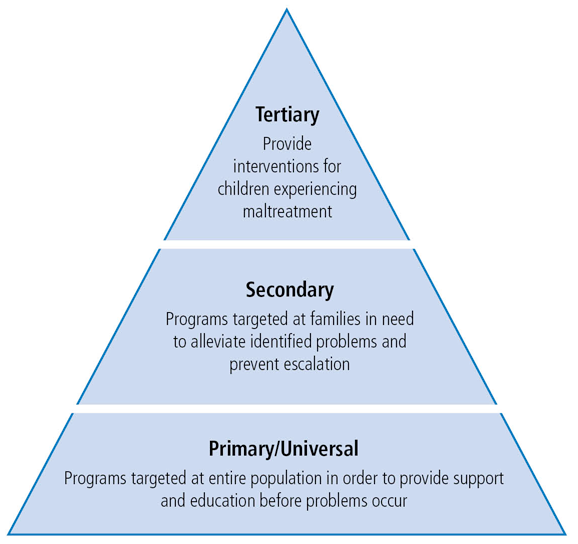 Primary (or universal) interventions are strategies that target whole communities or populations in order to build public resources and attend to the social factors that contribute to child maltreatment. These interventions may focus on changing cultural and societal norms (such as beliefs about the use of corporal punishment). They may also focus on policy and legal reforms, and at alleviating social inequalities (WHO, 2006). Social marketing campaigns are often part of a universal approach to child protection.1 The Australian Childhood Foundation’s “Stop Child Abuse Now” campaign is an example of a social marketing campaign (Australian Childhood Foundation, 2008). The campaign included a range of television, print and radio advertisements to remind the community that unless adults do something, child abuse will continue (Australian Children’s Foundation, 2008).

Secondary interventions target families who are at risk for child maltreatment. The term “at risk” is used to mean families who exhibit risk indicators for child maltreatment. Risk indicators for maltreatment include: poverty, parental mental health problems, marital discord, family violence, and parental drug and alcohol use (Lamont & Price-Robertson, 2013). Note that such risk indicators are not causative (meaning the presence of a risk indicator does not mean that a child will experience maltreatment). However, the presence of identified risk indicators can be a cue to service professionals that the capacity or likelihood of abuse and/or neglect occurring is greater as a child and family’s vulnerability is greater where there is financial strain, family violence and so on. Where families are at risk for child maltreatment (due to the presence of one or more risk indicators), secondary approaches prioritise early intervention. Secondary interventions generally involve early screening to identify children who are most at risk or targeting vulnerable families, followed by a combination of interventions (e.g., home visiting, parent education and skills training) to address the risk indicators for child maltreatment (O’Donnell, Scott, & Stanley, 2008). In order to minimise stigma, and potentially increase participant engagement, universal services such as Maternal and Child Health Nurses, may be used for targeted interventions (O’Donnell et al., 2008). An example of a secondary or targeted intervention is the Communities for Children program which supports organisations to offer programs and activities (e.g., parent support programs and early learning and literacy programs) to children and families living in disadvantaged areas (Department of Families, Housing, Community Services and Indigenous Affairs [FaHCSIA], 2009).

The emphasis on primary and secondary interventions followed greater awareness of the cost of maltreatment (both to individuals and the community). For example, research into the cost-effectiveness of early intervention programs has shown that $1 spent early in life, can save $17 by the time a child reaches mid-life (Blakester, 2006). Further to this, research has suggested that tertiary-level child protection services are not as successful as is often assumed (Geeraert, Noortgate, Griestens, & Onghena, 2004). To illustrate, Geeraert et al. (2004) reported that the difficulty of treating abusive parents at the tertiary level is more pronounced than at the primary or secondary prevention levels, as abusive parenting may have become a fixed pattern of parent–child interaction.

Prevention programs differ in their focus. Some strategies involve working directly with the parent (such as parent education programs), while other programs target children (such as school-based personal safety programs). In contrast, home visiting programs target the family unit, but may differ as to whether the program goals relate to outcomes specifically for the child, the parent, or the family. Table 1 illustrates the way child maltreatment prevention programs can be conceptualised according to a public health model (that is, primary, secondary, and tertiary interventions) based on their level of operation or focus (that is, children, parents or community).

Limitations of the public health model

The evidence base regarding the efficacy of public health interventions is still relatively limited. However, there have been important gains in the last 30 years with some programs such as home visitation programs shown to be effective in reducing child maltreatment (Klevens & Whitaker, 2007; MacMillan et al., 2009; WHO, 2006). Further evaluation of existing public health interventions is required to ensure that programs are effective. Also, one of the requirements of a public health model is accurate data on the prevalence of child maltreatment. An understanding of how often and to whom child maltreatment is occurring is necessary in order to target primary and secondary programs. Currently there is no accurate prevalence data available in Australia (Scott, 2013).

A further issue is that although the public health model attempts to categorise programs and services as primary, secondary or tertiary, the complexity of issues around child protection leads to a need for some programs to be both primary and secondary, or secondary and tertiary. For example, a parenting program may include parents who have been referred because their children are considered to be at risk of abuse and neglect. The program may also include parents who have been referred from child protection services because their children have already experienced actual abuse and neglect and they are required to complete the program to help ameliorate the risk of further maltreatment. Another example that illustrates the difficulty of rigidly applying the public health model to child maltreatment interventions can be found in the use of therapeutic treatment programs for maltreated children. For example, therapeutic interventions for maltreated children can be considered tertiary interventions (as maltreatment has already occurred) and also secondary interventions as addressing the consequences of maltreatment may reduce the likelihood of inter-generational effects (Tomison & Poole, 2000).

In Australia the public health model is currently the dominant model of child protection as can be seen in the National Framework for Protecting Australia’s Children 2009–2020 (CoAG, 2009). Even so, the public health model is still considered the ideal rather than the reality by many. As noted by the Australian Research Alliance for Children and Youth, many practitioners believe that instead of the pyramid model shown above, the system in Australia as it currently exists is more of an inverted pyramid or hour glass with most focus still at the tertiary end of the continuum or at the tertiary and primary sectors with little focus on secondary interventions (The Allan Consulting Group, 2008).

While there are some limitations to the public health model with respect to clearly identifying prevalence rates and where programs “sit” along the service continuum (i.e., whether primary, secondary or tertiary services), the public health model is one of the most useful and widely applied frameworks for strategic planning regarding service provision (e.g., recognising the types and range of services needed and identifying service gaps along the continuum).

In summary, according to the public health model, primary, secondary and tertiary services are all critical elements in the child welfare and child protection system. However, a well-balanced system has primary interventions as the largest component of the service system, with secondary and tertiary services progressively smaller components of the service system. Investment in primary prevention programs has the greatest likelihood of preventing progression along the service continuum and sparing children and families from the harmful consequences of abuse and neglect.

This Fact Sheet is based on extracts from The Effectiveness of Parent Education and Home Visiting Child Maltreatment Prevention Programs (NCPC Issues No. 24).

2 An example of increasing attention on the primary and secondary service systems, the National Framework for Protecting Australia’s Children 2009–2020 initiative has a strong preventative and early intervention focus (CoAG, 2009).

Previous versions have been compiled by Cathryn Hunter and Prue Holzer.

The feature image is by Clint Mickel, CC BY-NC-SA 2.0.