Financial support in this research snapshot refers to the support between adult family members who may not live together, not the financial provision for children (under 15 years of age) or sharing financial resources between partners.

Financial support between family members can take various forms. It can involve occasional or regular payments, paying for small or large purchases (including housing1), or an in-kind approach (e.g. paying bills).

Financial help is often valued during times of transition; for example, when there are housing or care needs and during times of financial difficulty, as can occur with accidents, illness or job loss.

Using the data from a range of sources, including the Longitudinal Study of Australian Children and the Household, Income and Labour Dynamics of Australia (see 'Acknowledgements' for details), this snapshot focuses on the extent to which people report giving and receiving financial support:

It also looks at general attitudes towards inter-generational support.

This difference between giving and receiving rates is partly related to the survey under-representing younger people. However, more generally, research (e.g. Mandemakers & Dykstra, 2008) has found that people tend to over-report giving help and under-report receiving it.

The giving and receiving of financial help between family members is strongly related to age (see Figure 1). For instance, in the Families in Australia Survey, November-December 2021, 39% of 18-29 year olds reported they received occasional or regular financial help - compared with only 14% of people aged 60 or more.

On the other hand, 62% of those aged 60 years and over occasionally or regularly gave financial help - compared with 33% of 18-29 year olds. 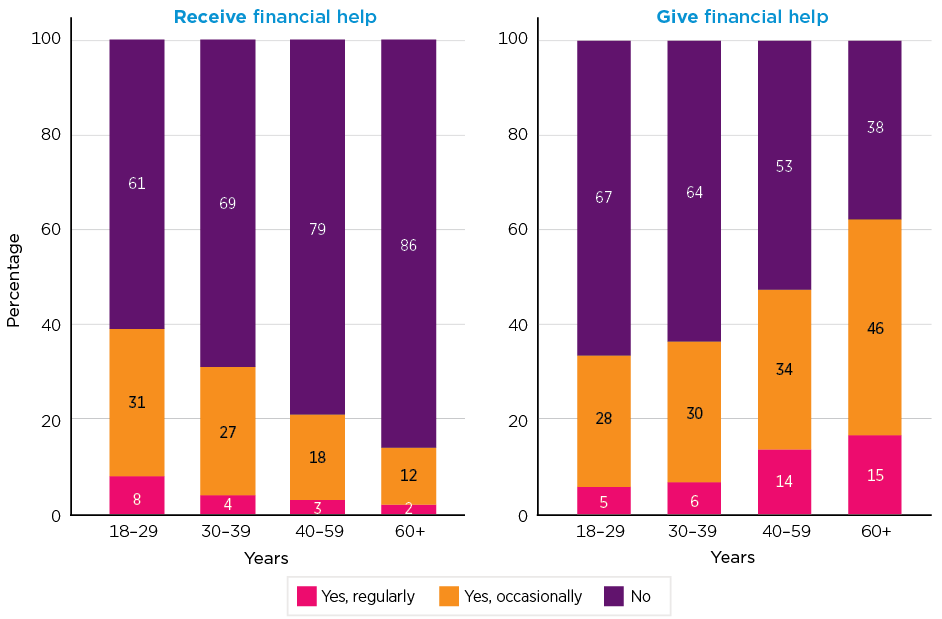 A similar story emerges from the 2019-20 HILDA data. Financial transfer from parents was reported by:

Financial transfer from parents falls swiftly as their children age; for example, from 15% of 22 year olds to 9% of 24 year olds.

The proportions vary from year to year but the general pattern is a fall from around half of 15 year olds, to one in six 22 year olds, to around one in ten 24-year olds.

Table 1 also provides a perspective of family financial support by comparing the extent and amount of government income support that young people received. An interesting finding is that very few people reported receiving payments from parents as well as from the government, such that these different forms of financial assistance are typically going to different groups of people.

For all age groups, the value of the government transfers is substantially greater than that of parental payments - but particularly for the group aged 15-24 years.

Notes: Median amounts for inheritance/bequest and from another person outside the household are not shown as the sample sizes were too small to examine these statistics by age. There were also too few inheritances/bequests to tell if the age of the recipient made a difference to the value.

Family support in the time of financial difficulty

Family is a very common source of financial help and emergency money. The Australian Bureau of Statistics reported that in the December 2020 quarter, about one in 10 people had gone to family or friends for financial help in the past year.

Comments from Families in Australia Survey participants (November-December 2021) show some of the ways that family members help each other:

I have financially supported my daughter for 18 months or more as she lives alone, was unemployed and could not afford rent and living expenses from government support.
71-year-old female

Child who lives with me has taken over paying for all food/shopping requirements, which helps when unemployed.
63-year-old female

In the past year, the most important help was the loan of some money from a family member so I could buy a much-needed car at a time when my income was reduced.
69-year-old female 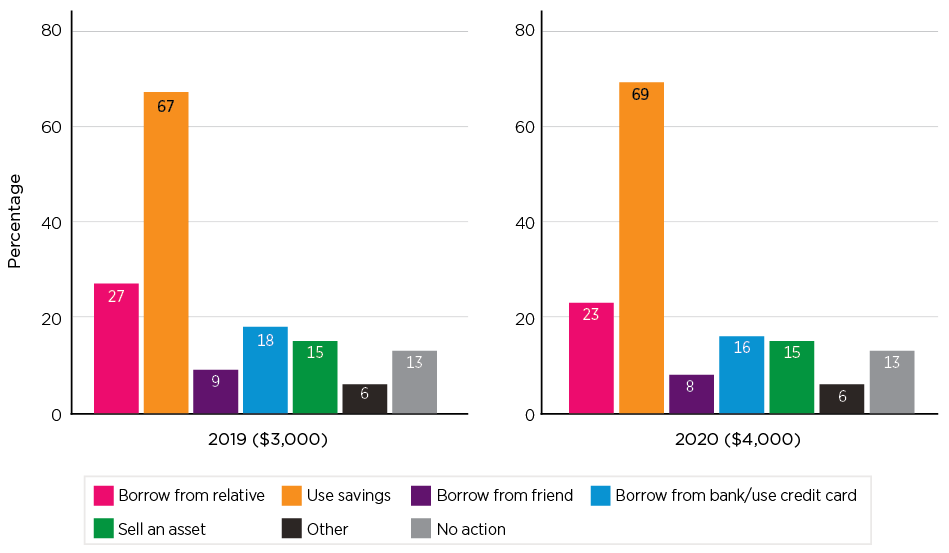 Figure 3: Proportion reporting they would go to a relative for emergency money 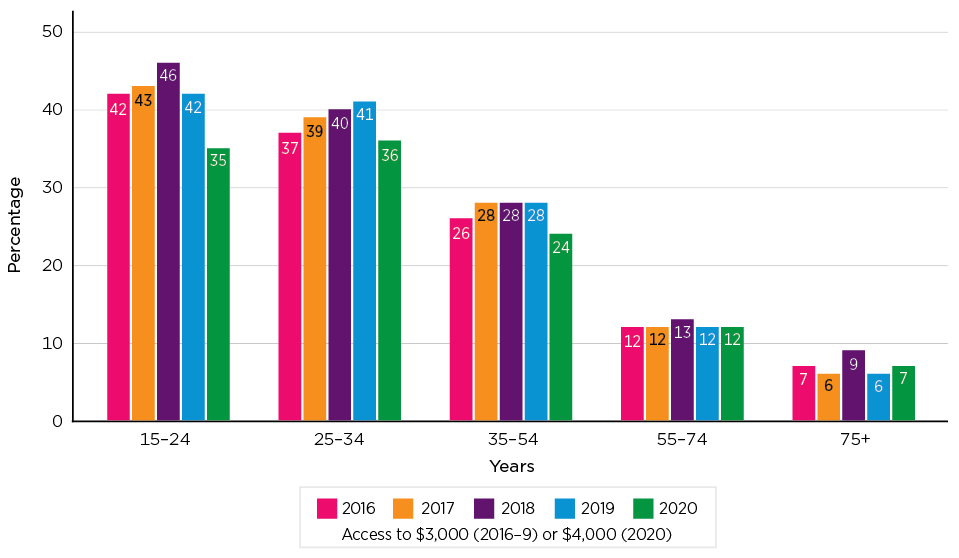 Financial support for young people during the COVID-19 pandemic

The COVID-19 pandemic and associated restrictions had financial impacts on some people, through changes to employment, job losses, standdowns and reduced working hours.3 In this section we consider how young people's financial help from parents may have changed with the onset of the pandemic.

Data collected for LSAC in late 2020 captured some insights about young people's need for financial support from parents, and how it had changed since the start of the COVID-19 restrictions.4 At this time, the younger (B) cohort of LSAC was aged 16-17 years and the older (K) cohort was aged 20-21 years.

Among these two cohorts, just over a half indicated they had not needed financial help from their parents or other family members in the previous year (57% of 16-17 year olds and 54% of 20-21 year olds). A very small percentage (around 4%) indicated they needed less financial help than usual during the restrictions.

Table 2 shows that not being employed made the 20-21 year olds nearly twice as likely (29% vs 16%) to need help during the restrictions.5

Notes: Employment status is as at the time of the survey. Unweighted percentages. Percentages may not sum to 100.0 due to rounding.

If responses to all four questions are explored together, about one in five agreed (or strongly agreed) with all four statements.

The least likely to agree to all four statements were those aged 60 or more. Compared to younger age groups, these participants were not so likely to agree that adult children should let their ageing parents live with them if needed.

There was a strong 'it depends' element to many of the comments. The nature of the relationship between the adult children and their parents was seen to matter, along with factors such as the health or caring needs of one of the family members.

I feel uncomfortable saying kids or parents should support each other in particular ways. Families are too varied for me to want to take a strong stand on how they must act.
25-year-old female

It should depend on their means to be able to support others as well as where they are at in life.
36-year-old female

I think if adult children require financial assistance it should be given as a loan, not a gift, or they will remain financially dependent and live outside of their own means. If they need to move back home they should contribute financially and help around the house. In the same way, I have accrued sufficient superannuation to be sure that I am not a financial burden on my children in my old age, but I would like to live with my daughter when the time comes.
51-year-old female

Figure 4: Agreement about the support between adult children and parents 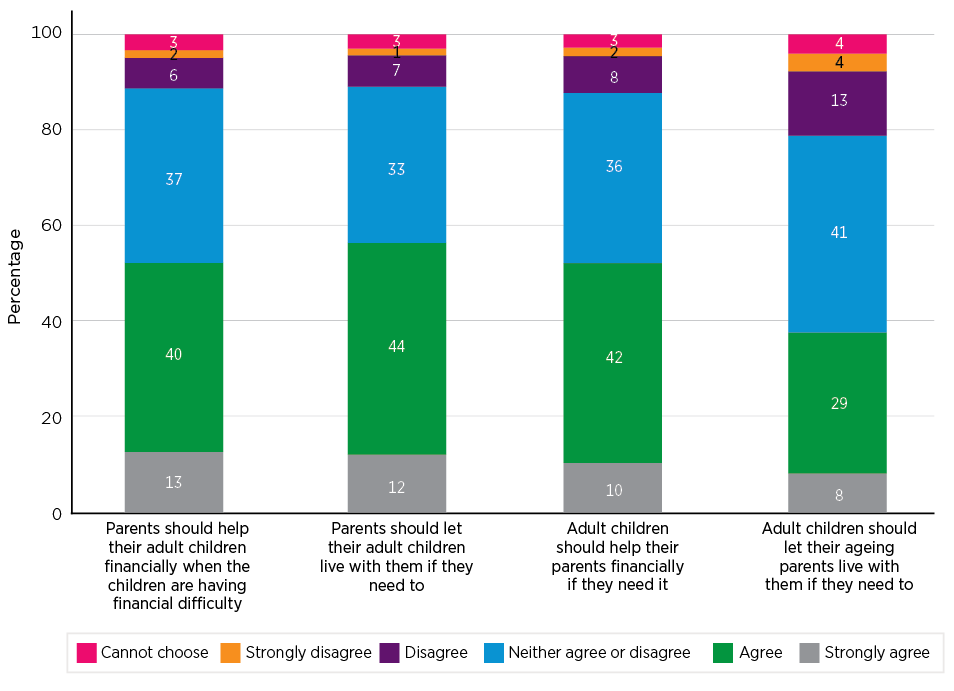 1 There is very little information on the extent to which people have financial help from parents in their home purchase. An analysis by Cigdem-Bayram, Whelan, and Wood (2018) used the longitudinal HILDA data to demonstrate that bequests from parents were associated with higher rates of home ownership. Information on 'the Bank of Mum and Dad' is published by financial institutions, suggesting parents are an important lender for this purpose. See What is the Bank of Mum and Dad? | Savings.com.au

2 Those who reported they did not think they could obtain this amount of money were coded as not taking any of the actions.

4 Participants were asked to reflect on circumstances experienced during the coronavirus restriction period, which was defined as the period when governments first put in place restrictions and recommendations designed to curb the spread of COVID-19. For most Australians, this was between March and May 2020. If they reported having needed some financial support from parents in the past year they were asked, 'Since the beginning of the coronavirus restriction period, how much support have you needed from your parent(s) or other family members, for financial support (e.g. giving/loaning borrowing money, or helping you purchase goods, paying bills/fees) compared to usual?' These data are sourced from the 9C1 release of LSAC. See data note at the end of the report.

5 The 20-21 year olds' reports of changing need for financial support were also compared according to whether they were living independently or with parents but responses did not vary significantly for these two groups.

This research snapshot draws on a number of data sources, including:

The authors wish to thank Tracy Evans-Whip and Jennifer Prattley for the contribution of the LSAC 9C1 data, and the AIFS Communications Team.