This snapshot highlights key findings about grandparents providing child care from the Grandparents and Child Care in Australia research report. It uses responses from 2,383 grandparents (mostly grandmothers) who completed the third Families in Australia Survey in May-June 2021.

Two in five grandparents with a grandchild aged under 13 years were providing some child care.

Whether grandparents worked or not made no difference to whether they provided child care. However, those working full-time hours were less likely to provide long hours of child care.

Figure 1: Frequency of child care by grandparents, by age of youngest child

Grandparents more often provided child care on a casual or occasional basis (62% of those providing child care), compared to regular (39%) or school holiday (26%) child care. About one in five grandparents provided a combination of these. 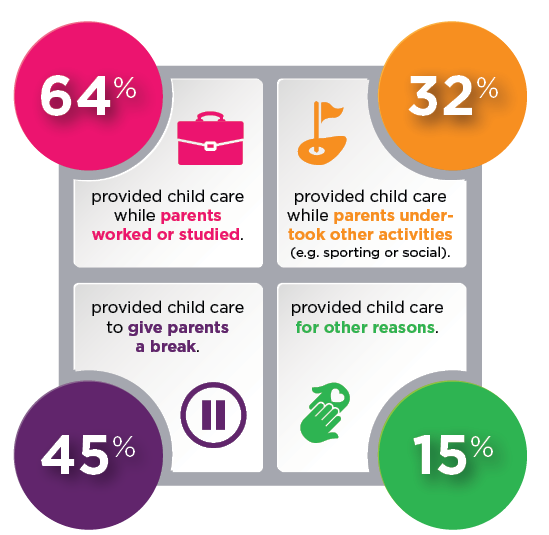 The experience of providing child care

Providing child care was typically a positive experience for grandparents (e.g. 97% reported they enjoy providing the care, including 72% who strongly agreed with this; see Figure 3).

Nearly half the grandparents indicated that providing child care could be tiring. But even among these grandparents, most said that they enjoyed providing the care and that it increased family connections.

Grandparents providing longer hours of child care more often reported that providing child care was difficult to manage alongside other activities and responsibilities.

Grandparents were asked if they had grandchildren they would like to care for but do not.

Figure 4 shows some of the barriers to providing child care. The barrier most often faced was distance. The next most often experienced barrier was a breakdown in the family relationship.

Figure 4: Barriers to providing child care to grandchildren among grandparents who would like to provide child care (or more child care)

More than 1,000 grandparents provided a comment about their grandparenting in the survey. See Grandparents and child care in Australia research report for more findings from these responses.

Very often they expressed their positive feelings about grandparenting, even if challenges were noted at the same time. For example:

I enjoy it very much and they are always pleased to have me care for them. It's a wonderful time watching them grow up and learn things.
Grandfather, aged 66

Although tiring, caring for our grandchildren is the most joyful and meaningful activity we have, the time we didn't have as parents, we now have to care for and enjoy our grandchildren. We are also aware this is a window of opportunity of about five years in each child's lives before they branch out into the wider world.
Grandmother, aged 74

I wish we could provide more child care but due to husband's disability not able to. Grandchildren have no other family supports at all.
Grandmother, aged 70

I would love to see her more frequently, but when not in lockdown I am working at every possible moment in casual jobs to pay my bills.
Grandmother, aged 65

Some grandparents commented that they spoke up when requests for child care were too demanding or too disruptive and indicated this helped minimise negative impacts.

See the full report for more detailed findings, and more information about the survey, the questions and analysis used.

A convenience sampling approach is used, which means the survey reaches a broad range of Australians through promotion of the survey on social media platforms, traditional media outlets and contact through mailing lists and direct approaches to contacts. In total, there were 5,985 participants to this survey, including 2,383 aged 40 years and over who indicated they had grandchildren. Most (2,095) were female. The convenience sampling approach and reliance on an online survey results in some biases. It is not likely to represent the experiences of all demographic groups, including those from lower socio-economic backgrounds and non-English speaking backgrounds. Grandparents and child care in Australia

This research report focuses on this caring role, exploring grandparent child care from the perspective of the… Relationships within the family This snapshot reports on families’ experiences of financial concerns and stresses at May–June 2021, as captured in the…