Service support plays an important role in helping carers to cope with the care demands of having an out-of-home-care child. This Research Snapshot focuses on carers' reports on their access to and views on service support.1

Carers were initially asked about whether they had ever used various types of services while a child was in their care as part of an out-of-home-care placement. For the services that carers reported using in the past, they were then asked whether they had used the service in the past six months (or for study children who were no longer in the household, whether they were used in the last six months the child was present in the household).

Table 1 present the proportion of carers that had used each type of service in the past six months:

Notes: Percentages are based on weighted data and small numbers of respondents' "Don't know" answers were included in calculating percentages (0.01%-1% of all carers across the items listed). Sample sizes are unweighted. aOnly asked of study children earlier identified as being of Aboriginal and/or Torres Strait Islander origin.

Carers who had used various services in the past six months were asked how helpful they had found each service. While carers tended to perceive the services they had used as being helpful (i.e., at least 80% of carers rated each type of service as being either "very" or "fairly" helpful), Figure 1 shows that there was some variation between the services in how helpful carers perceived them to be:

Figure 1: Carers' views on the helpfulness of services received for services used in the past six months 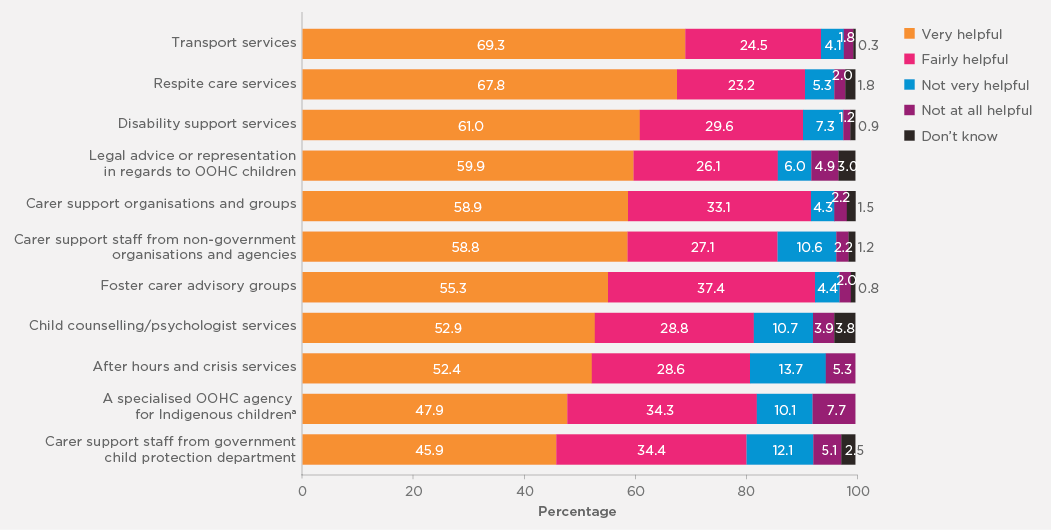 Notes: Percentages are based on weighted data. Unweighted sample sizes range from 131 to 750. a Only asked of study children earlier identified as being of Aboriginal and/or Torres Strait Islander origin.

Figure 2: Carers with unmet service needs (i.e., currently needed the service, but had not received it in the past six months or ever)

Notes: Percentages are based on weighted data. aOnly asked of study children earlier identified as being of Aboriginal and/or Torres Strait Islander origin.

Carers who reported having required one or more types of services (including those currently used) were asked about whether they had any difficulty in getting the professional service/support they needed.

Those who had difficulties were asked about the reasons and their responses are shown in Table 2:

Notes: Percentages are based on weighted data. The sum of responses may exceed 100.0% due to multiple responses.
a Responses were recorded based on carers' verbatim responses. b Only includes carers who said that they had difficulties accessing services.