This Research Snapshot focuses on carers' reports on training they had received and the degree of contact with their caseworker.1  The first Research Snapshot shows that many children in out-of-home-care have previously experienced abuse or neglect or been exposed to family violence or other problems at home, which has had serious negative effects on their wellbeing. Indeed, according to carers' reports, one-third of carers reported that the study child had at least one type of developmental condition. Providing carers with training courses or workshops can provide them with support and skills to deal with children's difficult behaviours and better cope with caring demands.

Carers were asked a series of questions about whether they had ever attended a training course to assist them in their role as a foster or relative/kinship carer, and whether they had done so in the past 12 months.

Close to two-thirds of carers (62%) reported having ever attended some form of training course or workshop to assist them in their caring role in the past, and 40% of carers reported having undertaken training in the last 12 months.

Carers who had participated in a training course or workshop over the past 12 months were asked how helpful they had found it.

Carers who had never attended a training course or workshop were asked about whether they felt that doing so would have been helpful to assist them as a carer:

Foster carers who had not undertaken any training were more likely than relative/kinship carers to believe that doing so would have been very or fairly helpful (57% vs 38%).

What training do carers say they want?

A selected sample (n = 39) of carers who said that receiving training would have been very or fairly helpful were asked to specify what types of training courses/workshops would have been helpful to support them as carers.

"Anything to help to support the emotional issues that arise with the children and gain a better understanding of the behavioural issues that may arise." (Relative/kinship carer)

"Courses that help you with child difficulties and how you can help them with their difficulties." (Relative/kinship carer)

Caseworkers (also known as carer support workers) are an important source of support for carers. Caseworkers can provide direct support as well as information/services referral. Table 1 summarises carers' reports regarding how often they had contact (face-to-face, phone calls, emails, etc.) with a caseworker or carer support worker about the study child.

Notes: Percentages are based on weighted data. The sum of responses may exceed 100% due to rounding. Excludes carers with a response of "don't know".

Carers who were in contact with a caseworker most commonly indicated that he/she was from a government department (70%), with just over one-third (35%) indicating that their caseworker was from a non-government organisation or support group. A minority (7%) of carers had contact with more than one caseworker. 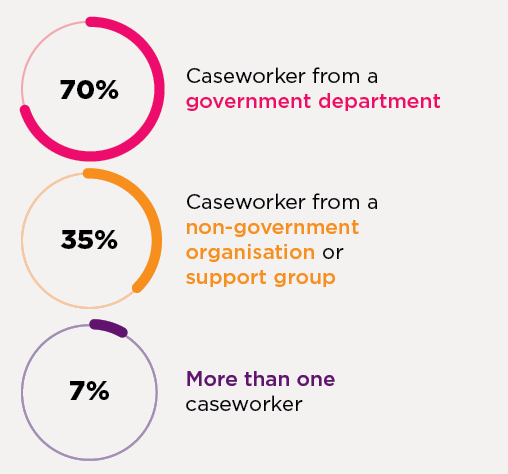 Carers who were in contact with a caseworker were also asked about how satisfied they were with the advice or assistance they received in their most recent contact.

A sample of carers who indicated that they were dissatisfied or very dissatisfied with the most recent contact they had with their caseworker/carer support worker were asked the reasons for their dissatisfaction: